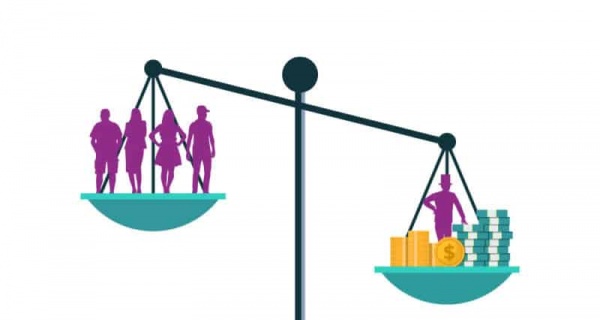 In March, as the pandemic took hold in the United States, major retailers announced hazard pay or special bonuses for workers. This money was intended to compensate frontline workers for the additional risk of working during a deadly pandemic. In general, the increases were modest. A new Brookings study of 13 large retailers found they "raised pay for their frontline workers by an average of just $1.11 per hour."

The pandemic never was brought under control, but as the case numbers waned over the summer, most of the retailers quietly rolled back hourly increases or stopped paying out bonuses.

While the pandemic has devastated small businesses and forced many to shutter permanently, large retailers are raking in record profits. In the third quarter of 2020, most major retailers saw double-digit increases in profits compared to a year earlier — which means billions in extra profit. Profits for the 13 companies in the Brookings study increased an average of 39%. Their stock prices are up an average of 30% since the beginning of the pandemic. This has translated into huge increases in personal wealth for CEOs and other executives.

This fall, the pandemic is raging across the country. In mid-April, when most of the pay increases were in effect, hospitalizations peaked at about 60,000. Today, more than 83,000 people are hospitalized due to COVID. The risk of working in a grocery store or warehouse is higher now than ever before. But most major retailers — including Amazon, CVS, Walmart, and Kroger — are not reinstating their hazard pay.

While frontline workers put their lives on the line, the fruits of their labor are going to executives and investors who are safe at home. The United States is suffering from both a COVID pandemic and an epidemic of corporate greed.

Bezos gets $73 billion; Amazon workers get 95 cents per hour

Amazon recently reported $6.3 billion in third-quarter profits – a 200% increase from the same period last year. So far in 2020, the company has drawn over $17 billion in profits, with its stock up by 65%. CEO Jeff Bezos has added approximately $73 billion to his wealth, reports Business Insider, making him “undoubtedly...the biggest beneficiary of the pandemic.”

Of course, none of this would have been possible without Amazon’s frontline employees. “Our top priority is ensuring the health and safety of our employees,” insists the company.

This temporary pay raise and bonus, however, represented just a 6% increase in compensation, according to the Brookings report. Put differently, workers have only earned $1,369 (or $0.95 per hour) more over the course of the pandemic. Meanwhile, Amazon reports that 2020 has been its most profitable year ever.

“The company could have quadrupled the hazard pay it gave frontline workers and still earned more profit than the previous year,” according to the Brookings report. It calculates that the total cost of Amazon’s pay increase and bonuses amounts to $1.3 billion and “comprise[s] just 9% of Amazon’s profits for the first three quarters of the year."

Additionally, as Amazon celebrates its profit milestones amid the pandemic, workers have continued to bear the brunt of the COVID crisis. In October, the company shared that at least 19,816 frontline employees tested positive for COVID since March. Many workers have criticized the company for its inadequate safety measures and for endangering employees.

Earlier this month, CVS shared that it has so far earned over $6.2 billion in profits in 2020. This is $1.3 billion more than the company earned during the same time last year. Yet, since the pandemic, the only COVID-19 compensation CVS has offered its employees was a one-time bonus in March that ranged from $150 to $500.

“In recognition of the essential role CVS Health employees are playing as the country faces the COVID-19 pandemic, the company is awarding bonuses to employees who are required to be at CVS facilities to assist patients and customers in this time of unprecedented need,” wrote the company.

But the bonus, Brookings finds, is equivalent to a “2% pay raise when averaged from mid-March to mid-November.” This contrasts with the 27% increase in profits CVS recorded during the pandemic.

Further, despite the soaring profits, workplace safety remains an issue. In August, Business Insider reported that CVS employees in Tennessee, Missouri, and Arkansas “said that the pharmacy chain ignored reports of potential COVID-19 exposure at stores and required sick or quarantined employees to come to work.” On its website, the company asserts that “employee safety has been a focus for CVS Health from the start.” It's now been more than 242 days since CVS employees have received any form of hazard pay.

Walton family adds $45 billion to its wealth; Walmart workers get 63 cents per hour

Last week, Walmart announced that its net income has so far risen 45% this year to a record $15.6 billion. Brookings reports that with share prices up 41%, the Walton family, who own more than 50% of the company, have added more than $45 billion to its wealth. The retailer also spent $500 million repurchasing its shares last quarter. As of October 31, the company had over $14 billion in cash on hand.

Walmart employees, on the other hand, have only received $900 since the beginning of the pandemic. Since March, Walmart has given employees three cash bonuses ranging from $300 for full-time employees to $150 for part-time employees. Brookings calculates that the bonuses, when averaged from mid-March to mid-November, are equivalent to an extra $0.63 per hour. As one of the largest employers of food stamp and Medicaid beneficiaries, these bonuses are wildly insufficient.

“Our associates have been working at an incredible pace, they’ve solved problems, and they’ve set an amazing example for others,” said Walmart CEO John Furner in July.

The last bonus was disbursed in August. At the time, Walmart boasted that it had given “$1.1 billion in bonuses so far this year.” But this amount comprises less than 8% of the company’s total profits in 2020.

“With the additional profit Walmart earned in the first three quarters of the year compared to last year, the company could have offered bonuses to associates that equated to nearly an extra $2.50 per hour and still have earned more profit than the previous year,” reports Brookings.

Kroger, the nation's largest supermarket chain, reported over $2 billion in profits in the first half of 2020 — a 90% increase over the same period last year. In the second quarter alone, profits were up 176%. The company's stock price has risen about 15% since the beginning of the year.

On March 31, Kroger announced it would raise pay by $2 per hour for "all hourly frontline grocery, supply chain, manufacturing, pharmacy and call center associates." The company called this increase a "hero bonus" in recognition of hourly employees "working tirelessly on the frontlines to ensure everyone has access to affordable, fresh food and essentials during this national emergency." The extra pay was warranted, Kroger said, because "this crisis is far from over." The company has spent hundreds of thousands of dollars on TV ads publicly "thanking" its employees for their hard work and dedication.

But on May 17, Kroger rolled back the pay increase. "The temporary Hero Bonus is scheduled to end in mid-May. In the coming months, we know that our associates’ needs will continue to evolve and change as we all work together to gradually and safely reopen the economy," Keith Dailey, Kroger’s vice president of corporate affairs, said.

It has been 181 days since workers received any pay increase. But on September 11, "the company authorized a new $1 billion share buyback program." Stock buybacks increase the stock price by reducing the number of shares available, which will drive compensation for McMullen and other millionaire executives higher.