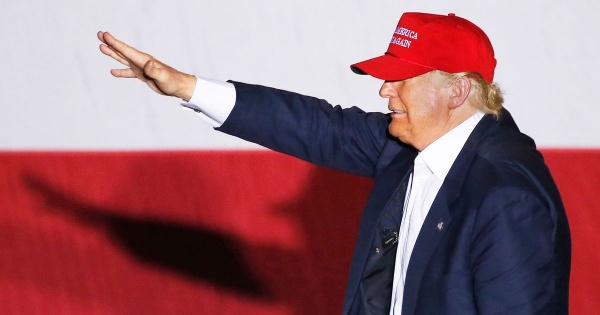 Gibberish is the only word that comes close to describing what Donald Trump and the GOP are trying to sell as a rationale for overturning the results of a presidential contest and disenfranchising some 80 million Americans.

The legal strategy they advanced this week at the direction of Rudy Giuliani isn’t creative lawyering. In fact, it no longer has any legal basis at all. It’s not even recognizably related to the law as we know it in this country. It was simply an old man sweating profusely, shaking his fist at the clouds, and yelling “Because!” in support of what he believes is owed to him.

As the lawsuits wound down in most states, the Trump campaign had gone 2-33 in post-election litigation by Friday evening. One attorney following the twists and turns tried to explain to non-lawyers what their legal stylings resembled to the trained eye.

“Non-lawyer followers: this litigation (in all the states) is truly blowing my mind. It’s as if you’re playing chess and your opponent lets off a whoopie cushion, throws a Zebra Cake on the board, and then runs off without pants and says they won,” wrote appellate lawyer Raffi Melkonian. “I don’t know what else to say.”

As it became clear that Trump’s attorneys were nearing the end of their legal quivers, Giuliani and several other usual Trump suspects and Fox News favorites lined up for a mindblowing press conference, beamed in straight from Planet Trump fantasyland. Weaving a wild tale of widespread conspiracy, Giuliani appeared to literally melt down as freakish black streaks of what was presumably hair dye rolled from his temples.

“This is not a singular voter fraud in one state,” he charged, “the pattern repeats itself in a number of states—almost exactly the same pattern.” Naturally, Giuliani’s imaginary conspiracy centered not only on “big cities,” but “big cities controlled by Democrats … that have a long history of corruption.”

You know the ones—those big cities of Detroit, Milwaukee, and Philadelphia, where people of color turned out in historic numbers to make their voices heard and help secure a Biden-Harris victory. Those were the “trouble spots,” and the places where the Trump campaign has repeatedly tried to invalidate votes and overturn the election results.

At base, it was a strategy built on the rank racism native to both the American system of government and the impulses of Trump’s most rabid supporters. The problem Trump’s bidders ran into in the courts, however, was that they had to provide actual evidence in support of their claims—evidence they failed to produce in every case they brought. In fact, in most of those cases, the attorneys didn’t even allege voter fraud had occurred—because lying in a court of law is a punishable offense. “This is not a fraud case” is exactly what Giuliani himself told a federal judge in Pennsylvania earlier this week.

So just as soon as their string of legal losses was coming to a close, Giuliani and Co. ran to the mics where they could lie with abandon. And lie they did.

Giuliani spun just the type of wackadoodle conspiracy that Trump’s troops gobble up. Sidney Powell, another Trump lawyer with a penchant for the absurd, said the voting systems in many states used software “created in Venezuela at the direction of Hugo Chávez to make sure he never lost an election.”

But Powell’s most convincing coup was mustering up the trappings of raw emotion, including the hints of a quiver in her voice, as she declared the imaginary fraud “stunning, heartbreaking, infuriating, and the most unpatriotic acts I can even imagine for people in this country to have participated in.”

Moving to an air of defiant determination, Powell continued, “And I want the American public to know right now that we will not be intimidated. … President Trump won by a landslide. We are going to prove it. And we are going to reclaim the United States of America for the people who vote for freedom.”

If what Powell claimed were true, then she, Giuliani, and several high-powered law firms must be among the worst legal minds in the country, since they’ve failed to prove even a single occurrence of fraud in nearly three dozen allegations.

Nonetheless, the Twitter account for the Republican National Committee packaged up footage of Powell’s charade, including her outrageous claim about Trump’s “landslide” win, and promptly tweeted it out—putting the GOP’s official imprimatur on Trump’s trashy assault on the integrity of our elections and the sanctity of our democracy.

Jay Rosen, a journalism professor at New York University, tweeted that the GOP had “made official its break with American democracy.” Not that it wasn’t already apparent, he added, “Just more official now. As ridiculous as Sydney Powell is, this is a sobering moment.”

It was a sobering week, indeed. The leadership of the entire Republican party—including the RNC and congressional leaders Mitch McConnell and Kevin McCarthy—all effectively endorsed Trump’s scorched-earth attempt to burn American democracy to the ground. Whether they outright fanned the flames or simply stood by and watched the spectacle, they were equally complicit.

McConnell, in his unending duplicity, had the nerve to once again promise “an orderly transfer” of power on Tuesday even as the head of the General Services Administration, Emily Murphy, continued to block Biden’s transition team from accessing critical governmental resources and intelligence.

After two weeks of nearly all Republican lawmakers insisting Trump had the right to make his case in the courts, almost none of them stepped forward to state the obvious—Trump clearly had no case to make. Sen. Mitt Romney of Utah stood alone in denouncing Trump’s brazen attempt to “subvert the will of the people and overturn the election.” Sens. Ben Sasse of Nebraska and Susan Collins of Maine at least joined Romney in criticizing Trump’s efforts.

But frankly, those three meager breaks with Trump are cold comfort when the bulk of the Republican party has spent a solid two weeks backing what is nothing short of a fascist attempt by Trump retain his grip on power.

In fact, what became perfectly clear is that if this election had been just a smidge closer—perhaps with slimmer margins in just one or two tipping-point states—Republicans would have gladly lined up behind Trump’s authoritarian power grab.

Instead, they are mostly standing by while Trump trashes the nation on his way out the door, leaving Joe Biden with an unprecedented number of raging fires to put out between the surging pandemic, sputtering economy, rampant disinformation, and America’s diminished standing on the world stage.

Republicans’ anti-democratic and unpatriotic support for Trump’s post-election meltdown is, in fact, treasonous.

As Romney said, “It is difficult to imagine a worse, more undemocratic action by a sitting American President.” And a major American political party.