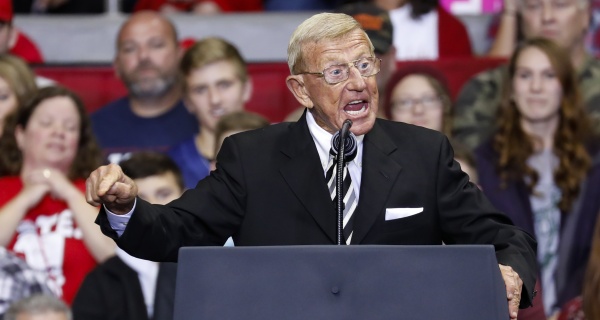 The 83-year-old former ESPN analyst told ABC Columbia that he was feeling lethargic.

“I don’t have a lot of energy right now,” Holtz said.

Holtz is not the first legendary former college football coach to reveal a COVID-19 diagnosis. Former Florida State coach Bobby Bowden was hospitalized with COVID-19 earlier this fall. Bowden said in a statement after he was discharged from the hospital that he wanted to survive COVID-19 so that he could vote for President Donald Trump in the Nov. 3 presidential election.

After a two-year break, Holtz became South Carolina’s coach in 1999. He coached six seasons at South Carolina and had a record of 33-37. Before Notre Dame, Holtz coached at William & Mary, NC State, Arkansas, and Minnesota.

Holtz has become more known for his political appearances recently. Like Bowden, Holtz is an avowed Trump supporter. He gave a speech at the Republican National Convention in August and questioned President-elect Joe Biden’s Catholic faith.

Holtz’s remarks drew a quick rebuke from Notre Dame. The school said the next day that Holtz’s use of his status as Notre Dame’s former coach “must not be taken to imply that the University endorses his views, any candidate or any political party.”

Holtz compared playing football in a pandemic to Normandy

In August, Holtz said that college football teams should go ahead and play football as scheduled in the middle of the COVID-19 pandemic. He compared playing the season to the World War II storming of Normandy in a Fox News appearance.

“When they stormed Normandy, they knew that there were going to be casualties, there was gonna be risk,” Holtz continued. “Two percent of the people that go to the emergency room go for COVID-19. But young people, Bill, they think it’s like cancer. They think they’re gonna die.”