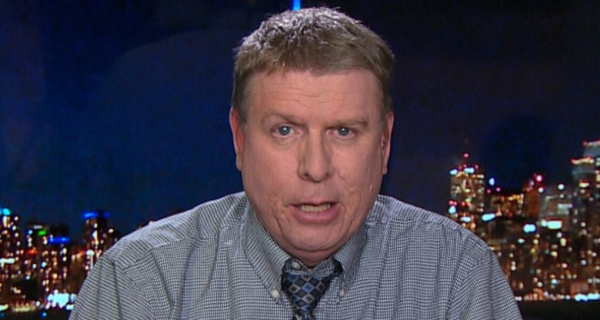 One of the baseless theories spread by Trump’s lawyer Sidney Powell on Thursday was ignited online by a far-right Canadian website and Toronto’s most notorious tabloid columnist.

Alongside the QAnon fans and former Breitbart reporters you’d expect to find in the fetid swamps from which the president’s legal team fished out their latest baseless claims, this week saw the emergence of a new conspiracy ground zero: Toronto, Canada.

Specifically, some of the claims pushed by the president’s lawyer Sidney Powell on Thursday seem to have been popularized by a far-right Canadian website whose correspondent used to be a white supremacist webstore merchant and Toronto’s most infamous tabloid columnist, Joe Warmington.

Warmington is a Trump-boosting writer for the Toronto Sun, who sometimes wears a novelty fedora, calls himself the “Night Scrawler” and was once the mouthpiece of crack-smoking Toronto mayor Rob Ford.

Powell, who has repeatedly made false allegations that electronic voting systems switched ballots to support President-elect Joe Biden, had a new twist on her claims at the press conference that turned Rudy Giuliani’s hair dye into a global phenomenon.

Central to her false claims is the voting machine company Dominion Voting Systems, whose international headquarters is in Toronto.

"They are moving their offices overnight to different places, their offices in Toronto were shared with one of the Soros entities,” Powell alleged, at a press conference in New York on Thursday, in an attempt to tie Dominion to George Soros.

The billionaire investor, known for giving to progressive causes, is frequently invoked in right-wing conspiracy theories as a secret financier of liberal plots.

On November 14, he staked out the Toronto offices of Dominion, a day after former Breitbart reporter Patrick Howley claimed the company “shares floor space” there with a “Soros Group.” Howley’s claim was based on address listings that place Dominion and the charity Tides Canada, the alleged “Soros Group,” in the same downtown Toronto building.

In a since-deleted tweet, Warmington—who has a habit of Tweeting about Soros and “globalists”—noted that lights were still on in the building at night, a claim that Powell seems to have picked up in her allegation that Dominion was “moving their offices overnight to different places.”

Warmington—who had a column retracted earlier this year when he included fake Drake lyrics and once staked out a rival newspaper’s office after one of its reporters died by suicide—also posted the address listing for Tides Canada.

But that’s where the conspiracy unravels. Tides Canada, which rebranded to Makeway in June, moved its Toronto offices to another building last year, according to charity spokesperson Norah Murphy.

It is also not affiliated with George Soros in any way. While the U.S.-based Tides Foundation, which Tides Canada’s founders were inspired by, has received funding from Soros’ charitable foundations, the two organizations are independent.

“Despite repeatedly clarifying that we are an independent registered Canadian national charity and that Tides US and Tides Canada are distinct organizations, with no legal or governance ties, this false depiction continues to be shared,” said Murphy. “When Tides Canada was founded in 2000, its founders were inspired by the Tides US foundation model, hence the name.”

Warmington’s tweet, nevertheless, was shared on several QAnon forums and Telegram groups, the Daily Beast confirmed, where baseless conspiracies that the election was rigged for Biden are widespread.

It also drew the attention of the far-right Rebel News, a Canadian outlet that doubles as the country’s equivalent of Breitbart and InfoWars, mixing incendiary commentary with unreliable reporting.

Rebel sent their own correspondent, Keean Bexte, to the office where Dominion is located on Tuesday.

Bexte—who previously worked for a white supremacist military surplus webstore that sold Rhodesian and apartheid South African flags—managed to produce a quixotic, ten-minute long segment that could double as a parody of far-right YouTube videos.

In his, video Bexte presses a microphone towards people entering the building, tracks down a building manager who asks him to leave, and wonders whether “the radical employees of George Soros [are] able to access the same desks, filing cabinets, servers, and Wi-Fi of Dominion Voting.”

The whole time he appears ignorant of the fact that the alleged “Soros group” left the multi-tenanted building in November 2019. Stock video of animated servers appear at one point, adding a Tim & Eric aesthetic.

On Wednesday, the Rebel appended the page where it hosts the video to note Tides Canada “moved out of the office building at 215 Spadina Ave. last year, although their name remains in the building door-entry system and on the building’s directory of tenants.”

That didn’t stop Bexte and Warmington from congratulating one another on Thursday, when Powell relayed her allegations at a press conference full of dozens of other false and misleading claims.

"Sidney Powell just referred to my viral story about Dominion sharing an office floor with George Soros' orgs," wrote Bexte on Twitter, adding a "shoutout" to Warmington for "being on the story first."

“Great work Keean,” replied Warmington. “You did the heavy lifting.” (He has since deleted this tweet).

Warmington’s Trump cheerleading does not mark the first time he’s gotten behind a politician with a dubious relationship to the truth. He frequently defended Rob Ford, who repeatedly lied about his crack-cocaine use, from charges made by other outlets.

Ford, who died in 2016, is also the politician whose habit for telling falsehoods prepped CNN fact-checking prodigy Daniel Dale for his coverage of Trump’s lying. Dale covered Ford for the Toronto Star, a Sun rival that aggressively challenged Ford’s administration.

This is also not the first time Warmington has had kind words for someone affiliated with white nationalism. He called the far-right media personality Faith Goldy, a one-time Rebel correspondent, a “good kid” after she appeared in a podcast on the neo-Nazi website The Daily Stormer.

Meanwhile, Dominion says its employees have been the subject of death threats as a result of false conspiracies circulating about the company.

Warmington and a spokesperson for Postmedia, the parent company of the Toronto Sun, did not reply to a request for comment.