Michigan GOP Leaders After White House Meeting: 'We Will Follow The Law' 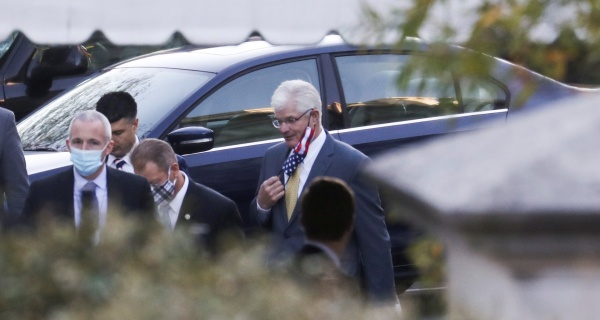 Michigan’s top two legislative leaders vowed that the presidential candidate with the most votes will win the state's electoral votes after departing a Friday meeting with President Donald Trump at the White House.

With the eyes of the nation on them and criticisms flying from Democrats, seven Michigan lawmakers traveled to meet with Trump for about an hour. The visit came as supporters of the president have moved in recent days to overturn the results of the state's election, which Democratic President-elect Joe Biden won by more than 154,000 votes in unofficial returns.

"We have not yet been made aware of any information that would change the outcome of the election in Michigan and, as legislative leaders, we will follow the law and follow the normal process regarding Michigan’s electors, just as we have said throughout this election," House Speaker Lee Chatfield and Senate Majority Leader Mike Shirkey said after the meeting.

In a joint statement, Chatfield, R-Levering, and Shirkey, R-Clarklake, said they highlighted during the meeting their commitment to seeing "further federal dollars" appropriated for Michigan as the state deals with the COVID-19 pandemic.

In the statement, they also said fraudulent behavior in the election should be taken seriously and the candidates "who win the most votes win elections and Michigan's electoral votes."

"These are simple truths that should provide confidence in our elections," they added.

Seven Michigan GOP lawmakers arrived at the White House just before 4 p.m. They were inside for about an hour and 45 minutes. They left after 5:30 p.m. laughing and in good spirits.

But Bob Bauer, a legal adviser for President-elect Joe Biden's campaign, blasted the meeting between the president and the Republican leaders of the Michigan House and Senate as the state prepares to certify its election results as early as Monday.

"It's an abuse of office," Bauer told reporters earlier Friday. "It's an open attempt to intimidate election officials. It's absolutely appalling."

Bauer said Friday morning that it's "not possible" for the Republican-controlled Michigan Legislature to redirect the state's electoral votes to President Donald Trump.

Chatfield and Shirkey were joined at the White House by Reps. Jason Wentworth, R-Farwell, and Jim Lilly, R-Park Township; as well as Sens. Tom Barrett, R-Charlotte; Dan Lauwers, R-Brockway Township; and Aric Nesbitt, R-Lawton. Wentworth will be the speaker of the House in 2021 when Chatfield departs because of term limits.

Despite criticism from Democrats, Chatfield welcomed the opportunity to meet with Trump.

"No matter the party, when you have an opportunity to meet with the President of the United States, of course, you take it," the House speaker tweeted Friday. "I won’t apologize for that. In fact, I’m honored to speak with POTUS and proud to meet with him. And I look forward to our conversation."

Chatfield and Shirkey added afterward that they used their time to deliver a letter to Trump "making clear our support for additional federal funds to help Michigan in the fight against COVID-19." Democratic Gov. Gretchen Whitmer similarly has been advocating for more federal COVID-19 aid as she supports the Democratic-led U.S. House's $2.2 trillion package.

White House spokesman Brian Morgenstern told reporters the event was an opportunity for the president to meet with legislators.

"I believe these are Republican legislators who are fans of the president, admire the president. They’ve spoken to this," Morgenstern said. "I think they issued some statements that they are excited to meet him and share ideas and thoughts. I don’t have any more specifics about that at this time."

Bauer served as White House counsel under former President Barack Obama. The former vice president won Michigan 51%-48% or by 154,000 votes on Nov. 3, according to results that have been certified by all 83 counties.

However, Trump's campaign is claiming that there are enough "illegitimate ballots" in the state to swing the results, but the campaign hasn't provided evidence that would suggest the type of widespread fraud it's alleging. And a Wayne County judge has labeled the campaign's claims "not credible."

The Board of State Canvassers, which features two Republicans and two Democrats, is scheduled to meet Monday to discuss the certified county results and possibly vote on certifying the statewide election results, a key procedural step.

Republican U.S. Senate candidate John James asked the state board not to certify the statewide election results and take two more weeks or until Dec. 7 to audit the results. Democratic U.S. Sen. Gary Peters defeated James 50%-48% or by more than 92,000 votes under the unofficial certified votes from Michigan's 83 counties.

“I submit this request because I am interested in the truth and protecting the integrity of our elections,” James said in a statement to the board. “Sometimes the truth takes time to surface, and it’s rarely easy to get to. Time is the most valuable asset we have at this stage and I ask that we take all the time reasonable and allowed — not to undermine our elections — but to improve them and boost public confidence in the results of the election.”

Federal law gives the states until Dec. 8, known as the "safe harbor" day, to certify their results.

Asked if the president would ask the Michigan Republican leaders to appoint pro-Trump electors, White House Press Secretary Kayleigh McEnany said Friday it is “not an advocacy meeting.”

“There will be no one from the campaign there. He routinely meets with lawmakers from all across the country,” McEnany said at a briefing.

Asked at what point Trump will concede, she pointed to ongoing litigation and that there are “very real claims out there,” referencing affidavits filed by GOP observers in Wayne County.

“Two individuals on the canvassing board there that have declined to certify” the results, McEnany said. “These are real claims these individuals deserve to be heard on a system that's never been tried in American history -- mass mail-out voting.”

The two Republican canvassers voted to certify Wayne County's results after initially declining to do so. They demanded an audit of out-of-balance absentee counting boards as a condition of their certification vote.

Secretary of State Jocelyn Benson has said she will conduct an audit of certain Wayne County votes after the statewide certification of votes, which is required by law.

The president will not be successful in attempts to change the election's results, Bauer said.

"The popular vote governs," he said of Michigan. "That was the system in place on Nov. 3 and that is the system that is going to produce the slate of Biden-Harris electors."

Trying to change the fact is "not possible" and "not legal," Bauer said. It "cannot happen," he added. Likewise, Bauer said any attempt to delay the certification of Michigan's votes would ultimately not be successful.

"State law provides deadlines for votes to be certified and those deadlines are enforceable," he said.

The deadlines fall before Dec. 14, when the Electoral College meets.

“The attempt to delay may be undertaken but it won't be successful," Bauer said.

Norm Shinkle, a Republican member of the Board of State Canvassers, has said he anticipates making a motion next week for some kind of audit of the Nov. 3 election.

“We’ve got to dig deeper on the core issues here,” Shinkle said. “We have to have an audit. The question is: How do you define that?

“I’m very much inclined to find out what happened for the sake of future elections in Michigan."

U.S. Rep. Fred Upton, who was the first House Republican to congratulate Biden on winning the election, criticized the effort to overturn Michigan’s vote.

“I've not seen any evidence of fraud that would overturn 150,000 votes,” Upton told reporters Friday outside the U.S. Capitol.

Upton said he hadn’t spoken to any of the Michigan legislative leaders coming to Washington to meet with Trump at the White House.

The St. Joseph Republican also noted that the Michigan Legislature doesn’t have the votes to override Democratic Gov. Gretchen Whitmer if it were to try to change the rules regarding the appointment of electors.

“As far as I know, the governor would have to sign that too. They don't have the votes to override her. That's just a dead end,” Upton said.

He also cast doubt on the possibility the dispute over the election would end up in the U.S. House for lawmakers to decide.

“I think that's pretty much a long shot. I don't expect that to happen. I'm not a lawyer but I don't see judges overturning a certified election. Georgia is doing theirs today and they actually went back and hand-counted,” Upton said. “Again, no one has shown any evidence that would overturn the margin.”

In a separate Friday Michigan Democratic Party press conference, Rep. Debbie Dingell of Dearborn said Shirkey and Chatfield's meeting with the president is "totally inappropriate" and a move that "deeply, deeply concerns" her.

"When the president of the United States calls, most times, no matter who you are, you respond. But you don't respond when he's about to use you as a prop. Or worse yet, try to bribe you," Dingell said. "By accepting this meeting, the speaker and the majority leader are helping him undermine the will of the voters."

She also called on the Board of State Canvassers to certify the election results when they meet Monday, saying "there is no legal basis in fact" for them not to do so.