Rudy Giuliani Reportedly Wants $20,000 A Day To Get Laughed out Of Court On Trump's Behalf 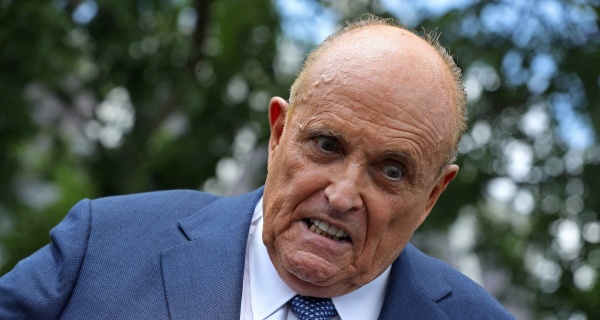 This will presumably be the final nail in Trump’s 2020 election coffin.

Last week, Donald Trump suffered an embarrassing setback in his already embarrassing attempt to overturn the results of the 2020 election, when the law firm leading the legal effort to challenge the results in Pennsylvania withdrew from a suit it had filed on behalf of the campaign, followed by a similar move by another firm in Arizona, followed by a third law firm saying it wouldn’t get involved in any further litigation concerning the election. Obviously, few people want to come near this ridiculous charade with a 200-foot pole for fear of it damaging their reputation. But you know who does not have a reputation that needs protecting, because it’s not actually possible for it to get any worse? That’s right, one Rudy Giuliani.

On Tuesday the former mayor turned disgraced lawyer jumped in to try Trump’s case in Pennsylvania, arguing that the campaign had been blocked from the ballot-watching process in key cities and claiming that Democrats could have plotted to commit election fraud by counting absentee ballots, arguments that have been rejected by judges on numerous occasions. “If this is allowed without serious sanctions, this will become an epidemic,” Giuliani told Judge Matthew Brann, in his first federal case since 1992. “It just all happened to be in big cities controlled by Democrats who all of a sudden decided you don't have the right to inspect an absentee ballot,” he said, adding “You’d have to be a fool to think this was an accident,” his eyes presumably characteristically bulging for emphasis. In response, Mark Aronchick, a lawyer for several Pennsylvania county election boards, accused Giuliani of living in a “fantasy world,” calling his arguments “disgraceful,” and calling for the judge to dismiss the case. And based on the Trump team’s track record, there’s a good chance it will be!

The Pennsylvania case is just one of a number of similar cases filed by the campaign and Trump allies in several battleground states in an effort to reverse [Joe] Biden’s win. Those cases to date have failed to convince judges, and failed to produce evidence of fraud to such a degree that could overturn Biden’s victory in a single state, much less the several states that Trump would need to flip to win a second term.

While Giuliani has been trying to prove voter fraud on Trump’s behalf since Biden was declared the winner on November 7, holding a press conference that afternoon at Four Seasons Total Landscaping, where he had a convicted sex offender offer alleged evidence of ballot-counting funny business, it was only on Saturday that Trump officially announced that the former mayor would be spearheading “the legal effort to defend OUR RIGHT to FREE and FAIR ELECTIONS.” A job for which Giuliani, late of appearing in a Sacha Baron Cohen movie with his hands down his pants, would apparently like $20,000 a day, according to the New York Times.

Reached by phone, Giuliani insisted to the Times that he never requested that much money, saying, “The arrangement is, we’ll work it out at the end” and adding that whoever said he asked for $20,000 a day “is a liar, a complete liar.”