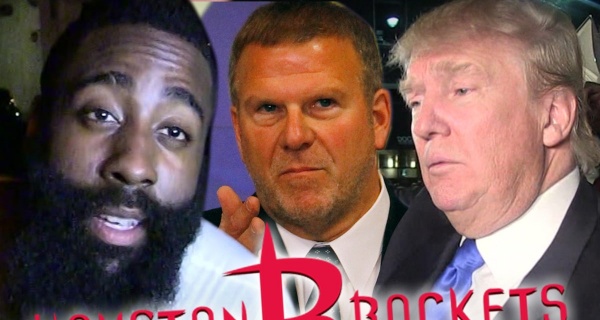 The rumors that James Harden and Russell Westbrook want the Houston Rockets to trade them appear to be over their desire to win now. With a new GM and head coach, it could feel like they’re starting all over again, and that’s not what they signed up for.

That narrative makes sense, but it may not be the real reason. According to a new report, Harden, Westbrook, and others are revolting against Rockets owner Tilman Fertitta’s political leanings.

On “The Odd Couple” podcast with Chris Broussard and Rob Parker, NBA reporter and radio host Ric Bucher said that Rockets owner Tilman Fertitta’s support of Donald Trump has led to a “revolt” among players. That’s reportedly why Harden and Westbrook have both requested trades, and apparently a number of other Rockets players are also deeply unhappy.

“I immediately thought this was Daryl Morey leaving, and Mike D’Antoni leaving, and Russell Westbrook and James Harden going ‘no offense to Stephen Silas or Rafael Stone, but we don’t want a starter kit, we’re playing for a championship.' No matter how much you regard Stephen Silas or Stone, these guys are brand new at the job, and what’s our expectation that they’re going to be able to make the moves necessary for us to leapfrog the Lakers. But what I heard is — and we know how much politics and political position had to do with the boycott and protests during the Bubble — I’m hearing that Tilman Fertitta’s strong Republican support and donations is one of the things that is contributing to this dissatisfaction, and those two [Westbrook and Harden] are not the only ones to want out of Houston. Lesser players are of the same mind. There is a revolt here because they look at Fertitta as a guy who supports the current President.”

If money talks, Fertitta’s is saying a lot. But in a late August interview, Fertitta pushed back against Trump’s comments that it’s “not a good thing” that the NBA is a “political organization.”

In the same interview, which took place after the murder of George Floyd and during the NBA walkout, Fertitta also publicly supported his players’ decision to stand together and walk out of the playoffs.

However, Fertitta also said he didn’t see the players’ walkout as a statement on anything. He blamed it on players being cooped up in the bubble, saying that they just needed “a pause” to handle stressful conditions. Numerous players have said that was absolutely not the case, and that the walkout was protesting the continued police brutality against Black people.