Trump Reveals His 'Truly Great' Legal Team: A Conspiracy Theorist Accused Of Antisemitism And His Wife, A Lawyer Who Retweets QAnon And A Campaign Legal Adviser Who Says Gays Are 'Sinners'... All Led By Rudy Giuliani 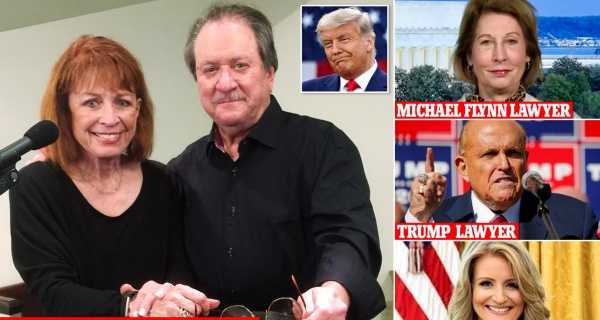 *Rudy Giuliani, his personal lawyer, will head the legal fight on Trump's behalf

*The final member of the team is Jenna Ellis, Trump campaign legal advisor

Donald Trump on Saturday night announced the five lawyers who would form his 'truly great team' and contest the results of the election.

The day after a series of damaging defeats in Pennsylvania, Arizona, and Michigan, Trump announced the appointment of five people to take on his floundering legal strategy.

Among them were a husband and wife duo famed for appearing on Fox News to promote Ukraine conspiracy theories, a lawyer who represented disgraced former National Security Adviser Michael Flynn, and an evangelical who says that she believes law is her 'ministry'.

'I look forward to Mayor Giuliani spearheading the legal effort to defend OUR RIGHT to FREE and FAIR ELECTIONS!' Trump tweeted.

The legal team was previously led by David Bossie, a businessman who is not a lawyer. He tested positive for COVID-19 earlier in the week, as did another member of the legal team, Corey Lewandowski.

Giuliani, 76, has been drafted in to replace Bossie and his involvement has already 'vexed' some within the White House, The New York Times reported.

His infamous press conference at the Four Seasons Total Landscaping in Philadelphia on November 7, held at the moment Joe Biden was declared the projected winner of the election, sparked much mockery for the team.

Furthermore, the former mayor of New York alienates many with his abrasive, uncompromising position - something prized by Trump.

Alongside Giuliani are two close friends of his: Joseph diGenova, 75, and his wife Victoria Toensing, 79.

They have been in Trump's orbit from an early stage, helping Giuliani with some of the law and order platforms on the 2016 campaign.

The pair, a fixture of Fox News, informally advise Trump and are known to have helped Giuliani as he sought dirt on the president's political rivals.

They were almost hired by the president in March 2018, to represent him personally in the Mueller investigation.

John Dowd, a prominent Washington white-collar defense attorney who was serving as Trump's lawyer, resigned on hearing of plans to include them in their team.

Politico reported that White House aides were alarmed by the pair's fondness for conspiracy theories.

Philip Lacovara, a former counsel for the Watergate prosecution team and a former law partner of Toensing who has known the couple for 30 years, said they had become increasingly outlandish in their ideas.

He told Politico that diGenova, in particular, 'used to be more mainstream, but the ensuing decades [has shown] a bizarre tendency to spot demonic conspirators lurking behind every bush'.

DiGenova also found himself confronting accusations of anti-Semitism after appearing on Fox News to accuse George Soros of controlling a 'very large' part of the State Department, as well as running unspecified FBI agents.

Jonathan Greenblatt of the Anti-Defamation League accused DiGenova of 'trafficking in some of the worst anti-Semitic tropes', while Patrick Gaspard, president of Soros' Open Society Foundations, described it as 'McCarthyite'.

In a letter to Fox News chief executive, obtained by the Washington Post, he wrote: 'This is beyond rhetorical ugliness, beyond fiction, beyond ludicrous.'

He requested an on-air retraction and the banning of diGenova from the TV network.

She also represents John Solomon, a former journalist at The Hill who helped Giuliani push his allegations against Hunter Biden, Joe's businessman son.

Solomon parted ways with Fox News this week. In February the network's own research desk accused him, according to the Daily Beast, of playing an 'indispensable role' in a Ukrainian 'disinformation campaign.'

The fourth member of the team is Sidney Powell, a lawyer who began her career as the youngest US attorney in the country.

She spent 10 years as an Assistant US Attorney before setting up a private practice in Dallas, Texas.

In recent years she has turned her hand to books, writing in 2014 Licensed to Lie: Exposing Corruption in the Department of Justice, which set out to lift the lid on the 'deep state'.

In June 2019 she took over the case of Michael Flynn, Trump's short-lived National Security Advisor who has sought to withdraw his guilty plea to lying to the FBI about his contact with Russians.

She believes Mueller was part of a 'deep state' conspiracy from former Obama officials to bring down Trump: on her website, she sold t-shirts with the faces of Mueller, James Comey, and some of Mueller's team with the slogan 'Creeps On A Mission'.

Powell has also repeatedly retweeted major accounts that promote the QAnon conspiracy theories, according to Media Matters, and shared articles from Alex Jones' conspiracy theory website, Infowars. She told Politico that she had no idea what QAnon was.

Like DiGenova, she has something of a fixation with Soros, repeatedly tweeting about him and accusing of participating in a plot to bring down Trump.

She has also tweeted that '#Islam is only 'religion' of which I am aware that seeks to destroy others & would disenfranchise > 1/2 world population.'

Asked by Politico in January if she was a conspiracy theorist, she laughed and said: 'I think it's hilarious.'

The final member of the legal team is Jenna Ellis, a deeply religious lawyer now serving as legal advisor to the Trump campaign, a role she has held for the past year.

Several decades younger than the others, she describes herself as having 'endeavored to contribute to the biblical worldview of law'.

She spent a year as a deputy district attorney in Colorado before moving into teaching and moving into private practice in 2013.

Ellis has become a particularly despised figure among LGBTQ activists, who highlighted her 2016 Facebook post in which she wrote of homosexuals: 'These sinners need our prayers also, and while their conduct is vile and abominable, certainly we cannot forget that they are human beings, made in the image of God. Unlike gorillas.'

On Friday night Ellis appeared on Bill Maher´s show for a contentious interview, in which the host told her: 'Your lawsuits are being laughed out of court.'

Maher asked her: 'Aren't you a little bit ashamed of how you're denigrating the people who worked so hard in the most difficult election in memory? They worked so hard to make this come out right.'

She replied: 'You know, that's an unfair question.

'If they were working really hard for this, then they would want to make sure that their states are certifying an accurate count.'

The odds are increasingly against Trump's legal team.

In Arizona, on Friday they withdrew their case, accepting that the margin for Biden was so large there was no point trying to challenge it.

In Pennsylvania, a Philadelphia court rejected five legal challenges by the Trump campaign and Republicans alleging irregularities for mail-in ballots.

The five separate petitions challenged more than 8,300 votes in Philadelphia, alleging irregularities because voters did not print their names under their signature or print their address on their mail-in ballots' outer envelope.

The Court of Common Pleas in Philadelphia rejected each of the challenges.

A law firm representing the Trump campaign in the state had announced on Friday it has withdrawn from the case.

Its expansive case called into question millions of votes cast by Pennsylvania residents who voted by mail in accordance with state law.

The firm was facing a backlash for its legal work, was facing public pressure from the Lincoln Project, a group of Republicans that worked to defeat Trump, for seeking to 'overturn the will of the American people.'

And in Michigan, a judge denied the Trump campaign's request to stop the canvassing of ballots in Wayne County, which includes Detroit.

'No formal challenges were filed. However, sinister, fraudulent motives were ascribed to the process and the city of Detroit," Kenny wrote in an opinion released Friday.

'Plaintiff's interpretation of events is incorrect and not credible,' he wrote, the Detroit News reported.

The legal team is likely to be focused on Georgia, where only 14,000 votes representing 0.3 percent of the electorate separate a victorious Biden from Trump.

The likelihood of overturning the result is extremely slim. And, regardless, Biden's electoral college lead is such that he does not need Georgia to win.