Charles Koch Says He Regrets Fueling Partisanship: 'Boy, Did We Screw Up!' 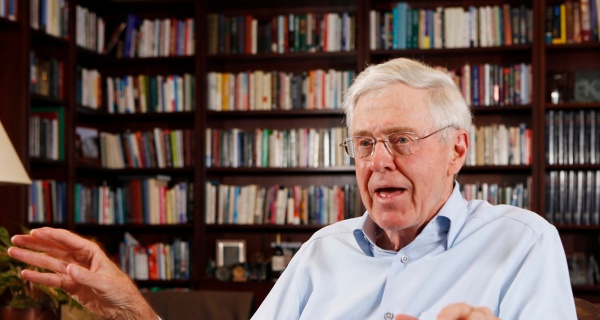 *He told The Journal that his new mission is to work across party lines on issues he sees as key, citing the economy, criminal justice, and immigration as examples.

*The Journal reported that in a new book, Koch wrote: "Boy, did we screw up! What a mess!"

*Koch and his brother David, who died last year, helped fund the rise of the tea party, which pushed the Republican Party significantly to the right over the past decade.

The billionaire Charles Koch, who has funneled millions into the GOP and conservative movements, reportedly expressed misgivings over how that money had fueled excessive partisanship.

In an interview with The Wall Street Journal's Douglas Belkin published Friday, Koch spoke about his new mission of unification across partisan lines.

He also shared with The Journal parts of his new book, "Believe in People: Bottom-Up Solutions for a Top-Down World," in which he said he regretted his partisanship and the divisions it fostered.

"Boy, did we screw up!" he wrote, according to The Journal. "What a mess!"

Koch and his brother David, who died last year, were major players in the rise and shaping of the tea party. The brothers founded the conservative organization Americans for Prosperity in 2004.

In her 2015 book "Dark Money," the New Yorker writer Jane Mayer tracked how they used their fortunes to amass political influence and further a libertarian agenda.

"We did not create the tea party. We shared their concern about unsustainable government spending, and we supported some tea-party groups on that issue," Koch wrote in an email to Belkin. "But it seems to me the tea party was largely unsuccessful long-term, given that we're coming off a Republican administration with the largest government spending in history."

Koch did not immediately respond to Insider's request for comment.

Koch is worth $44.9 billion, according to Forbes. His fortune comes from Koch Industries, which his father began as a refinery business, making the Kochs into power players in the fossil-fuel industry. The brothers repeatedly opposed efforts to fight climate change.

Koch Industries' PAC and employees gave $2.8 million to Republican candidates in the 2020 cycle and $221,000 to Democratic candidates, according to The Journal.

In an email to Belkin, Koch congratulated President-elect Joe Biden and Vice President-elect Kamala Harris on their victory, saying he looked forward to "finding ways to work with them to break down the barriers holding people back." He cited the economy, criminal justice, and immigration as examples of key issues.

"At the same time," Koch wrote, "I hope we all use this post-election period to find a better way forward. Because of partisanship, we've come to expect too much of politics and too little of ourselves and one another."