Shocked by Trump’s Loss, QAnon Struggles to Keep the Faith 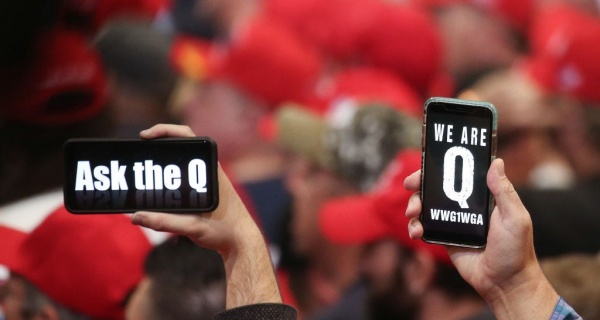 For years, followers of the pro-Trump conspiracy theory had been assured that the president would win re-election in a landslide.

Last weekend, as jubilant Democrats danced in the streets to celebrate the election of Joseph R. Biden Jr. as the country’s 46th president, QAnon believers were on their computers trying to make sense of it all.

“Biden will NEVER be president,” wrote one QAnon believer, still firmly stuck in the denial stage of grief.

“Trump knows what he is doing,” wrote a member of a QAnon forum, well on his way to bargaining. “He is letting the Dems, technocrats, and media publicly hang themselves.”

Some QAnon believers, however, were already inching toward acceptance.

“We’re losing,” one tweeted. “Not sure I trust the plan anymore. Not sure there even is a plan.”

These are trying times for believers in QAnon, the baseless conspiracy theory that falsely claims the existence of a satanic pedophile cult run by top Democrats. For years, they had been assured that Mr. Trump would win re-election in a landslide and spend his second term vanquishing the deep state and bringing the cabal’s leaders to justice. Q, the pseudonymous message board user whose cryptic posts have fueled the movement for more than three years, told them to “trust the plan.”

But since Mr. Trump’s defeat, Q has gone dark. No posts from the account bearing Q’s tripcode, or digital user name, have appeared on 8kun, the website where all of Q’s posts appear. And overall QAnon-related activity on the site has slowed to a trickle. (On a recent day, there were fewer new posts on one of 8kun’s QAnon boards than on its board for adult-diaper fetishists.)

There are also signs of infighting among QAnon’s inner circle. Ron Watkins, an 8kun administrator who some believed was Q himself, announced on Election Day that he was stepping down from the site, citing “extensive battles” over censorship and the site’s future. His father, Jim Watkins, a professed QAnon believer who owns 8kun, has been singing hymns on his livestream and posting debunked claims about voter fraud, but has not given any indication of when Q might return.

Q’s sudden disappearance has been jarring for QAnon believers, who have come to depend on the account’s posts, or “drops,” for updates and reassurance.

“They feel really defeated by the deep state, even if they’re not admitting it in public,” said Fredrick Brennan, the founder of 8chan, 8kun’s predecessor site. Mr. Brennan, who has left the site and become a vocal critic of Mr. Watkins, said QAnon believers had bought into the idea that Mr. Trump was fully in control, even as the polls showed he had a slim chance of winning.

Over the last few months, QAnon followers have been barred from most major social media platforms, deflating the movement’s momentum and depriving it of its most effective organizing tools. Large Facebook groups and YouTube channels with hundreds of thousands of subscribers disappeared overnight, and some of QAnon’s most prominent promoters have been reduced to peddling conspiracy theories on fringe websites.

The crackdowns have hurt QAnon’s grifter class — the self-appointed leaders who make a living selling Q merchandise, writing QAnon-themed books and organizing offline Q events. But they also disconnected rank-and-file believers from the communities where they gathered to discuss the news, decode the latest drops and plan for the future.

“QAnon believers were hoping for direction if Trump lost, and not only are they unable to hook into Q, there have also been moves by platform companies to remove other sources of entertainment and leadership,” said Joan Donovan, the research director of Harvard’s Shorenstein Center.

Election Day was not a total loss for QAnon. Marjorie Taylor Greene and Lauren Boebert, two Republicans who have praised the conspiracy theory, won their House elections and will be sworn in next year.

But Mr. Trump, the central heroic figure in QAnon’s fantasy, will not. And without an enabler in the White House, it remains to be seen whether the movement’s days are numbered.

“QAnon believers are used to having Q’s predictions not come true,” said William Partin, a research analyst at the nonprofit Data & Society who has studied the QAnon movement. “Sometimes people get disappointed and quit. Others try to adjust the overall narrative to make the setback part of some larger plan. But it’s very difficult to do that kind of adjustment with something as large as losing the presidential election.”

Some QAnon watchers I spoke with speculated that during a Biden presidency, some of the movement’s most prominent influencers would quietly peel off into adjacent conspiracy theory communities — stirring up fears about child sex trafficking as part of the Save Our Children movement, for example, or sowing distrust in a Covid-19 vaccine.

QAnon supporters also could throw themselves behind more mainstream conservative efforts to dispute the election’s results. Already, some QAnon influencers have been promoting Stop the Steal rallies in states where Mr. Trump and his supporters have made baseless claims of voter fraud.

In some ways, QAnon believers are well-positioned to help Mr. Trump recast himself as the victim of a Democratic coup. They are experienced and savvy content generators, with an appetite for far-fetched conspiracy theories and delayed gratification. They are also part of a hyperpartisan audience accustomed to questioning official narratives. A Morning Consult survey conducted over the weekend found that seven out of 10 Republicans now doubt that the 2020 election was “free and fair.”

Some QAnon believers are already latching on to a bogus conspiracy theory known as Operation Hammer and Scorecard, which falsely claims that a supercomputer and a software program were used to change tabulated vote totals. (Christopher C. Krebs, the director of the Department of Homeland Security’s cybersecurity agency, called the theory “nonsense” and urged people not to fall for it.) Others have begun spinning a convoluted fantasy that Mr. Trump secretly placed invisible watermarks on ballots in order to entrap Democrats in a voter fraud scheme.

None of the experts predicted that QAnon would disappear, or said those seduced by the theory would magically snap out of it. In some ways, they said, the movement has outgrown its founding myths.

“QAnon is about cultivating this way of knowing, by tying together all these stories and posts and creating a compelling narrative that offers an alternative to the mainstream press,” Mr. Partin said. “That will persist, whether or not Q is posting.”

So far, no plan has emerged for what QAnon believers will do when Mr. Trump’s presidency does, in fact, come to an end, especially if Q is no longer there to steer them to a new theory.

On a podcast on Friday, two prominent QAnon influencers, known by their online handles InTheMatrixxx and Shady Groove, urged their fellow believers not to give up hope. The election will be proven fraudulent, they agreed, and Q’s prediction of a Trump victory will look even more prescient in hindsight.

“This is not what you thought winning would look like,” he said. “But trust me.”