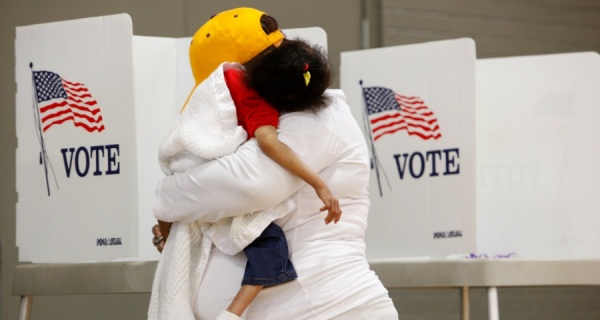 On Election Day 2016, I proudly took my two-year-old (almost-three-year-old) daughter to the polls. Elder ladies smiled twinkly smiles at her. Her hair was still toddler short, a crown of Shirley Temple ringlets. We took a picture outside the polling place, our local church, where rainbow and Black Lives Matter flags flapped overhead. I believed she’d grow up never questioning that a woman could be president, the way I still do now at 38.

That night, I took a taxi as far as security would allow and walked the rest of the way to the Javits Center to cover Hillary Clinton’s would-be victory party beneath a massive glass ceiling for Vogue. I wore flats, a blazer, and a “I suppose I could have stayed home and baked cookies and had teas” T-shirt, choosing comfort over the pantsuits and heels bustling around me. I was seven months pregnant with a boy, and I felt equally excited for him to be born under a female, Democratic president (the inevitable Nikki Haley run will mean nothing to me); to eventually see a world not dominated by men who look like him.

As the electoral map mounted on an enormous TV screen turned red, maternal fear began rising. “I worry for my children,” one woman at the Javits Center told me. “I worry for the grandchildren I don’t have yet.” Costume designer June Ambrose said: “My 12-year-old just called me and said, ‘Will I wake up to the boogeyman being president?’”

When I opened my own eyes and instinctually cried the next morning, it was not just pregnancy hormones but the fear of raising both of my kids in a country that would elect a man who represented the opposite of the values I’m supposed to teach them: kindness, understanding, decency. I cried from a place beyond me, thinking about my little girl and the misogynist who had won.

That morning both feels like yesterday and seems a million years ago. My daughter is six now and asking endless questions about Election Day. “When the next president is done [with his first term],” she recently exclaimed, “I’ll be 10!” This statement struck right at my heart: Four years is a blip to some people, but it is a lifetime for a child and their parents. The son I carried on Election Night 2016 is almost four, a little person in preschool learning to use kind words, keep his hands to himself, and wear a tiny mask for six hours straight. In all of this, he’s already leaps and bounds ahead of the commander in chief.

Parenting has been precarious, a sickening emotional roller coaster, these past four years. At its most vile, the Trump administration had torn families apart, ostensibly orphaning 545 children at the U.S.-Mexican border; deporting parents back to countries they do not know via ICE raids; keeping them continents away from each other through the Muslim ban. The most privileged among us merely have to hear his toxic rhetoric, his bullying and racism, not have our everyday lives upended by it. But explaining it to kids is an endlessly moving target.

If the president’s behavior is not okay, then why—because kids always ask why—does he get to be president? “I get so tangled up in explaining how and why he’s a bad man but also that we respect the office and the rule of law,” a mom friend told me. Her kids have started chanting “dump Trump into the dump,” which makes her proud but also conflicted, she adds: “You guys know this is not okay to say about almost anyone else?”

How much rage and upset is appropriate to share (sometimes it’s simply unavoidable) and how much to conceal? And if you try to mute this unavoidable man, will your kids only end up hearing an unfiltered version of his latest attack from friends at school? Even among six-year-olds, the news of presidential coronavirus diagnoses travels fast. I’m not inclined to shelter my daughter: I took her marching down our street for the second Women’s March, chanting in unison: “He’s not my president!” But no matter how astute and observant she may be, I also don’t want to scare her or prematurely convey the sad truth that some bad guys are real.

Nor do I want Trumpian toxicity to change who we are. More than this or any president, our kids are watching us for cues on how to be a good person. But I admit that after four soul-crushing years, I have often been filled with anger and resentment, and my children unwittingly humble me. When Trump got the coronavirus, for example, and there was some “I told you so” chatter and black humor in the ether, I swallowed my own ire and kneeled down to explain to my wide-eyed daughter, “I don’t want him to be president anymore, but we don’t hate anyone,” I said. “We’ll wish him well...at his new home in Florida.”

If early reports and polling about suburban white women, many of them mothers, turn out to be true, some of the same women who helped Trump to victory may now deny him a second term. Raising children in this climate becomes, quite simply, untenable. “I want the president to be on TV and my kids to be able to be in the room,” one told the New York Times.

As dark and deplorable as it has been, the Trump administration has given me the chance to show my children, from a very early age, some of the things I most want them to know: that it is our duty to stand up for what we know to be right, to loudly call out injustice, and to use our privilege to advocate for others who do not share it. Over the summer, my daughter and I colored in a big Black Lives Matter sign in rainbow colors, then gathered with our family, our dear friends, and a crowd of hundreds at the Black Lives Matter Children’s March in our neighborhood. The little voices chanted the loudest.