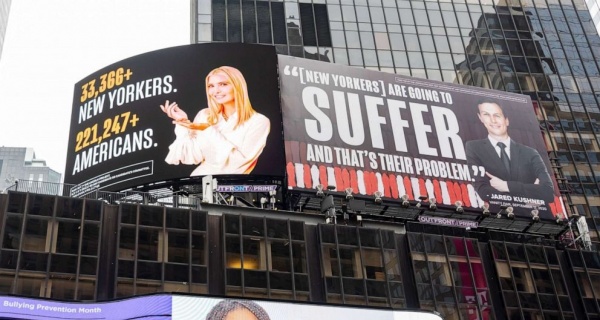 Pick your battles is a good piece of advice generally, and apparently nobody ever suggested it to Jared Kushner or Ivanka Trump, because they pulled the tail of the wrong tiger last week. The Lincoln Project put up billboards in Times Square, depicting the callous indifference of the Entitlement Twins to coronavirus deaths, and they in turn lashed out via their disgraced *lawyer* Marc Kasowitz. Kasowitz threatened to sue for “enormous” damages, when he knows he doesn’t have a legal leg to stand on, and so the battle began. The latest escalation has been to put the same billboards on a Mar-a-Lago bound boat and trucks circling Trump tower. And here’s what Steve Schmidt chimed in, while that was going on. This is the transcript of his Twitter thread.

The First Amendment to the Constitution of the United States of America reads: Congress shall make no law respecting the establishment of a religion, or prohibiting the free exercise thereof; or abridging the freedom of speech or of the press or the right of the people peaceably to assemble, and to petition the Government for a redress of grievances.

WE DO NOT LIVE IN TRUMPISTAN or JAVANKASTAN.

The billboards will remain because they light the night sky as a beacon of accountability and truth. The unqualified child of Trump and her husband were given jobs at the highest level of government and charged with life-and-death responsibilities.

They have engorged themselves for four years like pigs at the public trough. They have abused the taxpayers, flouted ethics and conflict-of-interest guidelines, rules and laws. They have enriched themselves with lucrative deals from foreign countries, while they were perched in the West Wing. They are both important architects and agents of this American catastrophe.

For the hundreds of thousands of dead Americans that should be alive but for the stupidity, incompetence, negligence, malfeasance, and callous indifference of Trump and his regime of fools, to the caged children who may never see their parents again, we will fight.

The Lincoln Project greatly upset Ivanka with its “Find Something New” video. Rick Wilson said that Kushner had contacted the Lincoln Project at that time and was “very upset.” That upset apparently festered and then exploded when the Times Square billboards went up. That sent them to Kasowitz’ office and his specious, hollow threats acted as the proverbial red flag in front of the bull. So here’s the status of the Jarvanka v. Lincoln Project wars as of now.

Jared and Ivanka are outclassed and clueless in this contest — as in every other area of their endeavors — and this is some much needed, third act comic relief. Those two amateurs attempting to bully the top strategists and PR people in the Republican party is truly hilarious. Everybody is getting a good laugh. I’ll bet Mitch McConnell is enjoying this one. He would never admit it, but he’s been around a long time and seen a lot and unless I miss my guess, he has no patience for this ship of fools either. He’ll be happy to see it sail into the sunset. He’s just hoping the damages aren’t going to be that bad.