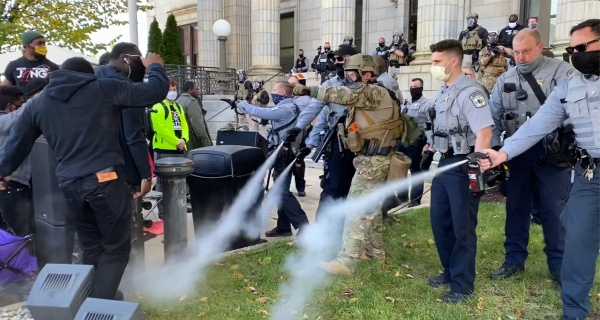 Alamance County sheriff’s deputies and Graham police pepper-sprayed people — including a 5-year-old girl and other children — who were participating in the “I Am Change” march to the polls on Saturday afternoon.

A racially diverse group of about 200 people walked with a police escort from Wayman’s Chapel AME Church to Court Square, where they held a rally encouraging people to vote. The event was organized by Rev. Greg Drumwright, a Burlington native who leads the Citadel Church in Greensboro, according to his website.

At least three politicians participated in some parts of the event: the current mayor of Burlington, Ian Baltutis; Democratic candidate for county commissioner Dreama Caldwell; and Democratic school board candidate Seneca Rodgers.

At one point, the marchers held a moment of silence in the street in honor of George Floyd, the Black man killed while in police custody in Minneapolis earlier this summer.

After the moment of silence concluded, law enforcement told people to clear the road.

Then, deputies and police officers used pepper spray on the crowd and began arresting people. Several children in the crowd were affected by the pepper spray.

Melanie Mitchell said her 5-year-old and 11-year-old daughters were pepper-sprayed just after the moment of silence.

She said Graham police approached the crowd assembled in the street and told them to move onto the sidewalk and soon began spraying pepper spray toward the ground. Mitchell’s 5-year-old took off running, she said. Both kids threw up.

“My 11-year-old was terrified,” Mitchell said. “She doesn’t want to come down to Graham anymore.”

The crowd then moved to the courthouse where speeches were being given. But before the speeches concluded, Alamance County sheriff’s deputies began dismantling the sound system and telling the crowd to disperse.

GEORGE FLOYD’S NIECE WAS TO SPEAK

George Floyd’s niece was slated to speak at the event, but the speeches were disrupted before she got a chance at the microphone.

Veronica Holman said her 3-year-old great-nephew also threw up after being pepper-sprayed. They had been sitting on a brick wall across the street from the courthouse, she said. “They didn’t warn us or anything,” she said. “We were just sitting on the wall.”

Another video posted on social media showed a woman in a motorized wheelchair reacting to pepper spray that was released about 10 feet from her.

At least 12 people were arrested. About 20 police officers and sheriff’s deputies stood guard outside the county jail following the arrests; about 100 marchers gathered on a grass strip outside, with officers stationed on both sides of the crowd.

Drumwright was among those arrested, along with many activists associated with the group People for Change, which has organized frequent demonstrations in Court Square this summer. Also arrested were Caldwell’s campaign manager, and Alamance News reporter Tomas Murawski.

Tom Boney Jr., the publisher of the newspaper, said Murawksi was taking photos on the street when he was arrested.

“When I spoke to him on the street, while he was in police custody, he said they ordered them to move out of the roadway,” Boney said in an interview with the N&O. “He was doing so, while still taking photos, but apparently not fast enough for (the police).”

POLICE DEFEND USE OF PEPPER SPRAY

In a statement released Saturday evening, Graham police said Drumwright and the marchers hadn’t followed proper procedures for holding the event. The department said that it warned the group that it would not be allowed to close the road, said Daniel Sisk, a public information officer for the Graham police.

The department defended its use of pepper spraying, by saying, “[T]he assembly reached a level of conduct that led to the rally being deemed unsafe and unlawful by unified command.”

But many who were marching may not have reached the polls.

Faith Cook was one of the few marchers to make it to the polling place on Elm Street.

“I’ve never experienced anything like that,” Cook told The News & Observer. “Nobody should have to.

“I think it was their intention, from the moment this march was announced, that we don’t get to the polls in numbers.”

Quencelyn Ellison, president of Alamance Alliance 4 Justice who helped organize the march, questioned why the marchers were met with pepper spay.

“Why were we tear-gassed on the day we were going to the polls? Voter intimidation?” Ellison said. “We’ve been out here doing this for several weeks, and we were peaceful. How do we get treated with such a great threat?”

The “I Am Change” march was billed in part as a get-out-the-vote initiative as well as a demonstration against police violence.

“This is a non-partisan march,” Drumwright said earlier this week, according to the Burlington Times-News. “This march is encouraging people to go to the polls and vote for change.”

Scott Huffman, who is challenging Republican Rep. Ted Budd in North Carolina’s 13th District in the U.S. House of Representatives, condemned the actions of law enforcement on Saturday. In the video, he said he was affected by the pepper spray that was deployed.

“They should not be doing this to fellow Americans. Black lives matter,” he said in a video posted on Twitter. “All lives won’t matter until we stop this, and I mean it. I urge my Republican opponent Ted Budd to finally stand up to this white supremacist, stand up to these neo-Nazis, and stand for America, not those people. This is wrong. This is wrong. I’m just watching what’s happening right now and it’s wrong.”

In 2012, the U.S. Department of Justice laid out nine ways in which Alamance County Sheriff Terry Johnson and his deputies violated people’s constitutional rights in the county, through “a pattern or practice of discriminatory policing.”

The DOJ, under the Obama administration, filed a lawsuit over the accusations, but a Republican-appointed federal judge threw out the suit. The DOJ appealed, then agreed to drop its legal threats in exchange for Johnson agreeing to actions including “bias-free policing” training for his deputies.

Johnson since been re-elected sheriff twice, in 2014 and 2018. Both times, no one ran against him.

Alamance and other counties in the Triad region include several key districts that Democrats are trying to flip, in hopes of ending Republicans’ control of the state legislature. Some of the biggest political fundraising in all of North Carolina has occurred in Alamance, a News & Observer analysis found earlier this year.