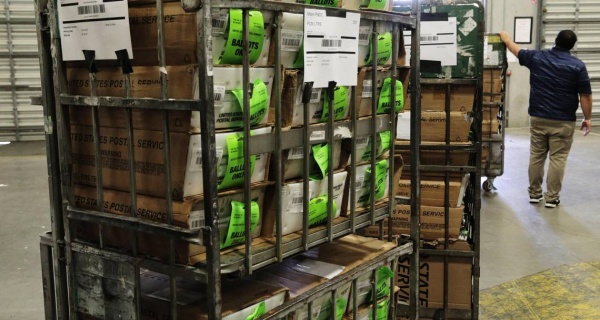 Special agents with the U.S. Postal Service Office of Inspector General discovered 48 pieces of election mail sitting in a post office in South Miami-Dade County on Friday, the office announced Saturday morning. Forty-two of them were ballots that had not yet been delivered to voters, officials said, while the other six had already been filled out and were brought to the Miami-Dade Supervisor of elections Friday night.

The agents “combed through every bit” of mail sitting at the Princeton post office near Homestead on Friday after reports of a backlog of mail piling up at the facility just four days before the Nov. 3 election.

At a press conference outside the Princeton post office Saturday afternoon, McGhee said he had learned that there may be similar issues with undelivered mail at postal facilities in Homestead and Florida City.

Pierce told the Miami Herald that he was not aware of those reports. South Florida-based USPS spokeswoman Debbie Fetterly could not be reached for comment.

McGhee said federal officials had ordered resources be sent to the area to address the situation, but that he had not yet seen evidence of them. He advised anyone who had concerns about their mail-in ballot to instead vote early.

“There is no way this mail will be sorted by Tuesday unless they send armies,” McGhee said.

The last day of early voting is Sunday. The deadline for Florida voters to have requested mail ballots was last Saturday, Oct. 24. Mail ballots must be received by county election officials by 7 p.m. on Election Day in order to count.

Miami-Dade Deputy Elections Supervisor Suzy Trutie said the six completed ballots from the Princeton facility are being processed. Another 24 outbound ballots will be delivered to voters Saturday. The remainder were destined for voters who have already voted early, either in-person or with a replacement mail ballot.

Pierce said an investigation is ongoing and that his office is coordinating with the U.S. Postal Service “to ensure all delayed mail has been properly handled and delivered.” He also said the U.S. Attorney’s Office for the Southern District of Florida “has been briefed on the initial findings.” A spokeswoman for that office couldn’t immediately be reached for comment.

Fetterly, the USPS spokeswoman, did not respond to an inquiry Saturday morning about the agency’s response to the situation. She said Friday afternoon that USPS was looking into the backlog at the Princeton facility.

Officials with USPS and the USPS inspector general’s office have not yet publicly responded to a statement Friday evening by Miami-Dade State Attorney Katherine Fernández Rundle, who called for an audit of every mail distribution center in the county to look for any undelivered ballots.

Earlier Friday, McGhee tweeted a brief, undated video clip purporting to show mail stacked up at the Princeton post office with the caption, “Raw footage of mailroom in post office here in Miami Dade. Source revealed ‘mail in ballots are within these piled up in bins on the floor. Mail has been sitting for over week!’”

The USPS inspector general’s office said they received an allegation of delayed mail at the facility that included a link to McGhee’s tweet.

Mark Travers, the South Florida president for the National Association of Letter Carriers, confirmed to the Miami Herald that the footage in McGhee’s tweet showed the Princeton post office. Travers said he first learned of the backup more than a week ago, on Wednesday, Oct. 21, and that he raised the matter in a call that Friday with other Florida mail officials, who said they would address the issue.

A week later, it appeared the backlog remained, Travers said. He has since been told that additional resources, including more trucks, would be sent to the area, and that carriers would be asked to work to their “contractual maximum” to get the mail out.

He also said officials are now considering delivering mail this Sunday to alleviate the backlog.

“They said they’ll be current by [Saturday],” Travers said. “I’m not sure I believe that.”

Heading into the weekend, the Miami-Dade election department estimates that about 130,000 voters who requested mail-in ballots have not returned them — sharply down from more than 200,000 reported on the department’s website. The big difference, Supervisor of Elections Christina White said, was that about 70,000 people who requested mail-in ballots have canceled them and opted to vote in person at early voting sites.

Out of the approximately 449,000 vote-by-mail voters so far in Miami-Dade, 138,000 went to early voting sites to drop off their ballots rather than post them in the mail, according to election officials.

Over the summer, several factors made it more difficult for the U.S. Postal Service to deliver mail on time. Among them, according to postal workers’ union representatives: staffing shortages due to the COVID-19 pandemic, the removal of mail sorting machines, and policy changes limiting overtime hours.

In multiple lawsuits, federal judges have ordered the USPS to take steps to ensure as many mail ballots as possible are received on time. During a virtual hearing last week in Miami federal court, an attorney said the rate of on-time first-class mail delivery in South Florida was around 83% in early October, down from about 92% earlier in the year.

Local union officials say that, despite some problems, the situation has improved since August amid pressure from the public and the courts.