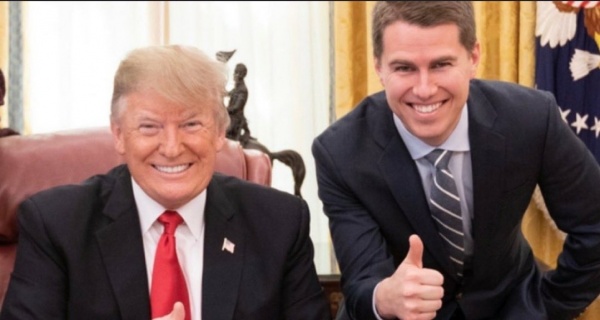 Miles Taylor, the former chief of staff at the Department of Homeland Security, was the anonymous author of The New York Times Op-Ed article in 2018 whose description of President Trump as “impetuous, adversarial, petty and ineffective” roiled Washington and set off a hunt for his identity, Mr. Taylor confirmed Wednesday.

Mr. Taylor was also the anonymous author of “A Warning,” a book he wrote the following year that described the president as an “undisciplined” and “amoral” leader whose abuse of power threatened the foundations of American democracy. He acknowledged that he was the author of both the book and the opinion article in an interview and in a three-page statement he intended to post online.

Mr. Taylor resigned from the Department of Homeland Security in June 2019, and went public with his criticism of Mr. Trump this past summer. He released a video just before the start of the Republican National Convention declaring that the president was unfit for office and endorsed Joseph R. Biden Jr., the Democratic presidential nominee.

But Mr. Taylor, who had repeatedly denied being Anonymous, did not reveal himself to be the author of the opinion article and book at the time. Confronted with Mr. Taylor’s public criticism in August, the president wrote on Twitter that he was a “DISGRUNTLED EMPLOYEE named Miles Taylor, who I do not know (never heard of him).”

The Op-Ed pages of The Times are managed separately from the news department, which was never told of Anonymous’s identity.

Mr. Taylor served for two years as a top aide to Kirstjen Nielsen, Mr. Trump’s third homeland security secretary, and wrote in The Times that he was part of a cadre of officials around Mr. Trump who were quietly working to “frustrate parts of his agenda and his worst inclinations.”

As a senior administration official, Mr. Taylor often interacted with the president at the White House, particularly on issues related to immigration, cybersecurity, and terrorism. He left the government after Ms. Nielsen was fired and later became the head of national security relations for Google. He has been on personal leave from the company for the past several months after endorsing Mr. Biden and has been organizing other Republicans to campaign against Mr. Trump’s re-election.

“More than two years ago, I published an anonymous opinion piece in The New York Times about Donald Trump’s perilous presidency, while I was serving under him. He responded with a short but telling tweet: ‘TREASON?’” Mr. Taylor wrote in his statement.

“When I left the administration, I wrote ‘A Warning,’ a character study of the current commander in chief and a caution to voters that it wasn’t as bad as it looked inside the Trump administration — it was worse,” he added.

The disclosure of Mr. Taylor’s identity is likely to renew the debate over his motives and raise questions about whether his position in the Trump administration was senior enough to justify the decisions by The Times’s Opinion desk and the book’s publisher to keep his identity secret.

At the time, The Times published the essay with a note that said: “The Times is taking the rare step of publishing an anonymous Op-Ed essay. We have done so at the request of the author, a senior official in the Trump administration whose identity is known to us and whose job would be jeopardized by its disclosure. We believe publishing this essay anonymously is the only way to deliver an important perspective to our readers.”

Mr. Taylor’s decision to assail the president anonymously in the Times article created a sensation in Washington because of its claims about the president’s lack of character and inability to govern. In the book, Mr. Taylor described Mr. Trump as a “12-year-old in an air traffic control tower, pushing the buttons of government indiscriminately, indifferent to the planes skidding across the runway.”

Mr. Taylor’s essay has had less impact over time as an array of onetime Trump administration officials have come forward with names attached to publicly criticize the president’s leadership and character, among them the former defense secretary, Jim Mattis, and Mr. Trump’s third national security adviser, John R. Bolton. But Mr. Taylor’s essay was among the first crack in the White House defense and led to prolonged speculation about the writer’s identity, with readers pointing to specific passages in it and later the book as evidence of who must have been the author.

The White House engaged in its own lengthy hunt to identify who had written the article. In the days after its publication, Mr. Trump declared that he wanted the attorney general at the time, Jeff Sessions, to find the writer, saying, “I would say Jeff should be investigating who the author of that piece was because I really believe it’s national security.”

As late as last November, the Justice Department demanded to know from the publisher of the forthcoming book whether the author had violated any confidentiality agreements related to classified information.

The president last year called the author of the Times article a “gutless” bureaucrat and tweeted “TREASON?” In a statement ahead of the book’s publication last year, Stephanie Grisham, then the White House press secretary, called the author “a coward” who wrote a “work of fiction” filled with lies about the president.

“Real authors reach out to their subjects to get things fact checked — but this person is hiding, making that very basic part of being a real writer impossible,” Ms. Grisham said.

In the book, Mr. Taylor said he decided to remain anonymous because he believed revealing his identity would have allowed Mr. Trump and his allies to distract attention from the substance of the critique he leveled against the president.

“I have decided to publish this anonymously because this debate is not about me,” Mr. Taylor wrote. “Removing my identity from the equation deprives him of an opportunity to create a distraction. What will he do when there is no person to attack, only an idea?”

In his statement on Wednesday, Mr. Taylor acknowledged that “some people consider it questionable to levy such serious charges against a sitting president under the cover of anonymity.” But he said he his decision was justified.

“Issuing my critiques without attribution forced the president to answer them directly on their merits or not at all, rather than creating distractions through petty insults and name-calling,” Mr. Taylor wrote. “I wanted the attention to be on the arguments themselves. At the time I asked, ‘What will he do when there is no person to attack, only an idea?’ We got the answer. He became unhinged. And the ideas stood on their own two feet.”

The book’s publisher, Sean Desmond of Twelve Books, said in a statement that the company was proud of the book, which he said “every day seems more and more prescient.”

He added, “Miles Taylor has been a great publishing partner and we support him and the true act of political courage it took to tell his story.”

The publisher has said Mr. Taylor declined to take any advance payment for writing it, and has pledged to donate a large portion of any royalties to nonprofit organizations, including the White House Correspondents’ Association, the membership organization for reporters who cover the president.

The book topped the New York Times’s nonfiction best-seller list for the week of Dec. 8.

Mr. Taylor joined the Trump administration in 2017 as Ms. Nielsen’s deputy chief of staff before being promoted in 2018. Previously, he worked for two years for the House Homeland Security Committee, serving as an aide to Representative Michael McCaul, Republican of Texas, who was the chairman of the committee at the time.

As one of Ms. Nielsen’s top advisers, Mr. Taylor was part of the administration during some of the most controversial decisions of Mr. Trump’s first three years in office, including the ban on travel from predominantly Muslim countries, the decision to separate immigrant children from their parents at the border and the efforts to turn back asylum seekers.

His role in those events prompted protests among employees at Google when the company announced his hiring. At least one petition called for Google to fire Mr. Taylor, calling him “complicit in helping Nielsen tear apart thousands of immigrant families.”

Mr. Taylor also witnessed many of the clashes between Ms. Nielsen and Mr. Trump as the president demanded tougher action to keep immigrants out of the United States. Ms. Nielsen’s resistance to some of Mr. Trump’s demands — including shutting down the border with Mexico and shooting people crossing the border illegally in the legs to slow them down — eventually led to her dismissal.