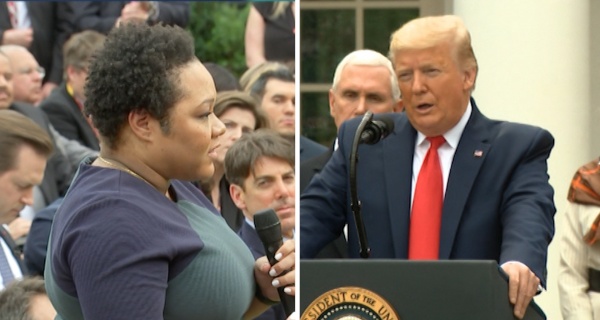 The president’s patronizing, white-savior talk will likely stop if he loses, and that should motivate us all.

The first question in Thursday night’s discussion about American racism is about “The Talk.” As moderator Kristen Welker tells both the 63 million viewers nationwide and the two white men running for president of the United States, this is the training black parents put their children through for survival. She says accurately that they feel they have no choice but to tell their kids that people outside their door — including and especially the police — may target them solely because they are black. There are certain behaviors to learn that may mitigate the risk of harm, but even those are no guarantee. “The Talk” is a regretful and in fact horrifying feature of black life, but it is so instinctual that it no longer requires explanation. Were I ever to have children one day, I have the script ready.

Yet I use this space to describe it not because Welker did a poor job. (Quite the opposite, and I say that for the entire evening.) No, it’s because white parents may be wholly unfamiliar with “The Talk.” This is why, when Welker asks Joe Biden and Donald Trump to speak to black families who have to deliver this kind of instruction to their children, the answer does not demand their eloquence or expertise.

However, Trump has never been terribly concerned with what black people need or want. After Biden answers Welker’s question capably, acknowledging his privilege and pledging to fight institutional racism, Trump avoids it entirely. Instead, he begins listing his trifling resumé of black uplift, all while claiming the same lie: that outside of Abraham Lincoln, possibly, “nobody has done more for the black community than Donald Trump.” The truth is that while there have been arguably more racist presidents — at least 12 presidents enslaved black people, folks; let’s not do this — I could scarcely conceive of one who has been more patronizing to us.

We know the routine by now. Despite it being called the FIRST STEP Act, Trump talks like his mediocre bill, which his own administration is sabotaging, got all of criminal justice reform done. Every bit that was needed in the country. During the debate, Trump says, “Criminal justice reform, [former President Barack] Obama and Joe didn’t do it. I don’t even think they tried because they had no chance at doing it. They might’ve wanted to do it. But if you had to see the arms I had to twist to get that done, it was not a pretty picture. And everybody knows it, including some very liberal people that cried in my office. They cried in the Oval Office.”

This version of the FIRST STEP Act’s path to passage — to say nothing of Trump’s barb at Biden later for not passing similar reforms during Obama’s presidency — stem from pure fiction. The procedural holdups in Congress in both instances came from the Republican-led Senate. And when the FSA finally did come up for a vote late in 2018 after being held up for about half a year, hardliners like Arkansas’ Tom Cotton and Louisiana’s John Kennedy tried to derail it with extremist amendments that would have, among other things, made it both more difficult for incarcerated people to qualify for release. Which was the central purpose of the law.

These Opportunity Zone loans that were part of his disastrous 2017 tax law? He alleges during his answer to a question about how black parents talk to their kids, that he has created “one of the most successful programs. People don’t talk about it. Tremendous investment is being made, biggest beneficiary, the black and Hispanic communities.” Well, according to Pew, most black businesses actually miss out on the tax breaks provided by the opportunity-zone program. And as we’ve reported previously, those black business owners were disproportionately screwed during the initial round of Covid PPP funding, as well.

This list of accomplishments Trump provided to put his name alongside Lincoln’s is already so embarrassingly meager even before you discover that it’s all a house of cards. But the real heart of the issue, of course, is that the obvious and virulent racism that results from Trump’s policies and his incompetence in office is what makes his boasting about his beneficence sting even more.

Trump spends the better part of his day watching Fox News, a propaganda network that vilifies black people and those who champion our liberation. He habitually embraces policy and practice that, almost universally, has inordinately harmful effects on our communities. His administration has worked purposefully to undo civil-rights protections for not just black people, but for marginalized populations across the board. Trump blames us and our protests for civil rights and equal treatment under the law for urban decay. Then, he declares cities in which unrest on our behalf is particularly prevalent to be “anarchist” and threatens to starve them of federal aid and life-saving care. Some of this happened just this week, by the way.

Never mind Trump claiming, yet again, that he is the “least racist person in the room” when there is a black woman moderating the debate (and he is who he is). It isn’t about what you say; it is about what you do. The Obama health care law lived up to its name: it has made coverage more affordable, and helped narrow the significant racial disparities between white patients and their counterparts of color. Black and Hispanic Americans, in particular, have made historic gains in coverage levels since the implementation of the ACA, according to a January assessment by the Commonwealth Fund. Per the study, the gap between black and white adult uninsured rates dropped by 4.1 percentage points. The difference between Hispanic and white rates fell 9.4 points. Now Trump, gleefully, wants to rush a nomination through the Senate to help rip this law away from the black people to whom he claims he’s been so very good.

This only scratches the surface of the sabotage. ProPublica reported last month that under President Trump, the U.S. Department of Justice “has pulled back on policing the police.” Whereas it entered into 15 consent decrees with law enforcement agencies suspected of systemic abuses of constitutional rights during the Obama presidency, it has done so with exactly zero during Trump’s. (Even George W. Bush’s DOJ did three.) Only one investigation into abuses has even been completed.

But the ProPublica investigation revealed something worse: The Trump Justice Department has been reportedly undermining the existing agreements between the federal government and abusive police forces across the country. So they are intentionally making the problem worse. But no worries, folks: Trump passed a criminal justice reform bill!

Oh, and as far as the HBCU bit, when Trump claims Thursday night that “I saved Historically Black Colleges and Universities”? Sure, the STEM funding in last year’s FUTURE Act gives these institutions tens of millions of dollars, but that isn’t what keeps their doors open. Moreover, Trump has spent the better part of this campaign making overtly racist appeals to suburban white families. Biden, he has told them, will destroy the suburbs by allowing “low-income housing” and “crime” into their neighborhoods. In June, Trump eliminated the Affirmatively Furthering Fair Housing Rule to put policy behind his rhetoric.

That action made it clear that he was trying to make the suburbs whiter, but this is not merely about home values. It is also about schools, and with whom these suburban families send their white children to class. Granted, a move for a black family into the suburbs in search of a better education for their kids doesn’t always work out — a recent study from my hometown, Cleveland, found that only three families out of 50 were satisfied with such a move. But the opportunity should be there, and the president shouldn’t be presenting an obstacle, particularly with his racist rhetoric and actions.

In the Covid era, studies and reporting have shown that black children have been particularly disadvantaged — whether it be due to being more likely to have parents who cannot work from home, less likely to have access to high-quality internet for homeschooling, or seeing their Title I schools face Trump’s threats to lose federal funding if they don’t return to unsafe in-person instruction. Disproportionate school discipline has even continued via Zoom, as one black fourth-grader in Colorado faced expulsion when a teacher spotted a BB gun in his bedroom.

And yet, faced with the chance to speak to parents of children like this, the president chooses instead to brag about all he’s done to make his life better. One out of every 1,000 black Americans has died from Covid-19, and it is as if Trump is still asking us, “What the hell do you have to lose?”

After all, why would the president continue to encourage voter suppression and intimidation, including by people allegedly paid by his own campaign? Why would someone who actually wanted to be the best since Lincoln recklessly inspire white-supremacist violence, still our nation’s top terror threat, with his own speeches and social media?

All Trump truly sees the need to do is to meet the very minimum standard for racial absolution so to win political office, not to affect actual change. He is the white oligarch who hands out the one scholarship to a black kid from the “inner city,” then brags about it to his cohort at the country club. Trump’s actions are reminiscent of a bank that sponsors a black little league baseball team, slapping its name onto their new uniforms, thinking that may help lure in some new subprime loan customers. Whether he’s trying to fool white moderates or depress the black vote, Trump isn’t acting in the interests for anyone beyond people like himself.

Even if he were sincere, black folks have never needed the pathetic charity of this president. We need the American safety net. We need plans to eradicate racism from the veins of our nation’s governments and systems. We need to survive. We sure as hell don’t need a savior. I hope that Biden realizes this, as well.

We want to be able to live our lives without the shadow and scourge of white nationalism. A significant step in that direction can be taken by defeating Trump in this election. It would merely be a relief to not hear him speak about us anymore. Why keep up this “No one better for the blacks since Lincoln” act if he isn’t in the White House any longer? That, to be honest, would be a relief. I’d prefer to just talk about the Trump whom we have always known: a charlatan of the highest order; the man who discriminated against black tenants; who wanted five innocent schoolchildren fried by the state; who rose to political prominence with birtherism. The soon-to-be-former president, hopefully, has a history of racism that cannot be shouted away by his feeble proclamations.

The best and only thing Donald Trump could do for black people right now? Lose on November 3rd.