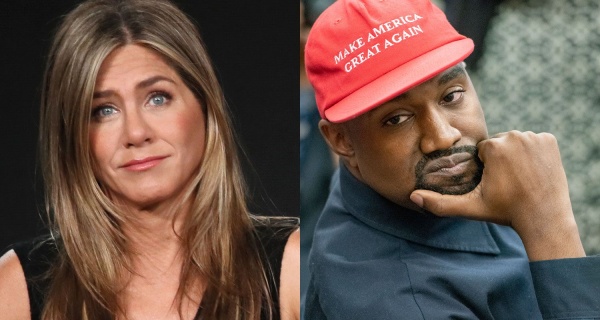 Jennifer Aniston has something to tell people who are thinking about voting for Kanye West: Don't. (Oh, yes, in case you haven't heard—the rapper's name will be on ballots come Election Day.)

Aniston made her stance on who she's voting for (and not voting for) perfectly clear via an Instagram post published October 23.

“#IVOTED  for @joebiden and @kamalaharris. I dropped my ballot off, and I did it early,” she wrote. “I voted for them because right now this country is more divided than ever. Right now, a few men in power are deciding what women can and can’t do with their own bodies. Our current President has decided that racism is a non-issue. He has repeatedly and publicly ignored science... too many people have died.”

She continued, “I urge you to r consider who is going to be most affected by this election if we stay on the track we’re on right now... your daughters, the LGBTQ+ community really, our Black brothers and sisters, the elderly with health conditions, and your future kids and grandkids (who will be tasked with saving a planet that our leadership refuses to believe is hurting). This whole thing isn’t about one candidate or one single issue, it’s about the future of this country and of the world. Vote for equal human rights, for love, and for decency.”

Aniston then ended her post with this simple message: “It’s not funny to vote for Kanye. I don’t know how else to say it. Please be responsible.”

According to NME, West's name will appear on the presidential ballot in 11 out of 50 states, and he's polling at just 2%. Still, that isn't stopping some people from voting for him, stealing numbers away from other candidates.

Maybe Aniston's message will get through to them. I would follow her off a cliff, so…!