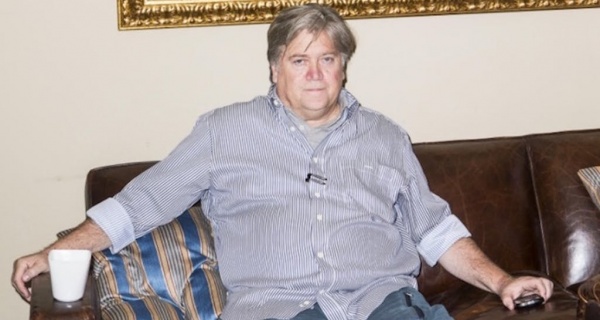 YouTube, Google's video subsidiary, is providing massive distribution to a 22-minute video packed with disinformation about Joe Biden and his son, Hunter. The video, which appeared on Sky News Australia, features Steve Bannon, formerly a top adviser to Trump, who was charged with fraud and money laundering by federal prosecutors in August. Among other things, Bannon, who is currently free on bail, falsely claims a trove of emails prove Joe Biden has "real business" with the Chinese Communist Party and could not receive a security clearance.

The segment has been viewed 2.9 million times on YouTube in two days and is being heavily promoted by YouTube's algorithm. At the same time, YouTube is running ads from the Trump campaign at the top of its homepage. Those ads feature another video about the Bidens with similar misinformation.

Bannon's interview concerns a series of articles published by the New York Post that allegedly disclose emails and other materials from Hunter Biden's laptop. Rudy Guiliani, Trump's lawyer, says he obtained the hard drive from a computer repair shop in Delaware. The repair shop owner claims Hunter Biden dropped off the laptop and never retrieved it. Both Sky News Australia and the New York Post are owned by Rupert Murdoch, the right-wing media mogul.

According to the New York Times, the key article about the laptop was "written mostly by a staff reporter who refused to put his name on it." That reporter, Bruce Golding, "did not allow his byline to be used because he had concerns over the article’s credibility." Throughout the newsroom reporters "questioned whether the paper had done enough to verify the authenticity of the hard drive’s contents" and "also had concerns about the reliability of its sources and its timing." One of the reporters whose name ended up attached to the piece "learned that her byline was on the story only after it was published."

Nevertheless, YouTube is broadcasting an even less accurate version of the story, as told by Steve Bannon, to millions.

The central allegation in the New York Post's reporting involves Burisma, a Ukrainian energy firm that employed Hunter Biden. The tabloid claims a "smoking gun email" from a Burisma executive, Vadym Pozharskyi, to Hunter Biden says, "Dear Hunter, thank you for inviting me to DC and giving an opportunity to meet your father."

Why is this a smoking gun? The Sky News host, Sharri Markson, said that "the top prosecutor" in Ukraine, Viktor Shokin, "was investigating Burisma." Joe Biden, according to Markson, "threatened to withhold $1 billion in aid for Ukraine." Markson asks Bannon: "Does this lead to the suggestion...that Biden may have corruptly used American foreign policy as leverage to enrich his family?"

"I don’t think there’s any doubt about that," Bannon replies. Except this is a lie. Burisma was not under active investigation by Shokin when Biden called for his ouster in 2015. Shokin was corrupt, and his removal was advocated by the international community. Biden pushing for Shokin's ouster subjected Burisma to more scrutiny, not less.

Biden says he never met with Pozharskyi, and that no record of a meeting appears on his official calendar. But it doesn't matter. Even if Joe Biden did meet with Pozharskyi there is no evidence Biden took any action to benefit Burisma. The email is a distraction from that fundamental point.

Bannon, perhaps understanding the weakness of this central claim, spends most of his time discussing another email from Hunter Biden, which concerns a potential deal with a Chinese energy company. Here is how Bannon describes it in the video:

The Bidens are in business, and I mean real business [with Chinese Communist Party-controlled companies], where they’re getting $10 million a year in finder’s fee. Plus 50% ownership of a joint venture, which is fully financed by a Chinese energy company – they get 50% of the equity and of that Joe Biden gets 10% right off the top.

There is no email that establishes that Joe Biden is in business with a Chinese energy company. The New York Post published an email from a consultant named James Gilliar to Hunter Biden discussing a potential deal with a now-bankrupt Chinese company, CEFC. In discussing an equity distribution under the deal, Gilliar writes "10 held by H for the big guy?"

The New York Post did not claim that "the big guy" was Joe Biden. Subsequently, Fox News, also owned by Murdoch, reported "[s]ources told Fox News that 'the big guy' is a reference to the former vice president." We don't know who these sources are or how they would know the information.

Regardless, there is no evidence that Hunter Biden ever consummated the deal with CEFC, much less than his father was involved. Joe Biden has released 21 years of tax returns, including the years of this alleged transaction, and there is no indication of any China-related income.

Nevertheless, Bannon claims this non-existent deal between Joe Biden and a defunct Chinese energy company is a "massive national security issue" that disqualifies him from the presidency. "I don’t think Joe Biden today could get a security clearance, so I don’t know-how in 16 days he’s going to stand and run for to be commander-in-chief of the United States," Bannon says.

Notwithstanding the demonstrably false claims made by Bannon and the Sky News Australia host, the YouTube algorithm is pushing the video as "recommended" viewing.

Algotransparency, a public tool that tracks which videos are recommended on YouTube, found that the Sky News Australia segment was being recommended on 157 different YouTube channels — nearly three times more than any other video about Biden.

“Given the information currently available, content about this news story is allowed on YouTube. We will continue to evaluate content against our policies as new details emerge,” Ivy Choi, a YouTube spokesperson, told Popular Information.

As YouTube pushes misinformation about Biden through its algorithm, it is also profiting from a large Trump campaign at the top of its homepage pushing similar falsehoods.

The Trump campaign video claims that the alleged Hunter Biden emails contradict Joe Biden's claim that he didn't discuss business with his son, which is not true. It also claims the emails prove Biden met with a Burisma executive, which is also not true. It also repeats the allegation about the proposed deal with the Chinese energy firm, as if it actually happened and Biden profited. "Joe Biden sold America out to make his family rich," the ad concludes.

YouTube's policy bans ads that "demonstrably false claims that could significantly undermine participation or trust in an electoral or democratic process." The company did not immediately respond to a request for comment.

The myth of social media censorship

For Bannon, however, the fix is in. Bannon urged the Department of Justice to "shut it down" or throw social media executives in jail.

Jack Dorsey, Zuckerberg, and the guys at Google, to me, the Justice Department should go in and shut it down on Monday. If they don’t shut it down, throw them in jail...These oligarchs in Silicon Valley are out of control. We don’t have free speech in this country.

Bannon's trial for fraud and money laundering is scheduled to begin in federal court on May 24, 2021.