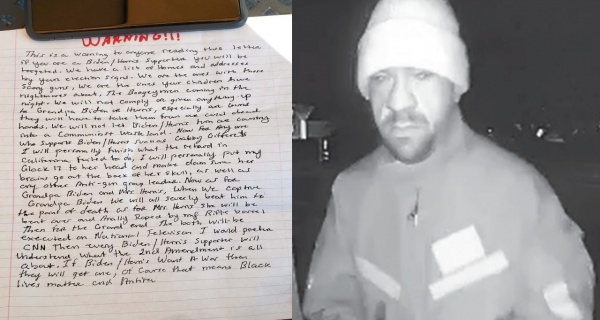 U.S. Secret Service agents have charged a Maryland man with threatening a presidential candidate, saying he wrote a letter in which he warns of beating “Grandpa Biden,” raping Sen. Kamala Harris, and targeting the supporters of the Democrats.

“We have a list of homes and addresses by your election signs. We are the ones with those scary guns, We are the ones your children have nightmares about. The Boogeymen coming in the night,” James Dale Reed, 42, allegedly wrote.

The Frederick man was captured by a home security camera delivering the threatening letter in the middle of the night to a doorstep in Frederick, agents wrote in charging documents.

Reed was arrested last week by Frederick Police and remains held without bail. After agents asked for his fingerprints and a handwriting sample, he confessed to writing the letter because he was upset at the political situation, they wrote in charging documents.

According to the federal criminal complaint, “The defendant, James Dale Reed, knowingly and willfully threatened to kill and to kidnap and to inflict bodily harm upon Joseph Biden and Kamala Harris, who are major candidates for the office of the President and Vice President of the United States.”

He allegedly explained “this will happen" in reference to the contentious presidential race and fraught state of national politics. Reed claimed he didn’t know the homeowner, but delivered the letter to the first house he came upon with signs for Democratic presidential candidate Joe Biden and his running mate.

The letter describes in graphic detail violent actions its writer would take against the Democrats — an apparent scare tactic against voters.

Reed was previously known to Secret Service agents for threatening someone in their protection in 2014, according to court records.

An apparent Facebook page for Reed describes him as a semi-pro bodybuilder in Frederick. In one post last week, he writes about his home being searched. He calls Frederick Police a “bunch of thugs and gang members."

“Conduct like this that threatens major candidates and fellow citizens only undermines our democracy and the principles upon which America was founded," Hur said in a statement from his office. “We will not tolerate threatening conduct that seeks to intimidate, harass or dissuade Americans from exercising their right to vote.”

The case is just the latest example of politically-themed violence and threats in the run up to the 2020 Presidential Election on Nov. 3.

A Baltimore County man is charged with assault for allegedly blasting a shotgun last week at supporters of President Donald Trump. Douglas Kuhn, 50, who lives in Kingsville north of Perry Hall, was placing a "Black Lives Matter sign in his yard when a pickup truck with a Trump campaign sign drove by and honked at him.

Kuhn allegedly grabbed a shotgun and fired once. No one was hurt. On Monday, a Baltimore County judge order him to await trial on home detention. District Judge Philip Tirabassi expressed dismay at such political violence.

“How did we get to this point?” the judge asked aloud.

In Baltimore City, State’s Attorney Marilyn Mosby has expressed her own concerns about political violence. In a memo to her staff, Mosby said they will prosecute fully anyone who threatens voters.

“Be vigilant for these types of cases and ensure that such cases receive a forceful response from our office,” she wrote.