How Trump And The GOP Moved $8.1 Million Of Donor Money Into The President’s Business 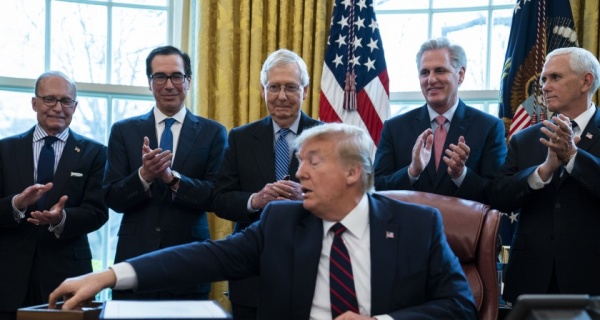 Donald Trump hasn’t donated a dollar to his own reelection effort, but his businesses have managed to take in millions from others.

When Donald Trump announced that he was running for president in 2015, he promised he would pay for his own campaign. “I don’t need anybody’s money,” the billionaire said. “I’m using my own money. I’m not using the lobbyists. I’m not using donors. I don’t care. I’m really rich.”

Five years later, things have changed. Donald Trump is still really rich, of course, but he’s no longer touting the amount of money he’s putting into his campaign. The reason is simple: After spending $66 million on his 2016 run, the president has donated exactly $0 to his 2020 bid, according to the latest Federal Election Commission filings, released Tuesday night. Instead, Trump has managed to extract millions of dollars from his own reelection effort, by having his private companies charge the campaign for things like rent, food, and even I.T. help. In this way, the president has shifted $2.4 million from his political supporters to his private business, according to an analysis of filings.

And that’s just the start of the story. The Republican National Committee has pushed another $2.6 million to Trump’s private businesses since the day he took office. Then there are two joint-fundraising committees, which raise money on behalf of both the campaign and the RNC. Those groups, named Trump Victory and the Trump Make America Great Again Committee, have steered an additional $3.1 million into the president’s companies. Add it all up, and the Trump campaign, the RNC, and their joint-fundraising committees have moved $8.1 million of donor money into Trump’s coffers, according to the analysis.

The biggest beneficiary has been the president’s assortment of hospitality holdings, which have needed some help. In 2018, after profits plunged at Trump National Doral, a 643-room golf resort, the RNC upped its spending from $3,000 to $603,000, shelling out for catering, venue rentals, and travel expenses. The Trump International Hotel in Washington, D.C., which does not appear to be earning enough money to cover its interest expenses, has received at least $1.1 million from the campaign, the RNC, and their joint-fundraising committees. Since mid-March, as hotels nationwide have been contending with the coronavirus, those same political groups have spent more than $1.6 million at the president’s hotel properties.

Some of the payments are more difficult to understand. A management company called the Trump Corporation, in which the president holds a 100% stake, has charged the campaign $289,000. FEC filings list the charges as “legal & IT consulting.” But it’s unclear what legal and I.T. services the Trump Corporation is providing, or why the campaign selected a management company to offer those services. Neither the Trump campaign nor the Trump Organization has been willing to offer more detail about those payments.

The campaign has insisted that it is following federal law. That may well be true, so long as the transactions are happening at fair-market rates. It’s difficult to confirm that, however, because the campaign isn’t disclosing key details about the deals, like how much space it is renting inside Trump Tower. The RNC says it considers security, price, convenience, and its donors' wishes when choosing Trump properties, but it’s also reluctant to divulge many details. “We don’t itemize beyond what is required by the FEC,” a spokesperson said in a statement.

Despite the pledge, Trump made in 2015, none of this was particularly difficult to foresee. Twenty years ago, Trump floated his political ambitions in an interview with Fortune. Unlike many billionaires interested in politics, he seemed determined not to throw away too much of his own money. “It’s very possible,” he said, “that I could be the first presidential candidate to run and make money on it.”