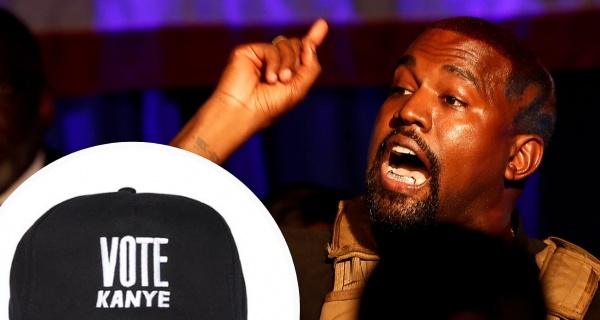 Some on Twitter are calling the Chicago superstar's campaign efforts disruptive to the upcoming presidential election.

Kanye West and his last-ditch effort to place his name in the ring as a White House hopeful has no signs of slowing. The Chicago producer, artist, and designer took to social media to flaunt write-in voting support while also pushing a “Vote Kanye” merchandise line to boot.

West, 43, went on one of his sporadic Twitter bursts beginning on Thursday (Oct. 8) to roll out his merch line, featuring the phrases “Vote Kanye” and “Kanye 2020 Vision.” A look on the merch website reveals a line of hoodies, t-shirts, and dad hats emblazoned with the phrase. There is also a sweatshirt that reads “GOD SAVE AMERICA” in bold lettering, with the prices of the items far more affordable than some of his Yeezy brand fare.

1. RESTORE FAITH AND REVIVE OUR CONSTITUTIONAL COMMITMENT TO FREEDOM OF RELIGION AND THE FREE EXERCISE OF ONE’S FAITH, DEMONSTRATED BY RESTORING PRAYER IN THE CLASSROOM INCLUDING SPIRITUAL FOUNDATIONS.

3. PROVIDE LEADERSHIP TO RESTRUCTURE OUR COUNTRY’S EDUCATION SYSTEM TO SERVE THE MOST AT-RISK AND VULNERABLE POPULATIONS ALLOWING THE WIDEST POSSIBLE RANGE OF EDUCATIONAL AND VOCATIONAL PATHS TO JOB OPPORTUNITIES AND CAREER SUCCESS.

4. MAINTAIN A STRONG NATIONAL DEFENSE, FULLY PREPARED, BUT NOT SO QUICK TO TIE UP OUR COUNTRY’S YOUNG MEN AND WOMEN IN FOREIGN QUAGMIRES THAT DO NOT ADVANCE OUR NATIONAL INTEREST, AND WHICH LAST FOR DECADES.

5. REFORM THE LEGAL SYSTEM TO PROVIDE TRUE JUSTICE, EQUITABLE FOR ALL CITIZENS, REGARDLESS OF RACE OR ABILITY TO DEFEND ONESELF IN COURT. RECOGNIZE THE DISPARITY IN VERDICTS AND PRISON SENTENCES, CAUSED BY THE LACK OF FINANCIAL RESOURCES OR LEGAL ASSISTANCE.

Each of the points has corresponding Bible verses underneath them in a much smaller font. Continued scrolling also shows ways supporters can donate to the West 2020 campaign at varying levels. West also shared a video of him playfully placing some of his hat wear atop the debating Vice President Mike Pence and Sen. Kamala Harris from their Wednesday (Oct. 6) debate in Utah.

West shifted gears from shilling his product to point to his exceptional financial gains, with an image of an OK! News piece stating that he now is in possession of a $5 billion fortune.

“From $53 million in debt to a net worth of $5 billion in 4 years. Thank you, Jesus. I know I fall short, but I repent. I am fully in service to our Lord and Savior Jesus Christ. We are building schools of the future. Thank God for providing the increase,” West wrote in the tweet.

A flurry of commentary ensued after the image went wide with many noting that because of being disqualified from a number of state ballots, he’s listed as a VP selection but by no means is he seen as a threat to shift the vote radically. However, dissenting opinions are calling his actions disruptive and self-serving but those criticisms have failed to deter West in times past.