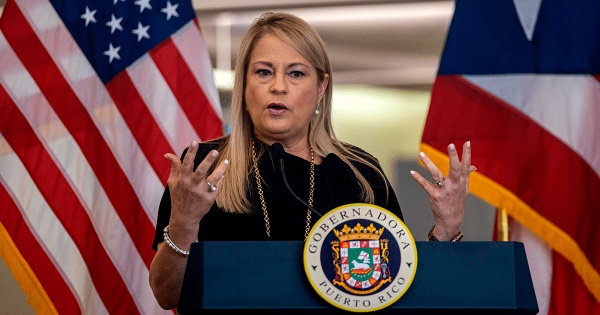 Years after Hurricane Maria devastated the island of Puerto Rico and Donald Trump insulted its residents by jump shooting them rolls of paper towels and blaming them for throwing the US budget “out of wack,” the island’s governor, Wanda Vázquez has decided to let Donald Trump know where she stands… by endorsing him for President of The United States.

That’s right. Much to the chagrin of Puerto Ricans and Latinos everywhere, Politico is reporting that Governor Wanda Vázquez asked Boricuas everywhere (especially in the battleground that Florida has become) to go out and vote for the man who illegally withheld hurricane aid to Puerto Rico for months.

“I ask all the Puerto Ricans who are listening to me to go vote… and evaluate who has represented themselves as someone who thinks about Puerto Ricans and their needs in the most difficult moment: It’s Donald Trump.”

This comes as a shock to many if not most Latinos as Donald Trump’s racist resentment towards the commonwealth island has been well documented over the years. From slow-walking help to the hurricane-ravaged island in 2017 to withholding much-needed hurricane aid (and stimulus checks), to contemplating selling the island in order to buy Greenland because Puerto Rico was, and we quote, “dirty” and “poor,” Donald Trump has shown nothing but contempt for the home of Latino American citizens.

But of course, it’s an election year so it didn’t surprise anyone when the Racist-In-Chief attempted to shore up some Puerto Rican support by floating a plan that would give the island $13 billion in much-needed aid to repair their electrical and education infrastructure three years after Maria left the island in shambles. This after Trump stated he would no longer financially support the island because it was “corrupt.” That’s pretty rich coming from the biggest government grifter this country has ever seen.

Of course, the Trump team jumped all over this endorsement and are already using it to bolster Trump’s popularity.

Trump Victory, the joint committee of Trump and the Republican National Committee, welcomed the governor’s endorsement as “further proof of the enthusiasm that President Trump is generating among Boricuas and all Hispanics,” spokesperson Danielle Alvarez said.

Naturally, anyone with common sense would know that this is basically a quid pro quo in plain sight as Trump is dangling money in exchange for political support.

“There’s no other explanation. After all, she’s from the pro-statehood party on the island and the president has made it clear that he’s vehemently against statehood,” said Florida Rep. Darren Soto, a Democrat who is the state’s first congressman of Puerto Rican descent.

Whether or not Vázquez’s endorsement will sway Puerto Ricans to vote against their interest remains to be seen but what we wouldn’t be surprised if this has the reverse effect and the good people of Puerto Rico dust off that “Guillotina” and march it right back to the capitol to make their voices heard.