'If You Don't, I Won't Forget It': Trump's Threat To Bill Barr To Charge Joe Biden And Obama Over Spygate - And He Wants Hillary Clinton Indicted Too 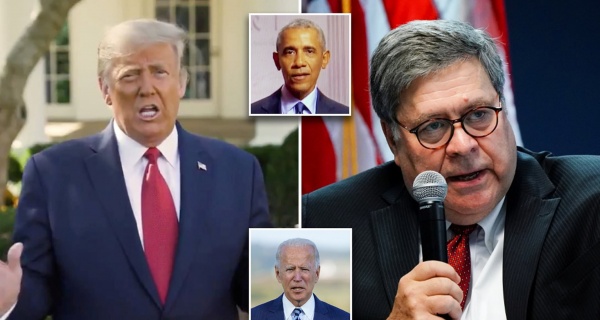 *He said if Barr doesn't indict people Trump identified as committing crimes, 'I won't forget it'

*He said 'that includes Obama and it includes Biden'

Donald Trump said in a televised interview that he has spoken to Attorney General Bill Barr about the high-stakes Durham probe and received assurances the government has 'plenty' of evidence to bring charges against his main political rivals.

He made the extraordinary statement – which if accurate would be a breach of normal firewalls between prosecutors and the executive in a politically charged investigation – in an appearance on the Fox Business Network, where he also pronounced himself cured of the coronavirus.

The Justice Department did not immediately respond when asked to confirm the president's characterization of his conversation with Barr.

Trump also repeatedly blasted Hillary Clinton for her email scandal that was a feature of the 2016 campaign and said former President Barack Obama and 2020 rival former Vice President Joe Biden should be charged with spying on his campaign.

'Unless Bill Barr indicts these people for crimes, the greatest political crime in the history of our country, then we're going to get little satisfaction unless I win and we'll just have to go, because I won't forget it,' Trump said.

'But these people should be indicted, this was the greatest political crime in the history of our country and that includes Obama and it includes Biden. These are people that spied on my campaign and we have everything,' Trump said.

He was referencing U.S. Attorney John Durham's probe of alleged FBI misconduct during the Russia probe, instigated by Barr's appointment of Durham, a career prosecutor.

Describing the government's evidence, Trump said: 'Now they say they have much more, OK? And I say, Bill, we've got plenty, you don't need any more. We've got so much, Maria, even -- just take a look at the Comey report, 78 pages of kill, done by Horowitz, and I have a lot of respect for Horowitz, and he said prosecute. He recommended prosecute and they didn't prosecute. I was -- I couldn't believe it, but they didn't do it, because they said we have much bigger fish to fry,' he said.

He was speaking to Fox Business host Maria Bartiromo. He praised DOJ Inspector General Michael Horowitz, whose lengthy report included an array of findings critical of the conduct of FBI agents involved in the Russia probe.

Trump also attacked federal prosecutors who obtained a guilty plea from former national security advisor Mike Flynn, and who secured a sentence of longtime Trump advisor Roger Stone. Trump commuted Stone's sentence before he was to appear in prison. Former campaign chair Paul Manafort is in home confinement after getting a 7 1/2 year sentence on corruption charges.

Barr admonished Trump to avoid public comments after his remarks and tweets about the Stone case, and reportedly argued against the commutation of his sentence after conviction for lying to Congress about his contacts with WikiLeaks and witness tampering.

On Thursday, Trump spoke repeatedly about the government's evidence, having previously said he tries to keep his distance from prosecutions. He indicated his declassification of materials was designed to aide prosecution.

'But, it's still not that easy, you have a deep state, you have a group of people that don't want to have documents shown, which tells you bad thing, you know, but they -- they have to give them ultimately and we're getting them, you know,' he said.

The president indicated Barr's own reputation was on the line.

'To be honest, Bill Barr’s gonna go down either as the greatest attorney general in the history of the country or he’s gonna go down as a very sad, sad situation. I mean, I’ll be honest with you. He’s got all the information he needs. They wanna get more, more, more, they keep getting more, I say: "You don’t need anymore. You got more stuff than anybody’s ever had."'

Trump also said he would 'get involved' with prosecuting Hillary Clinton, having vowed to 'lock her up' during his 2016 campaign.

'I've never seen such liars as this, they're worse than crooked Hillary, she was worse in other ways. She was worse when she deletes 33,000 e-mails illegally and she should be indicted for that,' Trumps' aid.