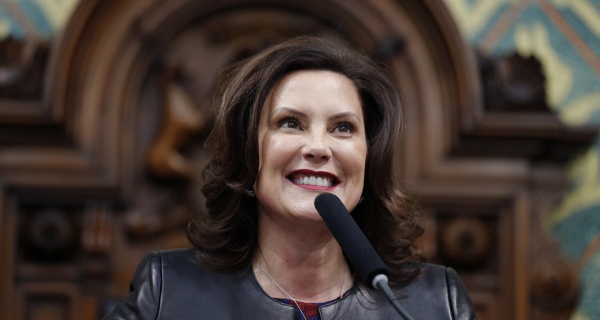 Six men are accused of participating in what the FBI is calling a “violent” militia scheme involving people from several different states to kidnap Gov. Gretchen Whitmer as a hostage and overthrow the Michigan government.

“The United States, including the FBI,” is investigating a conspiracy to kidnap the governor of Michigan," the criminal complaint reads.

6 men named in the complaint

Officials said they became aware of the conspiracy in early 2020.

“A group of individuals were discussing the violent overthrow of certain government and law enforcement components,” the complaint reads.

Croft and Fox agreed to recruit others to take “violent action against multiple state governments that they believe are violating the U.S. Constitution,” federal officials said.

On June 6, Croft, Fox, and around 13 others from multiple states gathered in Dublin, Ohio, to discuss creating a society that followed the Bill of Rights and allowed them to be self-sufficient, officials said. A confidential informant for the FBI was at the meeting, according to court records.

They talked about different ways to achieve their goals, from peaceful to violent actions, feds said.

“Several members talked about murdering ‘tyrants’ or ‘taking’ a sitting governor,” the criminal complaint says. “The group decided they needed to increase their numbers and encouraged each other to talk to their neighbors and spread their message.”

Fox is accused of reaching out to a Michigan-based militia group to help in the scheme, officials said.

The group had already been brought to the FBI’s attention in March 2020 by a local police department, court records show. At the time, members of the militia group were trying to find the addresses of law enforcement officers, police said.

A member of the militia was interviewed by the FBI and agreed to become an undercover source, according to authorities.

Police said the militia group regularly meets in remote parts of the state to run through tactical drills and train with guns.

On June 14, one of the founders of the militia group said he had been introduced to Fox, according to the confidential source. Fox invited the leader to meet at his Grand Rapids business later in the week, the complaint says.

On June 18, the confidential informant secretly recorded audio of a meeting in which Fox and militia leaders, including Garbin, met at a Second Amendment rally at the state Capitol in Lansing, the FBI said.

While trying to recruit more members for the operation, Fox told Garbin and the informant that he planned to attack the Capitol and asked them to combine forces, according to court records.

During a phone call with a confidential FBI informant, which was recorded by officials, Fox said he needed 200 men to storm the Capitol building and take hostages, including Whitmer.

Fox said they would try the governor for treason, authorities said.

The plan was to be executed before the November 2020 election, court documents show.

On June 20, Garbin, Fox, and several others went to Fox’s Grand Rapids business, meeting in the basement, which was accessed through a trap door hidden under a rug on the main floor, according to officials.

Fox collected everyone’s cellphones in a box and carried them upstairs to prevent the meeting from being monitored, authorities said. An FBI informant was wearing a recording device and captured audio of the meeting, officials said.

During the meeting, members discussed plans to assault the Capitol and use Molotov cocktails to destroy police vehicles, court records say.

They also talked about meeting over the first weekend of July for tactical and firearms training, authorities said.

During a private Facebook live stream on June 25, Fox complained about the state controlling the reopening of gyms, calling Whitmer “this tyrant b****," the criminal complaint says.

“I don’t know, boys, we gotta do something," he said, according to the FBI. “You guys link with me on our other location system, give me some ideas of what we can do.”

On June 28, Fox, his girlfriend, Garbin, Franks, Caserta, and the FBI informant attended a tactical training exercise at the Munith, Michigan, home of a militia member, according to officials.

Franks left after the training, but others, including Fox, Garbin, Caserta, and the informant, stayed there and were told to leave if they weren’t willing to participate in attacks against the government and kidnap politicians, FBI officials said.

Fox, Garbin, Caserta, and the informant stayed for the rest of the meeting, records show.

Over the weekend of July 10-12, Fox, Croft, Garbin, Franks, Caserta, the informant, and others went to Cambria, Wisconsin, to participate in firearms training and other combat drills, officials said.

Croft, Garbin, and another member of the militia group tried to construct an improvised explosive device using black powder, balloons, a fuse, and BBs for shrapnel, according to authorities.

The devices didn’t work as planned, the complaint says.

Franks also brought and fired a rifle with a silencer on it, FBI agents said.

On July 18, Garbin, Fox, Croft, Harris, Franks, the informant, and others met in Ohio to talk about attacking a Michigan State Police facility, officials said.

In a separate conversation, Garbin suggested shooting up Whitmer’s vacation home in Michigan, the informant said.

Garbin told the informant and others that he didn’t want to go after the Capitol, but he was “cool” with going after Whitmer’s vacation home, even if it was only to destroy property, according to court documents.

During a July 27 meeting at Fox’s business, Fox said the best opportunity to abduct Whitmer would be when she was arriving at or leaving her vacation home or the official governor’s summer residence.

He described it as a “snatch and grab, man,” officials said.

Fox said after kidnapping Whitmer, they would move her to a secure location in Wisconsin for “trial," officials said.

He suggested recruiting a realtor to help them find the exact location of the vacation home and collect information about the surrounding homes and structures, FBI officials said.

The informant said Fox stressed the importance of mapping out the surrounding properties and recruiting plumbers and electricians to read blueprints and refine their strategy.

On July 27, Fox asked in an encrypted group chat that included Garbin, Harris, Franks, and the informant, “OK, well how’s everyone feel about kidnapping,” authorities said. Nobody responded, officials, said.

“We about to be busy ladies and gentlemen,” Fox posted in a private Facebook group, according to court records. “This is where the Patriot shows up. Sacrifices his time, money, blood, sweat, and tears. It starts now, so get f****** prepared!!”

When Fox asked the group about kidnapping Whitmer during an Aug. 9 tactical training session in Munith, Garbin was reluctant to talk about the plan in that setting, officials said.

The FBI said after the call, Fox, Franks, Garbin, Harris, and an informant communicated in an encrypted group chat, during which Harris said, “Have one person go to her house. Knock on the door and when she answers it, just cap her ... at this point. F*** it. I mean ... f***, catch her walking into the building and act like a passer-by and fixing dome her than yourself, whoever does it."

In a follow-up chat about the plan, Franks told the informant, “OK, sounds good. I’m in for anything, as long as it’s well-planned,” according to authorities.

During a July 24 call, Fox said he had researched Whitmer’s office in Lansing and believed it was only ceremonial, authorities said.

When Fox wondered whether the group should “party it out, make a cake and send it,” the informant believed he was referencing sending a bomb to Whitmer, according to the complaint.

“In all honesty right now, I just wanna make the world glow, dude,” Fox said another time, according to the FBI. “I’m not even f****** kidding. I just wanna make it all glow, dude. I don’t f****** care anymore. I’m just so sick of it. That’s what it’s gonna take for us to take it back. We’re just gonna have to. Everything’s gonna hve to be annihilated, man. We’re gonna topple it all, dude. It’s what great frickin' conquerors, man. We’re just gonna conquer every f****** thing, man.”

Fox and Garbin further discussed the government needing to collapse because it has become so tyrannical, officials said.

On July 26, Fox said he hadn’t heard back from the “baker,” which meant an explosives manufacturer, according to the FBI informant.

“Maybe we should just make a bunch of cupcakes and send them out,” Fox said, according to authorities. He was referencing a more widespread bombing campaign, the FBI alleges.

Garbin, Harris, Franks, Caserta, the informant and three others met at Harris' house in Lake Orion on Aug. 23, officials said.

They talked about concerns that the group had been infiltrated by authorities, so they were all required to confirm their identities, according to authorities.

The informant said Caserta asked Franks, “Franks, where you at?” Franks responded, “Same place. I’m ready to get it on. Doesn’t matter. It could be ‘cause somebody looked at us wrong," officials said.

“Go on someone’s property and stuff like that -- I would rather not scare them,” Caserta said, according to the FBI. “Especially if it’s a f****** political parasite. The world would be better without that person, I’ll say that.”

Court records show they talked about surveilling the vacation home to prepare for attacks on Whitmer, and Franks told them he recently spent almost $4,000 on a helmet and night vision goggles.

The group agreed to move their chat to a different encrypted messing application to address concerns about being infiltrated, authorities said.

Fox, the informant, and another person conducted surveillance of Whitmer’s vacation home on Aug. 29, officials said.

Fox tried to use his cellphone to find the residents, but they had trouble, court records show. He called a friend who had helped them in the past, and that person told him where the home was, even sending pictures from the internet, according to the FBI.

When they found the home, they took pictures and slow-motion videos from their vehicle as they drove past and talked about doing surveillance from the water, the criminal complaint says.

The third person looked up nearby police departments and estimated how long it would take officers to get to the vacation home, authorities said.