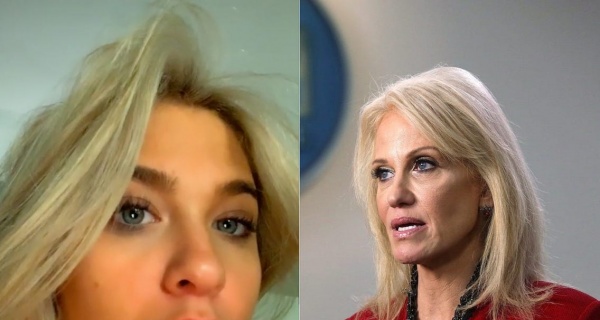 Kellyanne Conway is battling both the coronavirus and her own daughter’s attempts at going viral on social media.

The former White House counselor is in quarantine after being diagnosed with COVID-19 on Friday — with her teenage daughter Claudia documenting every move.

The 15-year-old posted video on TikTok on Monday showing the pair arguing over the teen announcing her mom’s positive test on social media last week.

“You caused so much disruption. You lied about your f—ing mother about COVID? About COVID?!” Kellyanne yells while being surreptitiously recorded by her daughter as the two lie in bed.

“That’s how I interpreted it,” Claudia responds, to which her mother says, “Interpreted it?” before realizing she’s being filmed.

Claudia appears to have accused her mother of lying to her about her test results last week.

In another deleted video, the teen explains her confusion, saying, “You said it was negative, so I spent the day with you,” according to the Sun.

Claudia announced her own coronavirus diagnosis on Sunday.

Later Monday night, she posted a new video to clear the air with her mom.

“Little clarification from my previous posts,” Claudia wrote to her 1.2 million followers. “my mother claims that she did not lie to me. she had three tests done. first negative, second two positive. we were not in communication. i misinterpreted it.”

In the new clip, Kellyanne can be heard in the background demanding that she set the record straight.

Kellyanne responded on Twitter, while also taking a swipe at others commenting on the president’s diagnosis.

“My daughter, Claudia, is beautiful & brilliant. She has access to top doctors & health care & lives comfortably,” she tweeted. “Like all of you, she speculates on social media. Yet she’s 15. You are adults. We have COVID, but it’s clear who’s really sick.”

Claudia and Kellyanne have warred over the teen’s prolific posts before — including in July when Kellyanne and her husband, George Conway, kicked their anti-Trump daughter off social media.