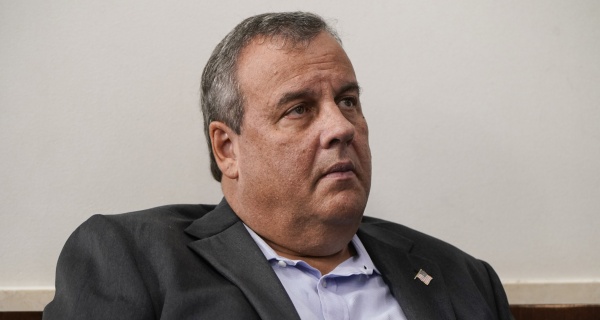 Chris Christie was called out for checking himself into hospital after experiencing mild COVID-19 symptoms after months of downplaying the virus' dangers, failing to take recommended precautions, and sounding cavalier and uncaring by remarking that Americans were "gonna have to" accept high coronavirus death tolls.

The former New Jersey governor, who helped President Donald Trump prepare for Tuesday's presidential debate, announced on Saturday that he was checking himself into a hospital as a precautionary measure.

"In consultation with my doctors, I checked myself into Morristown Medical Center this afternoon," Christie said on Twitter. "While I am feeling good and only have mild symptoms, due to my history of asthma we decided this is an important precautionary measure."

When other people got COVID-19, Chris Christie said some Americans are just gonna have to die. Now that he has COVID-19, he's checking himself into the hospital as soon as he feels even mild symptoms. When he said we have to accept people dying he didn't mean him. He meant us. pic.twitter.com/cgD0GnjMCW.

Earlier that day, Christie confirmed on Twitter that he had tested positive for the coronavirus.

News of Christie's hospitalization on Saturday prompted some to brand him a hypocrite, citing a CNN interview in which Christie pushed for the country to reopen despite several models forecasting that thousands of people could die daily from COVID-19.

Bash then pushed Christie on whether people would be able to accept reopening after a Trump administration model projected daily COVID-19 deaths could top 3,000 by June and that 134,000 people would die overall (COVID-19 has so far claimed more than 200,000 lives in the U.S.).

"They're gonna have to," Christie replied.

On Saturday, a viral tweet by Michael David Smith compared Christie's recent tweets with comments from that CNN interview.

"When other people got COVID-19, Chris Christie said some Americans are just gonna have to die," Smith wrote. "Now that he has COVID-19, he's checking himself into the hospital as soon as he feels even mild symptoms. When he said we have to accept people dying he didn't mean him. He meant us."

Dr. Eric Feigl-Ding, an epidemiologist, shared the tweet, adding: "Chris Christie is the biggest hypocrite." He has been contacted for additional comment.

Rachel Bitecofer, a senior advisor to political action committee The Lincoln Project, tweeted that Christie "endangered healthcare workers by being a COVID denier, refusing to mask, & encouraging many other New Jersians (& Americans) to do the same—making many more people get infected & putting our health care workers at more risk. He should apologize to them."

Michele Miller added: "Sad that ordinary folks don't have the option to check themselves into a hospital for 'mild symptoms.'"

On Friday morning, Christie told Good Morning America that he was among a group of "five or six people" who had helped the president prepare for Tuesday's presidential debate. "No one was wearing a mask in the room when we were prepping the president during that period of time," Christie said.