EXCLUSIVE: Leader Of 'white supremacist' Group Proud Boys Is The State Director Of Latinos for Trump With Close Ties To The GOP As He's Pictured With High-Profile Republicans Including The President's Son Don Jr., Roger Stone and Senator Ted Cruz 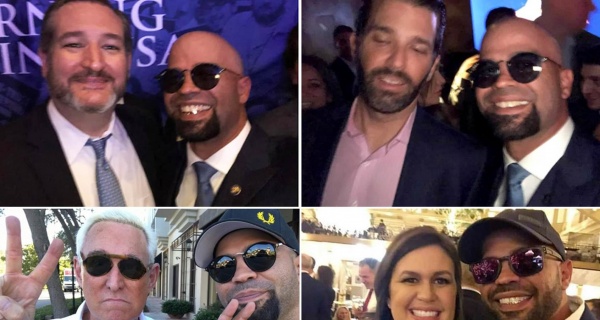 *Enrique Tarrio is serving as the Florida state director of the political support group Latinos for Trump, DailyMail.com can reveal

*Tarrio is the national chairman of the Proud Boys, the 'white supremacist' group who Donald Trump told to 'stand back and stand by' at Tuesday's debate

*DailyMail.com can reveal that Tarrio, is close to the Republican party having run for congress as a Republican earlier this year

*Tarrio, 36, has been pictured with Trump confidant Roger Stone who is a Proud Boys member, the president's son Don Jr, and GOP Senator Ted Cruz

*Tarrio posted a selfie of him and Donald Trump Jr. online with the caption: 'Blurry but at least we spoke about the rampant censorship of conservatives'.

The leader of the Proud Boys, the 'white supremacist' group at the center of the presidential debate furor, is a state director of Latinos for Trump and ran for Congress as a Republican, DailyMail.com can reveal.

Donald Trump told the Proud Boys to 'stand back and stand by' after he was asked to denounce their alleged white supremacist views during the presidential debate Tuesday night.

Afterwards Trump's son and spokesman both tried to downplay the comment, calling it a 'misspeak'. The president backpedaled on Wednesday telling reporters he had never heard of the group.

But DailyMail.com can reveal the Proud Boys national chairman, Enrique Tarrio, is close to the Republican party, having been pictured with the president's son Don Jr. and currently serving as the Florida state director of the political support group Latinos for Trump.

‘The individual you wrote about here is not affiliated with the Trump Campaign, our Latinos for Trump Coalition, or the Trump Family,’ the spokesman said. ‘He is also not the state director of our coalition and is not on our advisory board.’

Tarrio, 36, has been pictured with Trump confidant Roger Stone who is a Proud Boys member, the president's son Don Jr., Florida governor Rick Scott and senior Republican senator Ted Cruz, who co-sponsored a Senate resolution based on a petition written by Tarrio to designate the anarchist left-wing group Antifa as a 'domestic terrorist organization'.

Trump lent his support to the proposal, which ultimately failed, tweeting in August last year, 'Major consideration is being given to naming ANTIFA an 'ORGANIZATION OF TERROR'.'

Tarrio posted a selfie of him and Donald Trump Jr. online with the caption: 'Blurry but at least we spoke about the rampant censorship of conservatives'.

Tarrio was also caught on camera at the infamous 2017 white supremacist rally in Charlottesville, Virginia, wearing body armor and a badge with the insignia of the 'Fraternal Order of Alt-Knights', a paramilitary wing of the Proud Boys.

He claims he left before violence erupted at the march.

The business owner and Miami-born son of Cuban immigrants was promoted from president of his city's Proud Boys chapter to become the group's national chairman in November 2018.

Tarrio, who runs a security equipment firm, claims the Proud Boys has a 'similar atmosphere' to his Cuban upbringing and in a 2018 interview described his Miami chapter as 'a frat with a political lean.'

'My house, at like 7 o'clock in the morning, there's like 20 people in my house, talking about politics, roasting each other, just making fun of each other. I was brought up in that environment, so that kind of brings me into the f***ery that comes along with being a Proud Boy,' he said.

Despite supporting Trump's criticism of 'lawless' Democrat-run cities, as a younger man Tarrio had several run-ins with the law.

Tarrio has previously been banned from Twitter for breaking the site's rules on 'violent extremist groups'. He has slammed Twitter's decision and says he denounces hate and racism.

But Tarrio has posted messages on Proud Boys online groups including: 'This [website] to get filled up with Proud Boys, not no f**got a** photogs!' and 'B**ch n****r f**got tra**y. Stress test 3,' according to screenshots obtained by the Miami New Times.

He has also described transexual women as 'it' on Facebook, and posted a picture of Trump with the words 'grab her by the p**sy' and his own caption: 'Only way to grab it…..if you ask me.'

Other members have posted messages praising the Holocaust and mass murderers in their private group chats, the paper reported.

The Cuban-American, who ran as a Republican to represent Florida's 27th Congressional District this year but withdrew before the party's primary in August, said he wrote his slurs as a joke and to promote free speech.

'We are not a white-power group, and I am not a victim,' he told the New Times. 'I just think I should be able to say what I want and to express my support of Trump without being called a Nazi.'

The Proud Boys was originally started as a joke by Vice Media co-founder Gavin McInnes in 2016, naming it after the Aladdin song, 'Proud of Your Boy.'

The organization grew from gatherings of men in New York dive bars frustrated with politically correct culture, that 'usually consist of drinking, fighting, and reading aloud from Pat Buchanan's Death of the West,' according to McInnes.

As its numbers swelled to an estimated 6,000 members, the group became known for its 'Western chauvinism' – a mix of misogynist and anti-Muslim rhetoric, and for violent clashes with anti-fascist groups in New York and the Pacific North West.

In 2018 the FBI sent a warning to Washington police departments calling the Proud Boys an 'extremist group' that was recruiting in their areas and that members 'have contributed to the recent escalation of violence at political rallies held on college campuses, and in cities like Charlottesville, Virginia, Portland, Oregon, and Seattle, Washington.'

An Oregon bureau chief later backtracked, saying they did not mean to label the group as extremist, and a spokeswoman said, 'Our focus is not on membership in particular groups but on individuals who commit violence and criminal activity.'

But violence has followed the Proud Boys across the country for years.

Gay men's sex shops sell rubber and latex polo shirts in the style of Fred Perry shirts, some with the same color scheme of black with yellow stripes.

Seven members pleaded guilty to charges including riot, disorderly conduct, and attempted assault after fights broke out with protesters at a Proud Boys event in New York in 2018.

On Wednesday Portland Police arrested Proud Boys member Alan Swinney after he allegedly pulled a real gun on Black Lives Matter protesters, shot them with a paintball gun, and sprayed them with mace.

When Trump failed to denounce the group and instead told them to 'stand by' during the presidential debate on Tuesday, some Proud Boys members interpreted it as a rallying cry to fight Antifa, with others even making $40 t-shirts emblazoned with the phrase 'Proud Boys Standing By'.

The group's unofficial uniform is a black and yellow Fred Perry polo shirt.

Membership of the Proud Boys is reportedly broken into four degrees. Men become first degree members by simply declaring: 'I am a western chauvinist, and I refuse to apologize for creating the modern world,' – a pledge Roger Stone has made on camera.

To reach the second degree, members must demonstrate 'adrenaline control' in a bizarre ritual where they are beaten until they yell the names of five breakfast cereals.

Fourth-degree members suffer some hardship including being fired from their job for being a Proud Boy, being publicly 'doxxed' or identified as a member, or engaging in violence with Antifa.

After the rally, Kessler was expelled by then-president McInnes in an attempt to distance the group from white supremacism.

Though both McInnes and Tarrio have denounced racism, the former has a long history of incendiary public comments.

When a New York Press reporter asked him what he thought about his neighbors in his Williamsburg, New York, neighborhood in 2002, he said: 'Well, at least they're not n*****s or Puerto Ricans. At least they're white.'

On his show, McInnes has made several offensive comments including calling women 'dumb'. 'Maybe the reason I'm sexist is because women are dumb. No, I'm just kidding, ladies. But you do tend to not thrive in certain areas — like writing,' he said in 2017.

McInnes has also said 'Palestinians are stupid. Muslims are stupid. And the only thing they really respect is violence and being tough,' and has referred to transgender people as 'gender n*****s' and 'stupid lunatics.'

A spokesman for Tarrio released a statement Wednesday saying the Proud Boys has 'longstanding regulations prohibiting racist, white supremacist or violent activity' adding that 'we do not care what color you are or what your background is ... if you love America ... we consider you a brother.'

Tarrio himself later said Trump wasn't endorsing Proud Boys with what he said.

He told NBC Miami, 'He didn't condemn us. He didn't promote us either. What 'stand by' means is stand by me.'