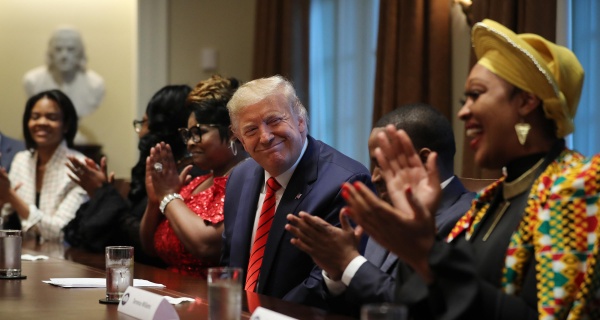 President Trump took to Atlanta, Ga. on Friday to unveil his plan for pandering to Black Americans in the 11th hour of the 2020 Elections.

According to the Atlanta Journal-Constitution, polls in Georgia show the race between Trump and Biden running essentially neck-to-neck. This tight face-off is likely what inspired the orange incumbent to gather a crowd of Black Republicans in Georgia this weekend and tell them, “Racial justice begins with Joe Biden’s retirement from public life,” and that Democrats, “only care about themselves, whatever that means.”

Within the so-called “Platinum Plan” for African Americans that Trump announced on Friday to woo people away from a potential Biden Administration, are proposals to make Juneteenth a federal holiday and to designate lynching as a national hate crime—neither of which are ideas that originated with the Trump Administration, as CNN reports.

The President spoke about the pillars of the plan in broad terms, saying, that among other proposals, he would be building up “peaceful” urban neighborhoods with the “highest standards” of policing, bringing fairness to the justice system, expanding school choice, increasing Black home ownership and creating a “national clemency project to right wrongful prosecutions and to pardon individuals who have reformed their (lives).”

The proposal borrows efforts from proposals by other Republicans, such as South Carolina Sen. Tim Scott, who played a vital role in the establishment of opportunity zones and remains the sole Black Republican in the Senate.

For example, Trump’s plan proposes making lynching a national hate crime. In 2019, Scott co-sponsored legislation to make lynching a hate crime alongside none other than California Democratic Sen. Kamala Harris, who is now the Democratic vice presidential nominee.

It’s pretty transparent and flimsy pandering, given that the President memorably chose Juneteenth weekend to host a rally in Tulsa for his band of white supremacists this summer, and has spent 2020 ratcheting up anti-Black racism on Twitter and with White House directives to silence any attempts to expand the narrative of America by recognizing the systematic oppression of Black Americans.

But Trump’s vague plans to supposedly pump $500 billion into Black businesses and communities if he is returned to the presidency was enough to excite the crowd of Black Republicans in Atlanta who gathered to show support for him in on Friday, and even started chanting for him to have 12 more years in office (after laughing with Trump at the idea that he will actually do the things he says he will).

Speaking of the willful idiocy of Black Republicans, it appears that gospel singer CeCe Winans may be one of the small percentage of melanated people aboard the MAGA boat.

News broke on Friday that Winans is participating in an upcoming tax-payer funded $300 million dollar campaign from the White House that will laud the Trump Administration’s response to COVID-19 and seek to combat “defeat despair” about the pandemic which has killed over 200,000 Americans.

The ad blitz, described in some budget documents as the “Covid-19 immediate surge public advertising and awareness campaign,” is expected to lean heavily on video interviews between administration officials and celebrities, who will discuss aspects of the coronavirus outbreak and address the Trump administration’s response to the crisis, according to six individuals with knowledge of the campaign who described its workings to POLITICO.

I’m hop-skipping across that sad list of ‘celebrity’ spokespersons to wonder at the wisdom, not to mention Christian decency, in throwing your name behind an administration that has proven over and over again that it doesn’t care about people’s lives—especially Black ones—and only cares about appearances.

Winans herself hopped on Twitter to answer (AKA side-step) the growing questions about why she was being a party to Trump’s mendacity, by saying she was asked to do an interview about COVID-19 by Black Trump lackey, Surgeon General Jerome Adams, in which she just stressed “how important it is for everyone to wear a mask.”

Though the president has consistently played politics with the idea that masks matter in the first place, the hatchet job the White House is doing with the coronavirus continues to rack up more lost lives, and we are weeks out from one of the most critical elections of our lifetime, Winans added that her participation in the ad was “not political at all.”