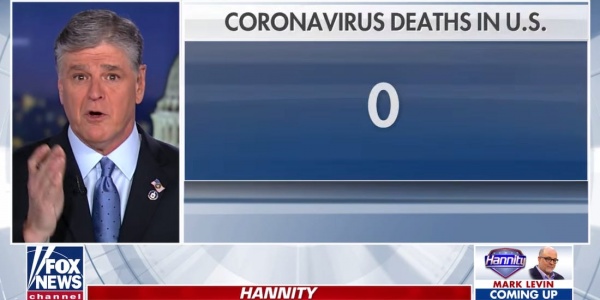 "Fox is complicit in spreading misinformation and lies about the virus itself and the recommended guidelines to fight it from public health experts and scientists," noted Rob Savillo of Media Matters for America.

As the United States passes the grim milestone of 200,000 Covid-19 deaths, Fox News continues to mostly ignore the ever-mounting death toll in favor of complaining about health measures meant to mitigate the pandemic's worst-case scenario.

So says a new report by the journalistic watchdog group Media Matters for America published on Tuesday which details how Fox News has complained about pandemic health measures nearly five times as often as it has reported the growing national death toll since September 1.

"Fox News personalities or guests have reported or mentioned the coronavirus national death toll or daily death rate in just 55 segments that were about the pandemic," said Rob Savillo, the report's author. "By contrast, they largely spent their time complaining about coronavirus health measures, attacking them in 260 such segments."

Fox's straight news programs performed better than its more vitriolic, ratings-driven opinion shows, with the former airing 48 segments reporting the death toll and 98 laden with complaints, or about a 2:1 ratio.

"More egregious were Fox's opinion shows, which reported the death toll in just seven segments, while complaining about health measures in a staggering 162 segments, more than 23 times as often," Savillo said.

To better illustrate what critics have called Fox News pandemic misinformation, Media Matters produced a three-and-a-half-minute video montage of popular pundits including Sean Hannity, Tucker Carlson, Laura Ingraham, and Jeanine Pirro and their guests short-shrifting the deadly virus even as the death toll continued to rise.

"In reality, multiple independent studies suggest that lockdowns saved millions of lives and prevented up to 60 million infections in the U.S., and scientists and medical experts agree that face masks are an effective barrier to the spread of the virus," said Savillo.

"As America crosses the line of 200,000 coronavirus deaths under an administration that has, at best, fumbled the federal response to a global pandemic of a scope that we've not seen in more than a century, Fox is complicit in spreading misinformation and lies about the virus itself and the recommended guidelines to fight it from public health experts and scientists," he added.

Critics say this is more than just irresponsible journalism and punditry. Fox's pandemic misinformation may have kept millions of Americans from taking the coronavirus threat seriously, as demonstrated by the surge in Covid-19 cases following the Sturgis Motorcyle Rally attended by hundreds of thousands of largely maskless, un-distanced people, campaign rallies for President Donald Trump, and other large gatherings.

"Downplaying the number of American lives claimed by this virus is also a key campaign strategy of President Donald Trump's reelection efforts," said Savillo. "By not reporting on the mounting death toll, Fox plays directly into this strategy and does another dangerous disservice to the viewing public."