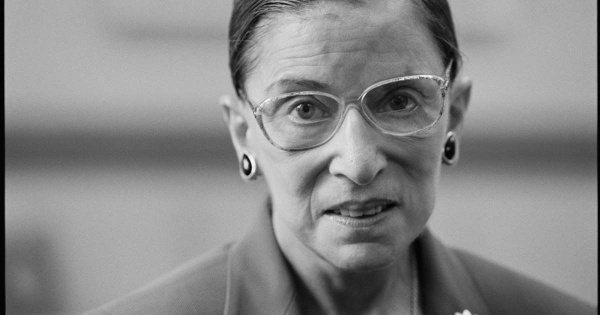 The moral imperative to save our democracy from minority rule could not be clearer.

The passing of Justice Ruth Bader-Ginsburg has left a deep hole in the hearts of millions across the country. She was a giant of jurisprudence, one of the most consequential Americans to have ever lived, and an inspiration to so many for her intellect, her moral center, her trailblazing biography, her resilience, and even her physical toughness.

But her passing also leaves a bleeding wound in American democracy, one that reinforces the crisis of legitimacy of conservative minority rule in America. It is a legitimacy crisis that Democrats must heal and rectify should they win power in November–especially if Republicans are shameless enough to force through a conservative to replace Bader-Ginsburg before the inauguration of the next president, against her dying wish. Democrats must, if they win, alter the composition of the Senate and the Court so that both reflect the will of the majority rather than the tyranny of a minority.

Consider the situation: a president who lost the popular vote by 3 million ballots has already stacked the lower courts and appointed two of the nine justices on the Supreme Court, shifting the balance of both the lower courts and the highest court in the land to the right, in the latter case by replacing a social moderate with a Federalist Society extremist. He was aided in doing so by Senate Majority Leader Mitch McConnell, who ruthlessly and without precedent refused to allow President Obama to nominate a replacement to Justice Scalia for the entire final year of his term. McConnell cynically argued at the time that the American people should be able to decide on who would sit on the Court, hedging his bets for an outcome favorable to conservatives. Improbably, he got his wish.

Notably, though, the people didn’t decide: the majority of the people voted for Hillary Clinton. Just as the majority of Americans didn’t vote for the Republican Senators who currently constitute the Senate majority: the GOP Senate “majority” represents only 153 million Americans, while the Democratic “minority” represents 168 million. McConnell, of course, doesn’t care. Asked if he would fill a Supreme Court vacancy in the final year of Trump’s term despite the rank hypocrisy of such a move, McConnell smirked and said “oh, we would fill it” to a laughing audience. It’s also worth stressing that another two of the Court’s justices were appointed by George W. Bush in 2005 and 2006, who also lost the popular vote during his first election, and was confirmed by a conservative Senate majority that also represented a minority of Americans.

Nor has the reality of minority rule tempered the extremism of the rulers. Rather than compromise under the recognition of their precarious legitimacy, Republicans have behaved as if were elected with smashing mandates. Worse, they have governed time and again in a way that shows they literally do not care if the Democratic constituents who make up the majority of America live or die. The GOP base, meanwhile, has demonstrated in its fervent and continued support for Trump that they share equally in their contempt for their left-leaning fellow citizens. They view any impingement on their right to minority rule as a form of totalitarian oppression.

There is no culture shift that Democrats can make to rectify this imbalance. No number of jovial cocktail dinners or backslapping lunches will convince QAnon-aligned conservatives to break bread and make compromises with Democrats on pressing crises like healthcare or climate change. No number of left-populist promises of Medicare for All, guaranteed jobs, and working-class solidarity will move those who believe that Black Lives is a violent conspiracy, that Bill Gates wants to implant them with microchips, or that climate change is a Soros-funded hoax. Nor has data shown that either approach pushes enough non-voters to the polls to create a sea change in the divided electorate. Change must be structural and permanent so that the incentives toward minority rule are ended, and so that Republicans will be forced to align their politics toward winning the favor of a majority of voters–including and especially the growing legion of Millennials, Generation Z, and people of color who increasingly comprise the electorate.

The most immediate steps Democrats must take are killing the filibuster, adding states to the union and expanding the courts.

The filibuster has historically helped conservatives far more than it has hurt them, and they know it. More importantly, in a country as divided along urban and rural lines as America is today and as polarized as the parties are, there is increasingly no way for either party to gain 60 Senate seats and no way for either party to govern to create real change as long as they fail to do so. Changing the composition of the courts, combined with executive orders, is almost the only change a ruling party can make. This leads to a dangerous sclerosis of the government and an incentive toward unitarian despotism in which executive orders increasingly become the sole functioning policy tool.

But the filibuster is also untenable morally. By 2040, under current trends only 30 percent of the Senate will be governing a full two-thirds of the American public. And that 30% is likely to be the most rural, most conservative 30%, while the two-thirds is likely to be in more urban, bluer states. This is a recipe for apartheid rule as long as 60 Senators are required for any legislative change. And yes: ending the filibuster carries downside risk should Republicans regain control of the White House, Senate, and House of Representatives in the future. But if voters do decide to send Republicans to power en masse in 2024 or beyond, then the people should get the government they voted for–and the legislators they support should be held accountable accordingly, rather than have their stances disguised through legislative gridlock.

The Senate should also be expanded by adding Washington, DC, and Puerto Rico to the union–at a minimum. It is appalling that the Washington, DC metro area has more people in it than some states and generates enormous economic activity, but has no effective representation in Congress. Puerto Ricans, meanwhile, are American citizens with all the responsibilities of citizenship but none of the representation. Assuming the residents of the island agree that they wish to become an American state, they should be allowed to do so. Republicans would call this a power grab, but it isn’t. Creating equal representation from a system of apartheid-style minority rule is not oppression, but justice. It’s also notable that the current make-up of states, including and especially the existence of a separate North and South Dakota, is due to an explicit 19th-century Republican power grab designed to alter the composition of the Senate. It’s worth noting that the Republicans of their day were mostly the good guys and the Dixiecrats the bad guys, but still: turnabout is fair play.

Finally and most controversially, Democrats must consider expanding the court–particularly if Bader-Ginsburg is replaced by a conservative. A federal court system in which the majority are appointees of popular-vote-losing presidents who then proceed to stymie all popular legislation enacted by a duly elected majority of legislators is both immoral and untenable. The balance must be rectified. There is nothing in the Constitution outlining the number of judges on any given court. Indeed, the Supreme Court has been expanded before.

Would this potentially create an arms race in which each unitarian majority government proceeded to expand the courts to govern however they please? Perhaps. But the danger to democracy and, frankly, to the country and the planet from allowing minority-rule theft of power to prevent any significant action on the country’s pressing problems would be far greater.

Other countries’ electoral systems can and do survive with more flexible, majoritarian electoral systems and power structures. America can survive, too. What it cannot survive is the status quo of structurally racist minority rule. The departure of Ruth Bader-Ginsburg is a focal point for desperately needed reforms, and it will fall on Democrats to act on them.