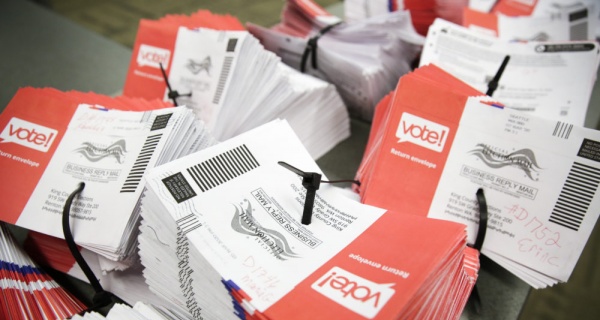 In every election, a small percentage of mail-in ballots get rejected. But this election is likely to have a whole lot of mail-in ballots. And in an election where a record number of voters are expected to cast their ballots by mail, you’re likely to hear a whole lot about ballots that don’t count, especially because voters of color have ballots rejected at a higher rate than white voters.

It’s already happening. In North Carolina, absentee ballots have already been sent back and the state has been updating statistics on those ballots daily. As of September 17, Black voters’ ballots are being rejected at more than four times the rate of white voters, according to the state’s numbers.1 Black voters have mailed in 13,747 ballots, with 642 rejected, or 4.7 percent. White voters have cast 60,954 mail-in ballots, with 681 — or 1.1 percent — rejected. In addition, 434 ballots cast by white voters and 127 ballots cast by Black voters were marked “spoiled,” which can mean literally spoiled or something as simple as a voter informing the election office that the address they had requested a ballot to is wrong. (These are a tiny portion of the votes from one state, so obviously we have a long way to go before we know the full landscape of ballot rejection rates.)

The vast majority of these ballots were rejected because voters made a mistake or failed to fill out the witness information,2 according to state records. A rejected ballot does not necessarily mean the voter is denied his or her vote: North Carolina allows for a process called “vote curing,” where voters are notified that there’s a mistake and given a chance to fix their ballot. But that’s not an option in every state: only 19 states currently allow some form of ballot curing. And even that isn’t foolproof. In Nevada’s statewide primary in June, for example, 12,366 ballots had a missing or mismatched signature, but even after voters were notified to fix it, only 45 percent were successfully cured.

Meanwhile, the racial gap in rejected ballots is not a problem unique to North Carolina.

Black voters and other voters of color frequently have their ballots rejected at a higher rate than white votes (so do younger voters, on average). In Florida’s 2018 midterm elections, ballots cast by Black voters, Hispanic voters and voters from other racial and ethnic minorities were rejected at twice the rate of ballots cast by white voters, according to a report from the Florida ACLU. A team of university researchers found a similar pattern in Georgia that year, where ballots from Black voters were rejected at a higher rate than those from white voters, even when accounting for county-level differences in rejection rates.

Part of this gap could be due to the fact that many Black voters and voters of color casting mail ballots are doing so for the first time, and first time vote-by-mail voters tend to make more mistakes because they’re less familiar with the requirements. That’s true in North Carolina, too. Michael Bitzer, a political scientist at Catawba College in North Carolina, compared historical voter records in the state and found that most voters who had their ballot rejected so far voted in person in 2016.

“We’re seeing already a lack of familiarity with the process, whether it’s signing the ballot or having the witness information completed,” Bitzer said. “There tends to be a greater number from voters who were previously in-person voters. If you look at the numbers [from Sept. 14], the ballots denied due to incomplete witness information, 55 percent of those voters had voted in person in 2016.”

That the barrier to entry is hitting voters of color harder than white voters is indicative of broader, systemic issues with enfranchisement.

“When there’s a barrier, it’s going to fall hardest on the most disadvantaged and disenfranchised in the community, which is very frequently going to be poor voters and voters of color,” said Myrna Pérez, the director of the voting rights and elections program at the Brennan Center for Justice.

Even if inexperience is largely to blame, that’s still a reason for concern since we’re expecting a record influx in mail-in voters this year. In North Carolina alone, 837,685 of the state’s 7.1 million voters have requested absentee ballots so far.