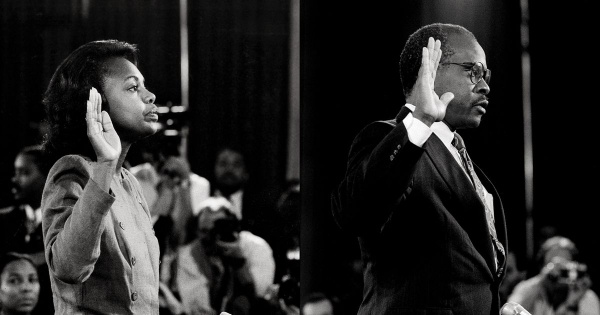 The president’s new list of Supreme Court candidates includes a half dozen former clerks of Justice Clarence Thomas, a reflection of the staunch conservative’s growing clout in the Trump era.

President Trump’s unveiling Wednesday of a list of 20 additional judicial prospects came less than eight weeks ahead of an election whose winner could nominate as many as three new justices over the next four years, radically altering the court’s ideological balance.

The strategy behind Trump’s announcement appeared aimed at energizing GOP voters and reassuring skeptics that he’s prepared to shore up the court’s unsteady 5-4 conservative majority with a slate of candidates cut from the same cloth as its most conservative members.

“The 20 additions I am announcing today would be jurists in the mold of Justices Antonin Scalia, Clarence Thomas, and Samuel Alito," Trump said during remarks in the Diplomatic Reception Room of the White House.

The records of Thomas and Alito, like the late Scalia, who died in 2016, are generally seen as falling to the right of the court's other conservatives: Chief Justice John Roberts and Trump’s two nominees, Justices Neil Gorsuch and Brett Kavanaugh.

Former Thomas clerks were reportedly involved in compiling the new list, according to The Washington Post, and the candidates include six of his former proteges. Among them is Gregory Katsas, who served as deputy White House counsel before Trump tapped him for the U.S. Court of Appeals for the D.C. Circuit.

If Trump is reelected, he could transform the Supreme Court into a conservative supermajority and push its ideological center to the right of Roberts, a George W. Bush appointee who some conservatives have come to view as a less-than-reliable ally.

Health concerns surround ailing liberal Justice Ruth Bader Ginsburg, 87, who is now facing her fifth bout with cancer, and fellow liberal Justice Stephen Breyer, 82, is seen as a possible departure from the bench. That has conservatives eyeing a commanding 6-3 or 7-2 majority.

The next oldest justice is conservative Clarence Thomas, 72, the longest-serving member of the current court and whose 28 years on the bench is longer than the typical justice’s tenure.

According to Thomas’s friends and colleagues, he has no plans to step down anytime soon.

Still, in the event of a surprise Thomas retirement, the ascendency of his former law clerks all but guarantees his influence will be felt for years — to the delight of conservatives and the chagrin of liberals. Under Trump, dozens of former Thomas clerks have been tapped for federal judgeships or hold political appointments.

Helgi Walker, a partner at Gibson Dunn and former Thomas clerk, said the George H.W. Bush appointee instills in his proteges an “unflinching commitment to the rule of law.”

“Justice Thomas teaches us, by his example, not only the importance of a principles-driven approach to the law but the larger imperative of sticking to those principles when the going gets tough,” said Walker, who worked on judicial selections as an associate White House counsel to former President George W. Bush.

"Justice Thomas is a strong contender for the title of most openly partisan Supreme Court justice, so it's no surprise that Donald Trump is continuing to elevate his acolytes, as he has done throughout his administration,” said Christopher Kang, chief counsel for the progressive judicial activist group Demand Justice.

“That should terrify anyone who cares about preserving the integrity of our courts,” he added.

During Wednesday’s announcement, Trump described his high court prospects as champions of conservative values, as well as defenders of its cherished ideals, which he portrayed as imperiled by Democrats.

Trump warned that religious liberty, freedom of speech and the right to bear arms are all at risk if Democrats win the White House in November, asserting that they would appoint “radical” justices.

“Over the next four years, America’s president will choose hundreds of federal judges and in all likelihood, one, two three and even four Supreme Court justices,” Trump said. “The outcome of these decisions will determine whether we hold fast to our nation’s founding principles or whether they are lost forever.”

The prominent place of Thomas clerks on Trump's list may provide a tonic of sorts for conservatives who sustained no shortage of disappointments during the Supreme Court’s most recent term.

The court blocked the Trump administration from ending an Obama-era program that shields nearly 700,000 young undocumented immigrants from deportation, extended anti-discrimination workplace protections to LGBT employees, and struck down a Louisiana abortion restriction.

Conservatives’ sense of defeat was compounded when Gorsuch and Kavanaugh joined the court’s liberal wing on several key votes, after their hard-won confirmation battles raised expectations that Republicans could expect reliably conservative outcomes.

But after sustaining a pair of landmark Supreme Court defeats in June, conservatives had begun describing the court in ever more urgent and even ghastly terms, with Trump calling the decisions “shotgun blasts into the face” of Republicans.

While Thomas’s jurisprudence will likely be carried on by his former clerks for years to come, Thomas himself signaled recently that he has unfinished business on the court, where he can wield his influence directly.

In the term that ended in July, Thomas expressed a willingness to expand Second Amendment rights outside the home, go further in breaking down the church-state barrier and even overturn one of his own prior rulings in order to rein in federal agencies.

“He's just warming up," Armstrong Williams, a close friend of Thomas, told The Hill near the end of court’s most recent term. "He still feels young, and there's a lot of work to do.”