Their Company Got a PPP Loan. So Why Are They Still Unemployed? 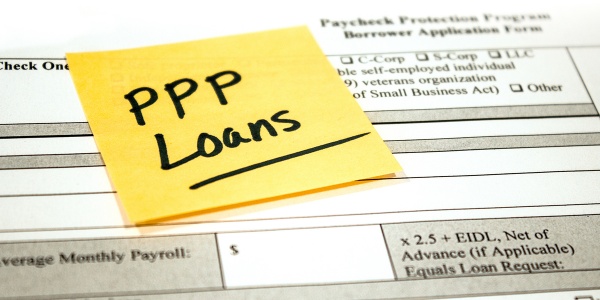 After 12 years of working as a housekeeper, Olga Castillo was laid off in March from the DoubleTree hotel in downtown Los Angeles, one of the millions of people put out of work by a pandemic that has hit the hospitality industry especially hard.

The 55-year-old mother who earned $20.90 per hour at the hotel now worries about how she will pay medical bills if she, her teenage daughter or her husband, a gardener, get infected by the coronavirus. The family does not have health insurance.

"I pray to God to be free of this virus," she said in Spanish.

After she was laid off, the owner of the DoubleTree hotel accepted a loan of between $1 million and $2 million from the federal Paycheck Protection Program, with the stated intention of retaining 176 jobs. But months after taking the money, the hotel doesn't seem to have anywhere near 176 employees. And Castillo — along with scores of her co-workers — is still waiting to be called back in.

The DoubleTree is owned by a subsidiary of Han's Holding Group, a Chinese firm with more than $4 billion in commercial and residential assets. The subsidiary, Han's Hospitality at 120 Downtown LA, received the PPP loan May 7. The hotel is operated by Aimbridge Hospitality, whose representatives did not return several emails and phone calls seeking comment. Han's Hospitality also could not be reached for comment.

While President Trump promoted the PPP as a tool for keeping workers employed, experts, academics, and union leaders say loopholes and flaws in the program allow businesses to accept millions of dollars in forgivable loans without retaining or recalling most of their workers.

The program requires loan recipients to use at least 60% of the money on payroll and lets employers wait until as late as December to spend that money on payroll. If the recipient doesn't follow the guidelines, the loan is no longer forgivable — but it converts to a low-interest loan that is much cheaper than loans offered from traditional lenders.

"It fell short, and there were structural issues that were flagged within the first weeks of it being signed,” said Marisabel Torres, director of California policy for the Center for Responsible Lending, a nonprofit research and advocacy group.

The PPP, which was part of the larger $2-trillion stimulus package, launched in April with $349 billion to issue in forgivable loans. Congress added $320 billion to the program later that month. The program ended Aug. 8 with more than $100 billion left unused.

Experts blame the program — not the loan recipients — for creating a situation in which employers could take the federal aid and leave many of their workers unemployed.

An early analysis of the program by S&P Global concluded that "more than 150 businesses that received hundreds of millions in PPP loans have announced plans to lay off thousands of employees, which is within the rules of the government program."

A report released Aug. 31 by the American Hotel and Lodging Assn. said that 4 out of 10 hotel employees are still out of work and that the leisure and hospitality industries have lost 4.3 million jobs since February. The study found that 36% of hotels have been unable to bring back any furloughed or laid-off workers.

In Southern California and Arizona, 25 hotels accepted between $28.9 million and $67.4 million in PPP loans, according to a study by Unite Here Local 11, a union that represents hospitality workers. (Federal data do not disclose the exact amount of each loan but instead, give a range of the amount approved.)

The union study found that the loan applications filed by the 25 hotels sought to preserve 3,431 jobs but as of June 20 the hotels employed only 620 union workers, down from 2,835 before the pandemic hit.

"The loophole with this program is that if companies don’t intend to apply for loan forgiveness, we believe they can spend the whole loan on nonpayroll costs, despite lawmakers’ intent to have these funds used for payroll," said Kurt Petersen, an organizer at Unite Here.

Among the problems noted by Petersen and other critics is that the PPP loans could be forgiven if the recipients used a minimum of 60% of the money on payroll. An earlier version of the program required 75% be spent on payroll; that rate was reduced in June at the request of business groups.

If the recipient does not use at least 60% of the money on payroll, the money becomes a loan with an interest rate of only 1% — much cheaper than a traditional Small Business Administration loan, whose interest rate can range from 5.5% to 8%. Depending on when the money was disbursed, the company gets two to five years to repay the PPP loan.

The program also lets companies wait until Dec. 31, 2020, to recall their workforce and still qualify for loan forgiveness.

Asked to comment on criticism of the PPP, a spokesman for the U.S. Treasury said in an email that the program was designed to "provide vital capital to small businesses to put Americans back to work" and that companies that don't comply with the requirements won't be eligible to have the loan forgiven.

Critics of the program say the rules made it too easy for companies to take the loans and leave their workers unemployed for months or permanently.

After eight years of working at the swanky Mr. C Beverly Hills hotel in L.A.'s Pico-Robertson neighborhood, Rosalia Rodriguez was laid off from her job as a minibar inspector in March when the pandemic pushed hotel demand to record lows.

The 52-year-old single mother who earned $19 per hour is now trying to make ends meet on unemployment checks and wondering how she can afford health insurance and to help her daughter start college at Cal State L.A. this year.

"I really want to go back,” Rodriguez said. "I put too much time and effort there.”

The hotel has remained open, and its owner, Morning View Hotels, accepted a PPP loan of between $1 million and $2 million in May with the intent to retain 127 jobs, according to federal data.

Omar Marquez, 42, who was laid off in March as a room inspector at Mr. C, said he also has not been called back and is struggling to make ends meet on unemployment benefits. The married father of two has looked for work but said the job market is "kinda dead."

"I'm in survival mode," he said. "Everything stops when you are terminated. All your plans for your future goals end."

Bob Ghassemieh, a representative for Morning View, declined to comment on the PPP loan his company accepted except to say that the money was "100% being used within the authorized guidelines of the program."

That's cold comfort to Marquez. "I know they are just taking advantage of these programs,” he said.

At the DoubleTree hotel, the owner applied for the federal loan on the premise that it would be used to retain 176 jobs. But union leaders say it doesn't appear that the money has yet been used to retain that many jobs.

Before the pandemic struck, the hotel employed more than 140 unionized workers, according to Unite Here Local 11, which represented them. Now it employs only 36, the union said. Because unionized workers tend to make up about 90% of hotel employees, union organizers say it is unlikely the DoubleTree has 176 workers on its payroll.

The program would have been more effective at keeping people employed if the money were issued directly to the workers, as has been done in response to the pandemic in several European countries, said Eileen Appelbaum, co-director of the Center for Economic and Policy Research think tank in Washington, D.C.

"It's not a well-designed program," she said. "There are better ways to do it."

Among the most cited problem of the PPP was that the money was doled out by the SBA through SBA-approved lenders.

Critics said they believe banks expedited the larger loans to their favorite clients because the banks earned fees on a sliding scale, ranging from 1% to 5% of the total amount.

Mom-and-pop businesses' applications for smaller loans were either ignored or pushed to the back of the line, critics say.

"From the start, the biggest issue was that smaller business didn’t have access," said Torres of the Center for Responsible Lending.

Several of the country's largest banks have defended their roles in the program, telling Forbes that they donated the fees they earned from the program to charitable causes.

Alexandra Merlino, financial director for CicLAvia, the Los Angeles nonprofit that organizes bicycling events to promote healthy transportation options, said her group tried but couldn't get a PPP loan through a large bank, which she declined to name.

Merlino said the group wanted a loan to cover the salaries of nine staffers for six weeks.

CicLAvia ultimately landed a PPP loan through a community development organization known for giving loans to low-income residents for home repairs and down payments.

"I think the program was set up for small groups like us, but banks that were in charge of issuing the money gave customers they have relationships with first access,” she said.

The program has some supporters, including David Shulman, a senior economist at the UCLA Anderson School of Management. He said he helped the preschool at his synagogue and his daughter's farm-to-table restaurant apply for PPP loans. In both cases, he said, the money helped rehire laid-off workers.

Still, Shulman acknowledges that the program had some deficiencies.

"You don't expect on the first time that you will have perfection," he said.