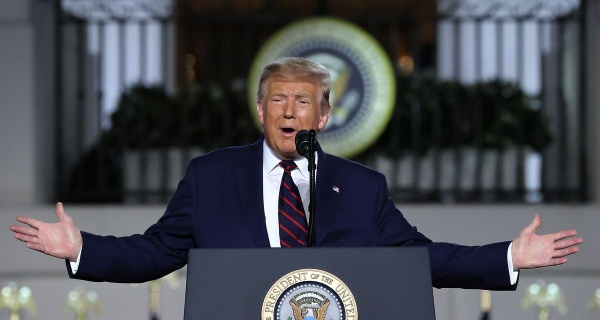 President Donald Trump on Thursday spoke for more than an hour at the Republican National Convention — giving him plenty of time to try to spin his presidency’s record positively and, it turns out, get a lot of things wrong.

CNN reporter Daniel Dale, who’s made a name for himself for fact-checking Trump, went on the network with a preliminary fact-check of the president — counting more than 20 false or misleading claims in Trump’s RNC speech, which would amount to one false or misleading claim about every three minutes. Dale proceeded to list those errors on the air, which took three minutes:

“This president is a serial liar, and he serially lied tonight,” Dale said.

Here’s the full list of errors, as recited by Dale:

2). “Trump claimed, as always, that he is the one who passed the veterans’ choice law. Barack Obama signed that into law in 2014. Trump signed a 2018 law to modify it.”

3). “Trump said, ‘I have done more for the African American community than any president since Abraham Lincoln.’ That is ludicrous. Lyndon Johnson, for one, signed the Civil Rights Act and the Voting Rights Act.”

4). “Trump again touted a ‘record 9 million job gain over the past three months.’ He didn’t mention, as usual, that that gain follows a record 22 million job loss over the previous two months.”

5). “He said he’ll ‘continue to lower drug prices.’ They’ve increased during his presidency.”

8). “He said he will always, and Republicans will always, strongly protect people with preexisting conditions. That pledge has already been broken. He and they have repeatedly tried to weaken those protections in Obamacare.”

9). “He claimed again that he banned travel from China and Europe. No, he imposed partial restrictions with many exemptions. Tens of thousands of people continued traveling over.”

10). “He boasted about the Covid testing system and about his general response. Look, experts nearly universally say the US was fatally slow in its response, especially slow in setting up adequate testing.”

11). “He said he ended what he called ‘a NAFTA nightmare’ and he signed a brand new US-Mexico-Canada agreement — the USMCA. That agreement preserves, maintains most of NAFTA.”

12). “He boasted about building about 300 miles of border wall. What he didn’t say is that most of that is replacement barrier. As of August 7, according to official data, just 5 miles had been built where none existed before.”

13). “He suggested Joe Biden would confiscate guns. That’s baseless. Biden is running on a non-mandatory buyback of so-called assault weapons.”

14). “He said Democrats want to defund the police. Biden, again, doesn’t, has rejected that.”

16). “He said Biden vowed to close down charter schools. Biden’s plan is skeptical on charters, but would not abolish them entirely.”

18). “He said Democrats twice removed the word ‘God’ from the Pledge of Allegiance at their convention. Two individual caucus meetings outside the main primetime programming did leave it out, but it was uttered in every primetime event.”

20). “He said he imposed an order to give 10 years in prison to rioters. That’s a maximum discretionary sentence up to judges, in existing laws. His order just asked the government to fully enforce.”

21). “He said Biden’s plan would eliminate America’s borders. No. Just no. It’s wrong.”

It’s quite the list, but this level of lying and misleading isn’t new to Trump. According to the Washington Post, Trump has now made more than 20,000 public false or misleading claims since he assumed office.

For the bull*******, however, all these bets are off: he is neither on the side of the true nor on the side of the false. His eye is not on the facts at all, as the eyes of the honest man and of the liar are, except insofar as they may be pertinent to his interest in getting away with what he says. He does not care whether the things he says describe reality correctly. He just picks them out, or makes them up, to suit his purpose.

It’s not just that Trump is lying. It’s that Trump doesn’t seem to care at all for the truth. What he says is only meant to make him look good. That’s the context in which Trump claims time and time again that he’s passed laws he never passed and built border walls he never built.

And so when the president speaks, it’s perpetually difficult to say if he’s telling the truth or merely reciting self-serving bull****.