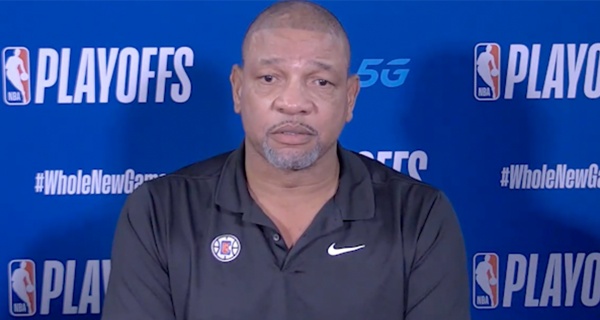 “It’s amazing why we keep loving this country, and this country does not love us back,” Rivers said.

The tears welled up in Doc Rivers’ eyes as he processed another police shooting of an unarmed Black man.

The Los Angeles Clippers’ coach became increasingly annoyed as he offered perspective as a Black person on Jacob Blake being shot seven times by police Sunday in Kenosha, Wisconsin.

So, to make his point more emphatic, Rivers took off his mask.

“What stands out to me is just watching the Republican convention and they are spewing this fear. All you hear is Donald Trump and all of them talking about fear,” Rivers said Tuesday following the Clippers’ 154-111 win over the Dallas Mavericks in Game 5 of their first-round playoff series.

Rivers’ voice cracked. He has experienced racism throughout his life, including when his San Antonio home was burned down in a racially-motivated arson attack. The 58-year-old former player has become one of the NBA’s most outspoken coaches on systemic racism, police brutality, voting reforms, and Trump’s racially divisive rhetoric.

As much as he expressed frustration for addressing yet another incident involving law enforcement shooting an unarmed Black person, Rivers continued to speak out.

First, he outlined how to hold law enforcement accountable.

“The training has to change in the police force. The unions have to be taken down in the police force,” Rivers said. “My dad was a cop. I believe in good cops. We’re not trying to defund the police and take all of their money away. We’re trying to get them to protect us just like they protect everybody else.”

Second, Rivers called on everyone to watch the video that showed Kenosha police shooting Blake seven times as he attempted to go to his car after they followed up on a domestic disturbance.

“When you watch that video, it’s sickening. It’s sickening. You know his kids were there. How do they ever get that out of their mind. How will those kids ever be normal?” Rivers asked. “If you watch that video, you don’t need to be Black to be outraged. You need to be American and outraged. How dare the Republicans talk about fear. We’re the ones that need to be scared. We’re the ones that have to talk to every Black child. What white father has to give his son a talk about being careful if you get pulled over. It’s just ridiculous. It keeps going. There’s no charges. Breonna Taylor, nothing.”

Third, Rivers called on the government to respond to protests equally.

“We protest and they send riot guards. They send people in riot outfits. They go to Michigan with guns and are spitting on cops, and nothing happens,” Rivers said. “All we’re asking is you live up to the Constitution. That’s all we’re asking for everybody.”

Clippers forward Paul George waited until after the game to watch the video of Blake’s shooting.

Players on the Toronto Raptors had considered boycotting the resumption of the NBA season. Mavericks coach Rick Carlisle, who is the head of the NBA Coaches Association, had direct talks with the National Basketball Players Association about using the league’s platform to address systemic racism shortly after a white police officer killed unarmed Black man George Floyd.

“This really happened because it was an opportunity to play the game we love. It was a platform to really talk about things that had been going on,” Carlisle said. “The importance of basketball is so far down the list of things when you consider the events of the last several months and the events throughout history.”

Rivers would agree, obviously. Nonetheless, he strongly remains in favor of the NBA continuing its season for the same reason the Clippers competed in the 2014 NBA playoffs following the release of audio showing then-Clippers owner Donald Sterling sharing racist views.

“When we were little kids and we were in the backyard by ourselves with dreams about winning a championship, Donald Sterling was not in our dreams. And neither were these cops. So they are not going to take anybody. They are not taking any people’s dreams away,” Rivers said. “I think you always play. We can fight for justice. But we should still do our jobs. I really believe that. By doing our jobs, people are seeing excellence from [Black] Americans and white Americans. I would still do my job. That’s just my opinion. But if my players told me no, it would be no.”

Clippers guard Lou Williams was among a handful of players that considered skipping the season out of social justice concerns. He then said the team collectively voted otherwise after having varying conversations.

“We’re asking for hope,” George said. “For a lot of Black Americans, we’re hoping to see the next day. It is what it is. Hope is the biggest part of all of this.”