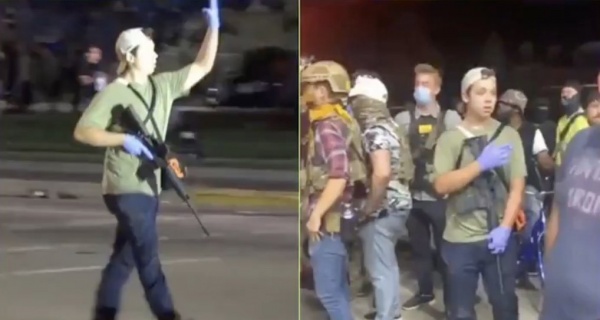 Kyle Rittenhouse, the 17-year-old charged with shooting three people — two of them fatally — during a Kenosha protest Tuesday evening, thought of himself as a militia member trying to protect life and property, according to videos, interviews and social media posts.

Video shot in the hours before the shooting shows Rittenhouse, who introduced himself as Kyle, hanging out with older armed men. They say they're protecting a car lot.

Rittenhouse, of Antioch, Ill., also did a video interview with the Daily Caller in front of a boarded-up building.

"People are getting injured and our job is to protect this business," Rittenhouse says in the clip. "And my job also is to protect people. If someone is hurt, I’m running into harm’s way. That’s why I have my rifle; I’ve gotta' protect myself, obviously. But I also have my med kit."

Earlier Tuesday, a local militia known as the Kenosha Guard created a Facebook event called “Armed Citizens to Protect our Lives and Property.” The invite was picked up by the far-right website Infowars.

“As you know I am the commander of the Kenosha Guard, a local militia. We are mobilizing tonight and have about 3,000 RSVP’s. Our effort has made the national media. I ask that you do NOT have your officers tell us to go home under threat of arrest as you have in the past. We are willing to talk to KPD and open a discussion. It is evident that no matter how many Officers, deputies, and other law enforcement officers that are here, you will still be outnumbered.”

At a news conference Wednesday, Miskinis said he didn't know what group Rittenhouse was part of. He wouldn’t comment on the circumstances leading up Tuesday night's shootings, saying the investigation was too new.

'We appreciate you guys'

In another video clip, Rittenhouse appears with members of the armed group shown earlier, getting bottles of water from a law enforcement officer in an armored vehicle. The officer thanks the armed men for their help, though they are clearly civilians in violation of the city's 8 p.m. curfew.

“We appreciate you guys,” the officer says. “We really do.”

Asked about that interaction during the news conference, Miskins said, "I don’t have any information that that existed."

Kenosha County Sheriff David Beth, who appeared at the same event, said deputies would toss water to anyone.

"If someone came walking past, I don't care if they're a protester or who they are, they would pass water," he said. "We have cases. People have come to our command posts... . We have pallets of water and Gatorade."

Beth, too, had been asked to cooperate with the Kenosha militiamen but declined, he said.

"Yesterday I had a person call me and say, 'Why don’t you deputize citizens who have guns to come out and patrol the city of Kenosha?' And I’m like, ‘Oh Hell, no.’ What happened last night is the perfect reason why I wouldn’t," Beth said. "The incident that happened last night where two people lost their lives were part of this group that wanted me to deputize them."

According to Rittenhouse's Facebook page, which has since been taken down, he is a strong supporter of police. His page featured pictures of badges with black bands across them, which police wear when a fellow officer is killed. An image of Rittenhouse and another man is framed in a blue circle that contains the words, duty, honor, courage, and "Blue lives matter."

Rittenhouse also was shown in a photo of participants in the Grayslake, Lindenhurst, Hainesville Public Safety Cadet program. The website for that group, also removed from view Wednesday, said cadets, who are between the ages of 14 and 20, are schooled in police procedures including traffic stops, crash investigations, firearms, domestic disputes, and crime scene investigation.

Among the armed men in the streets Tuesday was former Kenosha Ald. Kevin Mathewson, who is active in the Kenosha Guard. Mathewson posted a video selfie of the scene near the Kenosha government center Tuesday night. He did not return a phone message Wednesday.

Before the Kenosha Guard Facebook page was taken down Wednesday, a post there suggested the shootings were not connected to its activity.

"We are unaware if the armed citizen was answering the Kenosha Guard Militia’s call to arms," it said. "Just like with the shooting of Jacob Blake, we need all the facts and evidence to come out before we make a judgment. God Bless and stay safe Kenosha!"

The post prompted a flood of replies, many in support of Rittenhouse, suggesting the victims deserved it for looting and vandalism or that the shooter acted in self-defense.

But others were critical of the Kenosha Guard, accusing the group of instigating Rittenhouse's involvement, whether or not he was a formal member.

"Shame on you Kenosha guard. You allowed a 17-year-old to join you from out state and now he may pay for those mistakes for the rest of his life in a prison cell. SHAME ON YOU!!!!!," wrote one woman.

Another militia group, called the boogaloo, also attended all three nights of protests in Kenosha so far, according to Justin Mishler, a self-proclaimed member who lives Belvidere, Illinois.

About a dozen armed boogaloo members were at the Kenosha protests Sunday, about two dozen Monday and more Tuesday, he said. Their purpose was providing security and protection for businesses, he said.

Mishler said the Kenosha Guard is not affiliated with boogaloo.

"It sounds like a group that's probably a day old or less,” he said, adding that neither he nor fellow boogaloo boys know Rittenhouse.

"He's not one of us," Mishler said of Rittenhouse.