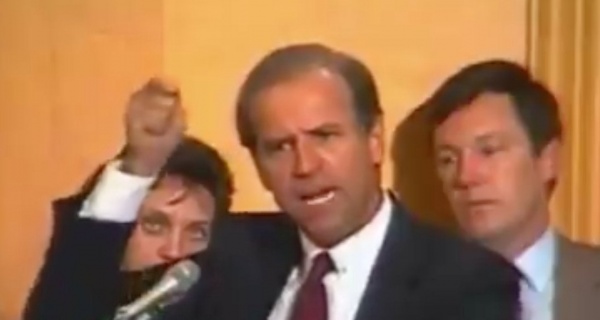 The clip, taken from C-Span coverage of a Senate committee in 1986, shows Mr Biden passionately speaking out in support of the majority black population of South Africa, and against the oppressive apartheid regime.

Challenging Reagan administration secretary of state George Schultz on government policy towards South Africa, Senator Biden says he is disturbed by the rationale behind it, arguing that it amounts to doing nothing.

Senator Biden describes the apartheid government as “repulsive” and “repugnant”, and how the black population is forced to take up arms after years of oppression.

“They’ve tried everything for the last 20 years. They beg, they borrowed, they crawled. And now they’re taking up arms.”

He demands to know what the US’s timetable is for a regime that is crushing its people. In a longer clip, he asks whether the US is giving the regime 20 days, 20 months, or 20 years as a timetable for peace.

Reading from the policy document Mr Biden says that the US is calling on black South Africans to avoid a descent into violence, terrorism, and extremism, to demonstrate they understand the need for compromise.

“Hell, they’ve tried to compromise for twenty years. They’ve tried everything. Everything in their power! And look what’s happened to them,” he comments.

Mr Schultz says that he hates to hear a Senator of the United States calling for violence, which Mr Biden stridently denies.

He replies: “I hate to hear an administration and a secretary fo state refusing to act on a morally abhorrent point … I am ashamed of this country [that] puts out a policy that says nothing, nothing. It says: continue the same. We put no timetable on it. We make no specific demands. We don’t set it down.”

Secretary Schultz was testifying about the possibility of sanctions against South Africa. President Ronald Reagan had introduced sanctions the previous year that many believed did not go far enough.

The following month, the Senate passed the Anti-Apartheid Act, which was subsequently vetoed by the president, who accused it of being economic warfare that would lead to more civil strife

In a relatively rare move, the veto was overridden by Congress, and South Africa was sanctioned by the US until the end of apartheid.