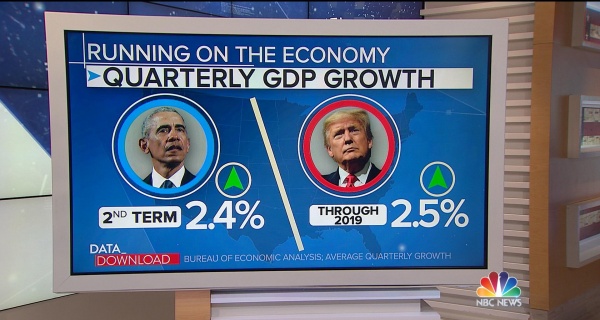 The average quarterly economic growth under Trump, 2.5 percent, was almost exactly what it was under Obama in the second term, 2.4 percent.

President Donald Trump’s campaign speeches can careen into many topics, but his primary appeal continues to be that he built “the greatest economy that we've had in our history” before the COVID-19 pandemic and he can do it again. The latest NBC News/Wall Street Journal poll shows he has an edge with voters on that issue and the Trump economy is likely to be a big topic this week at the Republican convention.

But the real story of the Trump economy, and the president’s role in building it, is not so simple. If you compare key economic indicators from Barack Obama’s second term in office to the first three years of Trump’s time (that is, before the pandemic hit), the data show a continuation of trends, not a dramatic shift. It suggests Trump didn’t build something new; rather he inherited a pretty good situation.

Start with the broadest measure of economic health, gross domestic product. In 2016, Trump said he was unhappy that the country’s economic growth rate was under 3 percent a year. Trump said he thought the economy could grow at a better-than-4-percent annual rate.

But the numbers show that average quarterly economic growth under Trump, 2.5 percent, was almost exactly what it was under Obama in the second term, 2.4 percent.

Other than the overall similarity, two things jump out of those numbers. First, Trump didn’t get near his 4 percent figure. Second, the growth that began in Obama’s second term and essentially continued under Trump was enough to create an economy that even Trump believes was great. In other words, there might be something to be said for slow-steady growth over a prolonged period of time.

Job numbers for Obama and Trump show a similar story.

The president rightly takes credit for having low unemployment during his presidency. In December of 2019, the unemployment rate was a scant 3.5 percent, the lowest it had been in 50 years.

However, as good as that number was, when Trump took office the rate was already at 4.7 percent. That figure is quite low by historical standards (lower than all of the 1980s as well as most of the 1990s and 2000s). In December of 2017, it was the lowest the number had been since the Great Recession. In fact, Obama saw a much steeper drop in unemployment in his second term, a 3.3 drop in the rate, than Trump did in his first three years, a decline of 1.2 points.

That’s not to besmirch the remarkably low unemployment under Trump, but it’s hard to ignore that the unemployment track under Obama had been downward. Again, the numbers look like the continuation of a trend, not something new.

And the job creation numbers show more evidence for that view.

On average, there were more jobs added monthly in Barack Obama’s second term than there were in Trump's first three years.

On average, the country created 215,000 new jobs a month in Obama’s second term. In Trump’s first three years, the figure was 182,000. They are both good numbers and if you look at the jobs data plotted on a graph, the rise since 2011 actually looks pretty consistent.

But that’s the point. Since the recovery from the last recession, the numbers look like a slow, steady build. There is no sudden change when Trump takes office in 2017. There was nothing dramatic in the post-2011 job figures until the pandemic hit this spring.

There is one big indicator that suggests a change under Trump, the rise in the stock market. The Dow Jones Industrial Average in particular took off when he won the presidency.

To be clear, Obama’s figures were not bad on this measure. From his second Election Day until 2016, the Dow climbed 38 percent. But Trump can rightfully brag about that climb and this week the DJIA has recovered most of what it lost in 2020.

The real question is: How important is the Dow to the overall health of the economy? Other lingering problems, such as continued high unemployment and a projected drop in GDP for the year, only emphasize how that one measure doesn’t come close to telling the whole story of the economy.

A president taking credit for the economy is nothing new, of course. It’s a time-honored tradition in politics. And there are parts of the economy that Trump can rightfully celebrate. But the idea that the president somehow rescued a nation that was struggling economically when he arrived simply isn’t borne out in the data.

If Trump is re-elected, he would not be rebuilding the economy again; he would be taking on a new task he did not face when he first arrived in Washington. He might be the right person for that job, but there is little evidence in his record as president that says he is.