From Paul Manafort to Steve Bannon, a Brief History of MAGA Money-Grubbing 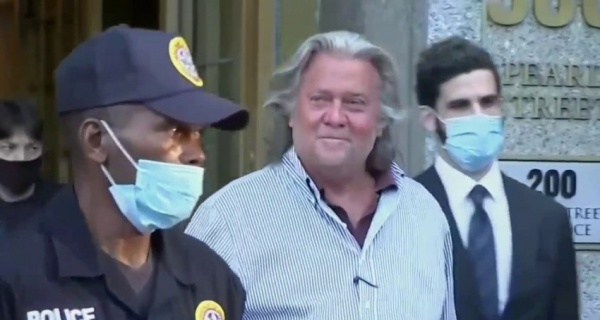 The alleged corruption surrounding We Build the Wall, Inc., is just the latest chapter in a saga of suspect fund-raising efforts surrounding Donald Trump.

Four years ago Thursday, Paul Manafort resigned as Donald Trump’s 2016 campaign manager, just days after the New York Times reported that ledgers discovered in Kiev indicated that the veteran Republican political consultant and influence peddler had received $12.7 million in cash payments from a pro-Russian party controlled by Ukraine’s former leader, Viktor Yanukovych. Eric Trump told Fox News that his father didn’t want the “distraction” of Manafort’s troubles looming over his White House bid. To replace Manafort, Trump appointed Kellyanne Conway as manager of his campaign, and Steve Bannon, the right-wing media provocateur, who was then head of Breitbart News, as the campaign’s chief executive.

Today, Manafort is a convicted felon. He is currently in home confinement, serving a seven-year sentence for tax fraud and conspiracy, witness tampering, and foreign-lobbying violations. In May, the Bureau of Prisons released him from a federal prison in Florida, because of health concerns related to the coronavirus. Earlier this week, he returned to the news when a Senate Intelligence Committee report on Russian meddling in the 2016 election described him as a “grave counterintelligence threat,” partly because one of his longtime business partners was, in fact, a Russian intelligence officer.

Bannon isn’t in prison, but he is facing accusations of fraud and money laundering that could land him in the slammer for up to forty years. On Thursday, federal agents arrested him on a luxury motor yacht docked off Westbrook, Connecticut. Later in the day, he appeared handcuffed in a Manhattan court, where he pleaded not guilty to charges that he and three other men had covertly diverted millions of dollars that had been donated to an online GoFundMe campaign supposedly meant to fund construction of Trump’s wall across the southern border. A judge released Bannon on a five-million-dollar bond, ordering him to say away from yachts and private jets.

The most remarkable thing about the indictment that the Southern District of New York unsealed on Thursday is how grubby the wrongdoing it alleges is. For years, Bannon, who started out as a Naval officer and Goldman Sachs investment banker, has been promoting himself as a right-populist thought leader, a man deeply interested in history, philosophy, and economic supply chains, as well as the nefarious business of day-to-day politicking, and putting the screws to Democrats. If the charges contained in the Southern District’s complaint are true, the would-be philosopher king is just another grifter looking to exploit Trump supporters for his own financial benefit.

Manafort, who, along with Roger Stone and Charles Black, virtually invented the business of lobbying in Washington for rancid foreign governments, was a grifter too, of course. To give him his due, though—or perhaps more than his due—he didn’t try to portray his money-grubbing as part of a broader political cause. Even his involvement in the Trump campaign seemed to be largely a business arrangement—or perhaps a service to some of his East European benefactors, from whom he was seeking payments that he believed he was owed. Days after his appointment to the campaign, he e-mailed a colleague in Kiev: “How do we use to get whole?”

Bannon was different. During the Trump campaign, he portrayed himself, and Trump, as defenders of an American working class, which had been sacrificed on the altar of globalization. After being booted from the Trump White House, in August, 2017, at least in part for making critical comments about the Administration to journalists, he expanded his ambitions to Europe, where he sought to build a network of far-right parties. (He didn’t get far.) He also teamed up with an exiled Chinese billionaire, Guo Wengui, to press for regime change in China. (According to news reports, the yacht that Bannon was arrested on belongs to Guo.) He also continued to agitate in this country, putting out a regular podcast, which morphed from “War Room: Impeachment” to “War Room: Pandemic.”

The indictment from the Southern District provides a window into some of Bannon’s less visible activities. In December, 2018, it recounts, Brian Kolfage, an Air Force veteran, triple amputee, and Trump supporter, set up a GoFundMe page that was originally called “We the People Build the Wall.” As Congress had frustrated Trump’s designs, the campaign attracted a lot of attention from the conservative media, and money poured in. According to the indictment, the GoFundMe page quickly raised about twenty million dollars from hundreds of thousands of different donors. (Ultimately, it raised about twenty-five million dollars.)

Concerns arose about Kolfage’s background and how the money would be used to build the wall. According to the indictment, the crowdfunding Web site told Kolfage that, unless he could identify a legitimate nonprofit organization that would receive the funds raised, the site would return the money to the donors. The indictment goes on to describe how Bannon and another right-wing activist, a venture capitalist named Andrew Badolato, got involved with Kolfage and “took significant control of the fundraising campaign’s organization and day-to-day activities, including its financing, messaging, donor outreach and general operations.” More specifically, working with Kolfage, they set up a new Section 501(c)(4) not-for-profit, We Build the Wall, Inc., “to which they proposed that the money that had been raised by ‘We the People Build the Wall’ could be transferred.”

Having navigated this obstacle, the alleged conspirators set out to raise more money. To this end, they promised potential donors that a hundred percent of the cash donated would go directly to the construction project, with neither Kolfage nor anyone else taking a cut. “These representations were false,” the indictment states. “KOLFAGE covertly took more than $350,000 in funds that had been donated to We Build the Wall for his personal use, while BANNON, through a non-profit organization under his control, received over $1,000,000 from We Build the Wall, which BANNON used to, among other things, secretly pay KOLFAGE and to cover hundreds of thousands of dollars in BANNON’s personal expenses.” Among the items that the defendants spent the money on were “travel, hotels, consumer goods, and personal credit card debts,” the indictment says.

The prosecutors also allege that the defendants tried to disguise the payments they received by routing some of them through a shell company under the control of Timothy Shea. They further claim that, in late 2019, after the defendants discovered that We Build the Wall was under criminal investigation, they “took additional steps to conceal the fraudulent scheme detailed above,” including using encrypted-messaging services and removing from the fund-raising campaign’s Web site the claim that Kolfage wasn’t being compensated. A press release stated that the four defendants were “each charged with one count of conspiracy to commit wire fraud and one count of conspiracy to commit money laundering, each of which carries a maximum penalty of twenty years in prison.”

In a move as predictable as the sun rising in the east, Trump quickly sought to distance himself from the We Build the Wall group, and from Bannon. Even for a dissembler as practiced as he is, though, this was a tough sell. In July of last year, the President’s son, Donald, Jr., appeared at a fund-raising event for the group, alongside Bannon and various other right-wing activists. On Thursday, the Trump Organization issued a statement claiming that Donald, Jr.,’s “previous praise of the group was based on what he was led to believe about their supposed intention to help build the wall on our southern border and if he and others were deceived, the group deserves to be held accountable for their actions.”

There is an even more direct link between We Build the Wall and Trump. In January of last year, Kris Kobach, the former Kansas secretary of state, who served on the group’s advisory council, told the New York Times that Trump had given it his personal seal of approval. “I talked with the president, and the ‘We Build the Wall Effort’ came up,” Kobach told a reporter. “The president said ‘the project has my blessing, and you can tell the media that.’ ”

This isn’t the first time that questions have arisen over fund-raising efforts connected to Trump, of course, or that investigators from the Southern District have taken an interest in them. In 2018, they launched an investigation into whether Trump’s inaugural committee misspent some of the hundred and seven million dollars it had raised, mostly from wealthy donors. The Wall Street Journal reported that the investigation arose from materials that the feds had seized from Michael Cohen, Trump’s personal lawyer, who eventually pleaded guilty to tax evasion and campaign-finance violations. In February, 2019, the prosecutors issued a subpoena to the inaugural committee. It isn’t clear what has happened with the investigation since.

Trump’s reëlection campaign, which has raised hundreds of millions of dollars, has also attracted scrutiny. In May of this year, HuffPost reported that the campaign had paid out vast sums to some of its top staff, particularly the campaign manager at the time, Brad Parscale. Based on an analysis of federal filings, HuffPost’s S.V. Dáte found that, between January, 2017, and March, 2020, companies controlled by Parscale collected $38.9 million from the campaign. Dáte wrote:

For Parscale, who just a few years ago was designing websites in San Antonio for Trump’s properties, among other clients, the sudden wealth has afforded him a $2.4 million waterfront house in Fort Lauderdale, Florida, a pair of million-dollar condos, a brand new $400,000 boat, and another half-million-dollar in luxury cars, including a Range Rover and a Ferrari.

Parscale isn’t the only Trump associate to benefit from the campaign’s largesse. In February, 2019, ABC News, citing campaign-finance records, reported that the campaign “has spent nearly $100,000 of donor money to pay legal bills to the firm representing Jared Kushner.” A spokesman for Kushner’s attorney told ABC News that the legal work “was performed on behalf of the Trump campaign to assist them in defending against a baseless and political case brought by the DNC,” and claimed Kushner “has personally paid all of his separate legal fees to date.”

Most of the money given to We Build the Wall—and to the Trump reëlection campaign, so far—has come in the form of modest sums, which were presumably donated, in the main, by people of modest means. An obvious question is: At what point will Trump’s supporters come to understand that the maga movement is, for the people organizing and leading it, largely a money-making scam? Sadly, the answer may be never.