Another Warning From The 1918 Flu For COVID-19: ‘Survival Does Not Mean That Individuals Fully Recovered’ 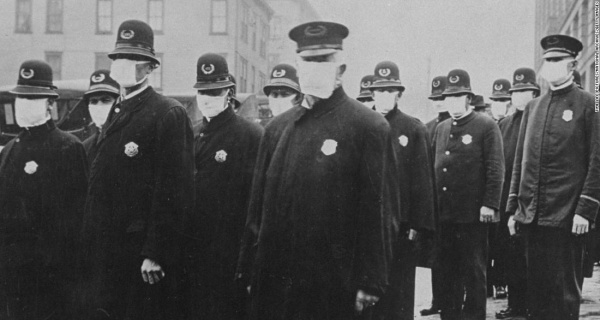 ‘We may never know the true mortality consequences of 1918 because of incomplete or inaccurate record-keeping, issues that also undermine our ability to quantify the impact of COVID-19’

There’s still so much we don’t know.

The 2020 coronavirus and 1918 influenza are two highly contagious respiratory diseases that spread around the world in months, and lacked a vaccine when they first occurred. People couldn’t understand why they affected some people more than others. For the 1918 flu, healthier, younger people were most at risk. In 2020, it’s older people with preexisting conditions.

But there is one cautionary note from the 1918 flu that has resonance in 2020, and it could reinvigorate social-distancing and mask-wearing behavior among those people who are feeling the fatigue of disruption to their daily lives: “While 1918 was deadly, most that contracted the virus survived. But survival does not mean that individuals fully recovered.”

That’s according to a review of literature and studies on the 1918 flu by economists at Vanderbilt University in Nashville, Oberlin College in Oberlin, Ohio, and Carnegie Mellon University in Pittsburgh. “The evidence suggests that, in 1918, those that survived the initial infection faced an elevated mortality risk and some physiological conditions never fully healed.”

“The first lesson from 1918 is that the health effects were large and diffuse. We may never know the true mortality consequences of 1918 because of incomplete or inaccurate record-keeping, issues that also undermine our ability to quantify the impact of COVID-19,” they wrote. “The range of lingering health effects for those that contract COVID-19 and survive remains to be seen.”

SARS-CoV-1 in 2003 may provide more clues to what some patients can expect in 2020. This two-year study in the journal Respirology of a selected population published in 2010 of SARS survivors “showed significant impairment” of diffusing capacity for carbon monoxide or lung function, exercise capacity and health status with a more significant adverse impact for health-care workers.

A separate 2009 analysis of patients in Hong Kong in the aftermath of SARS-CoV-1 found that “psychiatric morbidities” (including anxiety and depression) and chronic fatigue among up to 40% survivors almost four years after falling ill. They recommended more long-term, public-health mental-health strategies to deal with the aftermath of such epidemics or pandemics.

And SARS-CoV-2? A recent study of 60 COVID-19 patients published in the peer-reviewed medical journal Lancet this month found that 55% of patients in one study were still displaying neurological symptoms during follow-up visits three months later, including confusion and difficulty concentrating, as well as headaches, loss of taste and/or smell, mood changes and insomnia.

Some 500 million people, or one-third of the world’s population, became infected with the 1918 “Spanish flu.” An estimated 50 million people died worldwide, with about 675,000 deaths occurring in the U.S., according to the Centers for Disease Control and Prevention. COVID-19 has now killed at least 781,932 people worldwide, and 171,877 in the U.S., Johns Hopkins University says.

As of Wednesday, the U.S. still has the world’s highest number of COVID-19 cases (5,486,232). Worldwide, there has been at least 22,179,934 confirmed cases, which mostly does not account for asymptomatic cases. COVID-19 attacks the respiratory system, but doctors say it also affects the cardiovascular system, causing blood clots among some patients, and impacts organs.

A review of cases published last March in the medical journal JAMA Cardiology concluded: “Coronavirus disease 2019 is associated with a high inflammatory burden that can induce vascular inflammation, myocarditis, and cardiac arrhythmias.” It added, “Cardiovascular risk factors and conditions should be judiciously controlled per evidence-based guidelines.”

COVID-19 may induce new cardiac issues and/or exacerbate underlying ones, the researchers said. “During most influenza epidemics, more patients die of cardiovascular causes than pneumonia-influenza causes. Given the high inflammatory burden of COVID-19, and based on early clinical reports, significant cardiovascular complications with COVID-19 infection are expected.”

During the 1918 influenza pandemic as with COVID-19, wealthier people had a better chance of survival: Individuals of moderate and higher economic status had a mortality rate of 0.38%, versus 0.52% for those of lower economic status and 1% for those who were “very poor,” economists Brian Beach, Karen Clay, and Martin Saavedra wrote in the paper published this week.

“Compared to individuals who lived in one-room apartments, individuals who lived in two-room, three-room, and four-room apartments had 34%, 41%, and 56% lower mortality, respectively,” they added. In 2020, multigenerational households have also faced similar challenges, especially those with elderly inhabitants and younger people who show no symptoms of the virus, experts say.

Though the 1918 pandemic is forever associated with Spain, this strain of H1N1 was discovered earlier in Germany, France, the U.K., and the U.S. But similar to the Communist Party’s response to the first cases of COVID-19 in China and, some commentators say, the early days of the virus in the U.S., World War I censorship buried or underplayed those reports in an effort to maintain morale.

President Woodrow Wilson did not make any public statements on the 1918 influenza in the early days of the pandemic. Surgeon General Rupert Blue said, “There is no cause for alarm if proper precautions are observed.” Chicago’s director of public health said: “It is our job to keep people from fear. Worry kills more than the disease.” Woodrow fell ill himself and later suffered a stroke.