'Dear Vladimir Putin, I'm A Big Fan Of Yours!' Senate Intel Report Reveals Donald Trump's Letters To Russian Strongman Praising Him And Begging Him To Come To Miss Universe - And How Ivanka Sat Behind His Desk 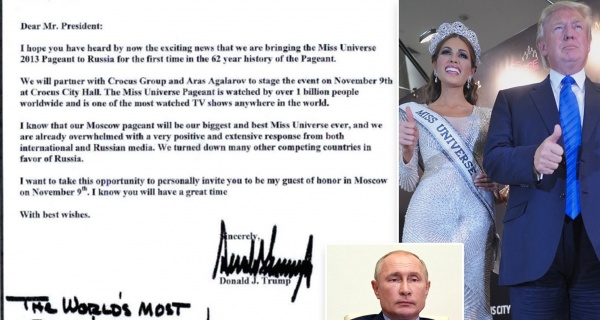 *He added in his own writing: ''THE WORLD'S MOST BEAUTIFUL WOMEN!'

The explosive Senate Intelligence Committee report released Tuesday contains images of correspondence between Donald Trump and Vladimir Putin where the future president seeks to ingratiate himself with the Russian strongman and touts the 'beautiful women' at the Miss Universe pageant.

The images contain hand-written all-caps inscriptions in Trump's familiar hand, at a time when the report reveals he was seeking to bring the beauty pageant to Moscow and his family and subordinates were exploring real estate deals in Russia.

'THE WORLD'S MOST BEAUTIFUL WOMEN!' Trump wrote at the bottom of a June 2013 letter where Trump told Putin he had no doubt heard the news that the Miss Universe Pageant was coming to Russia.

The letter dropped the name of the oligarch, Aras Agalarov, who Trump was partnering with in the venture.

'I want to take this opportunity to personally invite you to be my guest of honor in Moscow,' Trump wrote the leader who the following year would get hit with heavy U.S. sanctions over the invasion of Crimea. 'I know you will have a great time.'

Trump then appended the line about beautiful women in his own hand. Although the line seems designed to entice Putin, according to other passages in the report a variety of people alleged having heard about Trump's encounters with women in Russia during his three known trips there.

An initial draft of the letter, furnished to a longtime Trump aide by British music publicist Rob Goldstone, also included a line stating Trump 'would also hope to meet privately with you during my stay in Moscow.' It got cut from the version included in the report.

The report examined Russian efforts to develop compromising information on people as well as its election interference efforts in 2016.

In an earlier letter, from December 2007, Trump declares himself a 'big fan' of Putin in a letter written during his first two terms in office.

All are penned on Trump Organization stationary.

'Congratulations on being named Time magazine's "Man of the Year" – you definitely deserve it,' Trump wrote, after Putin was named Person of the Year. 'As you probably heard, I am a big fan of yours. Take care of yourself,' he concluded, with the 'big fan' sentence underlined.

It came at a time when Trump associate Felix Sater was exploring Trump real estate projects in Moscow. Trump's salutation was: 'With best wishes.'

The correspondence wasn't all one way.

Following the Miss Universe contest – which Putin did not attend, despite the letter campaign and what witnesses told the committee were conversations on how to bring about a Trump-Putin meeting that did not happen – Putin wrote Trump in Russian and sent a gift.

'Dear Mr. Trump, I would like to congratulate you and your colleagues on successfully holding the Miss Universe contest in Moscow. I hope that all the participants in this remarkable event will go home with good memories of their visit to the Russian capital,' Putin wrote. 'It is a pity that we were not able to have our meeting, but I hope we will be able to talk during one of your upcoming visits to Russia. Yours sincerely, V. Putin.

Enclosed was an image of a gift that Donald Trump Jr. gushed about in his own note to his father.

'DAD - SEE ATTACHED FROM EMIN [Agalarov] – YOU ARE BEING SENT A GIFT FROM PUTIN!'

A September 2013 letter from Trump to Putin also sought to entice him to the Miss Universe pageant. He called it 'the biggest and most important pageant in the world.'

'It will be a great tribute to Moscow and Russia!' Trump gushed. 'We turned down many competing countries in favor of Russia,' he added. Then he issued an invitation: 'I want to take Ibis opportunity to personally invite you to be my Guest of Honor' at the November 9 pageant. 'Additionally, I will be arriving in Moscow a few days prior to the event and if for any reason you would like to meet with me, it would be my great honor.'

The report also details how Trump asked associate Felix Sater to accompany Donald Trump Jr. and Ivanka Trump on their own trip to Moscow to explore projects for his company.

'My kids are going there; I'd feel a lot more comfortable if you were there looking after them,' Sater told the committee Trump asked him.

Sater contacted a 'close friend' to get them a nearly private tour of the Kremlin.

'But then afterwards the curator and translator, once we finished going through some of the Museum-quality rooms, as we're passing, the security guard says: That's the boss's room. And he opens it and he shows an office.'

At that point, Ivanka said: 'Can I sit down behind the chair?' Sater says he told the guard: 'Just trust me; she's the daughter of a VIP from the US.; what's she going to do, steal his pen?'

'And I convinced him to let her sit in the chair. She sat in the chair, spun around two or three times, said "Wow," walked out, and that was it. Then later we went to dinner,' he said.