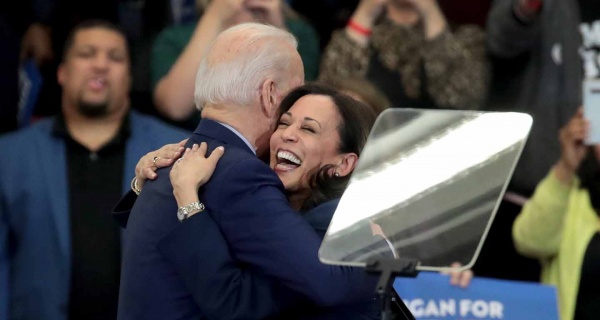 EXCLUSIVE: In an interview with theGrio, Sen. Harris explains why showing up to vote is a life or death matter in the age of COVID-19.

Sen. Kamala Harris (D-CA) has a message for anyone considering sitting out on this year’s presidential election.

Harris, the first Black and South Asian woman VP nominee for a major political party, has won over voters who see her as a fierce advocate for the marginalized and who will give President Donald Trump a run for his money.

Since the VP announcement last week, the Biden-Harris campaign has brought $50 million in new fundraising.

Even former vocal critics are changing their tune due to Harris’ recent efforts around criminal justice reform.

But backlash still came from those who see Democratic presidential presumptive nominee Joe Biden’s choice of Harris as a safe pick, or a problematic one because of her former career as a prosecutor, at a time when the nation is reckoning with race and police brutality.

The controversy is not lost on Harris.

“We have to meet people where they are and address their needs,” Sen. Harris told theGrio in an exclusive interview on Saturday, when asked about voters who are uninspired by her and Joe Biden.

“You may not fall in love with who you’re voting for, but if you just look down on a piece of paper at the issues that are impacting you every day, ” Harris continued.

“Whether you’ve got relatives who have been impacted by the COVID virus, you’re unemployed or trying to get that extra check that unemployment, that six hundred dollars. Or you look at who’s going to pay attention to whether the Black community is going to have equal access to a vaccine when it’s created … There is so much on the line in this election.”

The fever pitch online debate over the Harris selection even moved award-winning filmmaker Ava DuVernay, to post about the stakes of the election, writing:

“There is no debate anymore. There’s no more room for it in my book. We either make this happen or literally more of us perish. ‘Oh but Kamala did this or she didn’t do that.’ I don’t wanna hear anything bad about her,” DuVernay wrote, listing the most egregious actions of the Trump administration. “We need all our energy focussed.”

Harris understands why messages of “vote because people sacrificed” fall short to some. The daughter of two immigrants who met while protesting civil rights, says there’s more to voting than symbolism.

Harris points out Russian interference in the 2016 election and says there is a targeted campaign to keep Black voters at home this November.

“We have to be heard and not let them stop us or prevent us or deter us from exercising our voices,” Harris told theGrio.

When asked, Harris says she wants to be held accountable for showing up for the Black community should she win the White House with Biden.

“Of course. Absolutely. Absolutely. But you know what? That won’t be a subject of conversation if folks don’t vote,” Harris says.

“Hold the current people accountable and look at what they’ve been doing and then decide. Is that working for you?”