Pull Back The Curtain on Efforts To Kill the U.S. Postal Service and Out Pops Koch Money 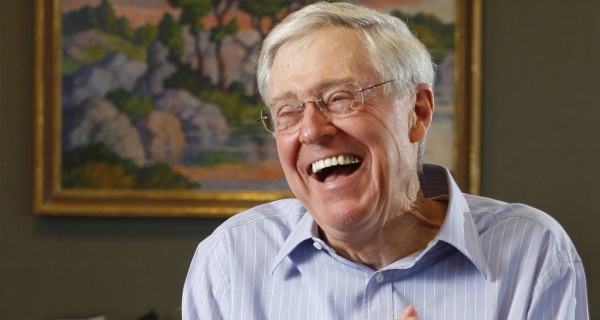 Since May, the nonprofit group funded with Koch’s fossil fuels money, Americans for Prosperity (AFP), has been mobilizing to defeat the House stimulus bill known as the HEROES Act. In a letter sent to members of Congress, AFP Chief Government Affairs Officer Brent Gardner wrote that AFP wants to see the bill killed and specifically mentions it does not want to see a bailout of the Postal Service.

Today, Aaron Gordon at Vice is reporting that he’s gotten his hands on internal documents from the Postal Service which show that orders have come down from above to destroy approximately 500 mail sorting machines – which cost millions of dollars. Witnesses have told Gordon that they’ve seen the machines “destroyed or thrown in the dumpster.” Gordon’s latest report follows yesterday’s news that mail service has been slowed down in multiple parts of the country.

The order to destroy critical equipment comes at a time when President Trump has launched his own campaign against millions of Americans being able to mail their ballots for the November 3 presidential election, saying there will be massive fraud if ballots are mailed. No evidence has emerged to support that assertion. Democrats see the President’s efforts as an attempt to disenfranchise voters because the President is trailing presidential candidate Joe Biden significantly in the polls.

The changes at the Postal Service come after a major Trump donor, Louis DeJoy, became the Postmaster General in June. According to NPR, “DeJoy has contributed more than $1.2 million to the Trump Victory Fund, and millions more to Republican Party organizations and candidates, according to Federal Election Commission records.”

Gordon’s latest bombshell at Vice comes on the heels of another outstanding piece of journalism in July by Lisa Graves of True North Research for In the Public Interest. Graves traces the long history of Charles Koch and his now-deceased brother, David, to privatize the U.S. Postal Service and the insidious means that were used to try to bring that to fruition.

Privatizing the Postal Service was clearly on Koch’s wish list for the Trump administration but other mandates took precedence. As we reported in July:

“Once Trump was in the Oval Office, the Koch machine, known then as Freedom Partners, wasted no time in laying out its agenda for Trump to follow. In a document titled “Roadmap to Repeal: Removing Regulatory Barriers to Opportunity,” the Koch front group lists the laws and regulations it expects to be repealed in the first 100 days of his administration. And like a dutiful courtier, the Trump administration responded quickly. Repeal the Paris Climate Accord – done. Tax cuts for corporations and the wealthy – done. Gutting federal regulations and the Environmental Protection Agency – lots accomplished there.

“One of those was Marc Short, previously President of Freedom Partners, who became Director of Legislative Affairs for Trump. Short is now Chief of Staff to Vice President Mike Pence.

“Kellyanne Conway, the TV defender-in-chief for the Trump administration, previously consulted for Freedom Partners, according to the public watchdog, Public Citizen. Then there was that inexplicable hiring by Trump of 12 Jones Day lawyers on the very day of his inauguration on January 20, 2017. According to Public Citizen, two of the main hires from Jones Day, White House Counsel Don McGahn and Ann Donaldson, Chief of Staff to McGahn, both previously represented Freedom Partners.”

To quote Senator Bernie Sanders, “The agenda of the Koch brothers is to repeal every major piece of legislation that has been signed into law over the past 80 years that has protected the middle class, the elderly, the children, the sick, and the most vulnerable in this country.”

For an absolutely frightening look at Koch’s vision for America, consider what was in their 1980 Libertarian Platform when David Koch ran for Vice President of the United States:

“We urge the repeal of federal campaign finance laws, and the immediate abolition of the despotic Federal Election Commission.”

“We favor the abolition of Medicare and Medicaid programs.”

“We oppose any compulsory insurance or tax-supported plan to provide health services, including those which finance abortion services.”

“We also favor the deregulation of the medical insurance industry.”

“We favor the repeal of the fraudulent, virtually bankrupt, and increasingly oppressive Social Security system. Pending that repeal, participation in Social Security should be made voluntary.”

“We propose the abolition of the governmental Postal Service. The present system, in addition to being inefficient, encourages governmental surveillance of private correspondence. Pending abolition, we call for an end to the monopoly system and for allowing free competition in all aspects of postal service.”

“We oppose all personal and corporate income taxation, including capital gains taxes.”

“We support the eventual repeal of all taxation.”

“As an interim measure, all criminal and civil sanctions against tax evasion should be terminated immediately.”

“We support repeal of all law which impede the ability of any person to find employment, such as minimum wage laws.”

“We advocate the complete separation of education and State. Government schools lead to the indoctrination of children and interfere with the free choice of individuals. Government ownership, operation, regulation, and subsidy of schools and colleges should be ended.”

“We condemn compulsory education laws … and we call for the immediate repeal of such laws.”

“We support the repeal of all taxes on the income or property of private schools, whether profit or non-profit.”

“We support the abolition of the Environmental Protection Agency.”

“We support abolition of the Department of Energy.”

“We call for the dissolution of all government agencies concerned with transportation, including the Department of Transportation.”

“We demand the return of America’s railroad system to private ownership. We call for the privatization of the public roads and national highway system.”

“We specifically oppose laws requiring an individual to buy or use so-called ‘self-protection’ equipment such as safety belts, airbags, or crash helmets.”

“We advocate the abolition of the Federal Aviation Administration.”

“We advocate the abolition of the Food and Drug Administration.”

“We support an end to all subsidies for child-bearing built into our present laws, including all welfare plans and the provision of tax-supported services for children.”

“We oppose all government welfare, relief projects, and ‘aid to the poor’ programs. All these government programs are privacy-invading, paternalistic, demeaning, and inefficient. The proper source of help for such persons is the voluntary efforts of private groups and individuals.”

“We call for the privatization of the inland waterways, and of the distribution system that brings water to industry, agriculture, and households.”

“We call for the repeal of the Occupational Safety and Health Act.”

“We call for the abolition of the Consumer Product Safety Commission.”

“We support the repeal of all state usury laws.”

Now think about this. Item number one on the list, “the repeal of federal campaign finance laws,” was accomplished under the Supreme Court’s Citizens United decision in 2010, ushering in unlimited corporate spending in elections. Americans have been losing ground to the Koch machine ever since.