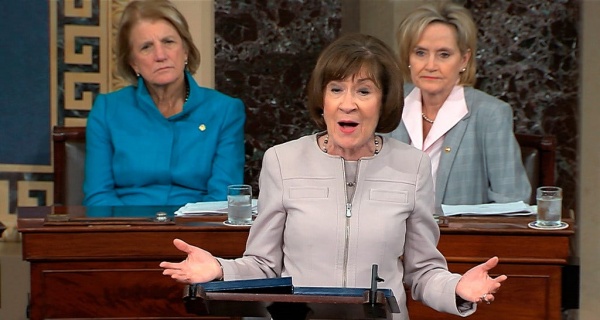 Arizona Sen. Martha McSally handily defeated her primary challenger Tuesday, with the help of an endorsement from President Trump. Her chances of winning the general election are even more closely tied to Trump’s — and she’s embracing that connection. She has attacked the “liberal hack media” for criticizing the president, predicted he will win Arizona in November and repeatedly appeared with him in his visits to the state, following her advisors’ plan to stay close to Trump, even if that means going down with a sinking ship.

She may already be getting a sinking feeling. The U.S. Senate race in Arizona is rated as “lean Democrat” by most analysts. And a recent Marist poll showed her doing even worse than Trump in the state, trailing Democrat Mark Kelly by 12 percentage points. The same survey showed Trump trailing Democratic presidential candidate Joe Biden by 5 points.

Now that McSally has made it past a primary challenge, though, she might benefit from shifting gears. Research suggests Republicans running for the House and Senate this year would benefit from distancing themselves from Trump and the national Republican Party. The problem is … that’s a lot harder than it used to be.

Even in an age of nationalized politics, it still helps to have an independent identity from your party. Voters tend to not like blind loyalty, and prefer representatives who are willing to compromise with the opposition party. In 2018, Republicans who were endorsed by Trump actually did worse in their general election races than Republicans the president ignored or disparaged, all else being equal. And Republicans who opposed their party’s major legislative initiative, repealing Obamacare, did better than those who supported it. One study even found that Trump rallies raised more money for Democrats than they did for Republicans.

The reason GOP senators could benefit from some independence from the White House is that drawing attention to a candidate’s ties to Trump helps polarize a race along the same lines of presidential job approval. And that is a particularly troubling trend for a president with poor approval ratings. For most of his presidency, Trump has had more disapprovers than approvers in Arizona and other states with competitive Senate races, including Colorado and Maine. Linked to Trump, the Republican senators in those states are now getting the same treatment; McSally, Cory Gardner in Colorado and Susan Collins in Maine all have negative net approval ratings.

As political scientist (and co-author of the study finding negative effects of Trump endorsements) Andrew Ballard told me, “Unpopular presidents probably need to be very strategic and judicious with their usage of their platform to endorse candidates, because in certain situations it can do more harm than good.” Trump failed to follow this advice in 2018 and doesn’t seem to be paying it any more heed this year. And most GOP senators are not effectively keeping their distance from Trump.

Senators up for reelection are siding with Trump

Trump may not be able to resist intervening in Senate and House races, given his desire for being the center of attention. But Republican legislators have choices about how to present themselves. So far, they are sticking with Trump.

McSally supported repealing Obamacare, opposed the president’s impeachment and has rarely publicly criticized the Trump administration. That is a big shift from 2016, when she chose not to endorse Trump and bashed his behavior. Moreover, McSally has voted with Trump’s position 95 percent of the time over the last two congressional sessions — far more often than you’d expect based on Arizona’s politics. In fact, in the Senate, McSally has the fourth highest “Trump Plus-Minus” score, which measures how often a member of Congress votes in line with the president’s position relative to what you would expect from that member based on the partisanship of their state or district.

Other Republican senators up for reelection this year have also remained loyal to Trump’s positions. Gardner has voted with Trump 89 percent of the time during the 115th and 116th Congresses (he has the second highest “Trump Plus-Minus”), Thom Tillis (North Carolina) with Trump 93 percent of the time, David Perdue (Georgia) 95 percent, Joni Ernst (Iowa) 91 percent and Steve Daines (Montana) 86 percent.

The one partial exception is Collins, who has sided with Trump two-thirds of the time over the last two Congresses (though that is still far more than expected based on Trump’s losing margin in Maine). Collins has clearly tried to put some distance between herself and Trump as her reelection race draws nearer — but not too much. She did not support Obamacare repeal, though she voted to acquit the president in his Senate trial and voted to confirm his Supreme Court nominees. She went from voting with Trump 77 percent of the time in the 115th Congress (2017-18) to only 46 percent in the 116th (2019-20).

It’s been a tough balancing act that may end up pleasing no one. Indeed, Collins has become the poster child for Republicans’ unwillingness to seriously break with Trump. She has been “disappointed” in Trump without taking action to restrain him so often that “Saturday Night Live” did a skit about it.

Still, Collins may still have a chance to retain an independent reputation, something she’s cultivated for years by necessity in blue-ish Maine. The problem is … that’s harder to do these days.

Many members of Congress used to have local reputations independent of their parties, presenting themselves as fighters for local interests and dollars in Washington. Even if most voters hated Congress, they still liked their own representatives and senators.

But the long-term trends are nationalization (voters perceive their representatives through the lens of national and presidential politics) and polarization (voters see the parties as distinct and agree more with one side). Voters learn less about their own legislators and more about the president, in part due to decreasing reliance on local news. As a result, fewer voters split their tickets, voting for one party’s candidate for president and the other’s for Senate or the House.

Democrats have faced the same problem in trying to distinguish themselves from their party. Voters recognized the independent streak of West Virginia’s Joe Manchin and Montana’s Jon Tester in the 2018 midterms, but Missouri’s Claire McCaskill, North Dakota’s Heidi Heitkamp, and Indiana’s Joe Donnelly weren’t able to overcome the Republican lean of their states. Manchin went so far as to appear in ads showing him shooting at policies he disliked and proclaiming “for me, it’s all about West Virginia.” He won a state that Hillary Clinton lost by more than 42 points.

Nationalization makes it more difficult for senators to be seen as separated from their party’s president and his priorities. So even if Republican senators do break with Trump, fewer voters now learn about it because they no longer see state-specific news. Since voters tend to assume that partisans vote like their parties, voters are often unable to perceive moderate senators’ divergent policy positions.

And legislators who do break with their party now face a risk of a primary challenger. McSally won her 2018 Republican primary facing two candidates closely tied to Trump: Joe Arpaio and Kelli Ward. In this year’s race to defend the seat she was appointed to, McSally this week fended off a primary challenge from Daniel McCarthy, who tried to build support from local pro-Trump groups.

“More [congressional] members are running scared in the primaries,” political scientist Sarah Treul told me. “Even if they’re actually not having quality challengers emerging, they’re afraid of it happening. And I think a lot of them are spending time trying to figure out how [they] can ward off one of those challengers from even coming to the table.”

That usually means doing little to upset the party’s base by breaking with the president.

Now that primary season is coming to an end, will Republicans start separating themselves from Trump? Some probably don’t need to do so to win reelection. Despite his national unpopularity, senators in more Trump-leaning states, such as Ernst in Iowa and Daines in Montana, may be able to survive with a standard partisan vote.

But McSally, Collins, Gardner in Colorado and Tillis in North Carolina likely need to earn a substantial number of votes from Biden supporters to survive. It’s just not clear whether they will break with Trump in public ways or whether late breaks would be enough to help them win.

That said, they may have one option to rally both the Republican faithful and a few swing voters. It turns out some voters fear giving unified government to the president’s party and desire some balance. If voters expect a Democratic president, they are slightly more likely to support Republicans in Congress, which could perhaps keep the Senate in GOP hands.

So terrible Trump polls could be turned into something useful by Republican senators. They might eventually need to argue that, if Trump is going to lose, voters should trust them to serve as a check on the Democratic agenda.