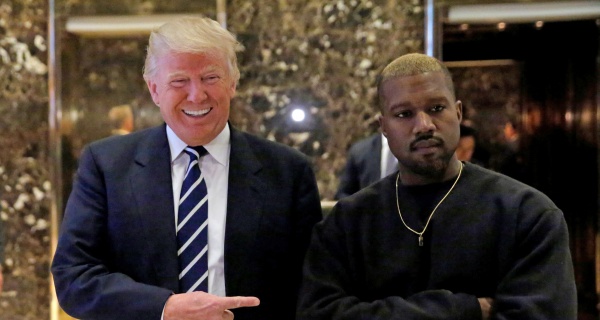 In July, Trump retweeted an article that said Kanye could be trying to siphon Black votes from Biden, writing that it "shouldn't be hard" for West to do.

West's bid has been marred by missed deadlines and faulty filings that have frustrated his efforts to make the ballot in enough states to actually win the presidential election.

But people connected to Republican politics have worked to get him on the ballot in states like Missouri, Arkansas, and Illinois. And his fledgling campaign did successfully submit paperwork Tuesday aimed at getting on the ballot in Wisconsin, a pivotal battleground state President Donald Trump won by about 23,000 votes in 2016, seemingly with Republican help.

While West won't officially secure ballot access until the state's Election Commission can validate his signatures, the specter of West appearing on a ballot in such a key state has upped the stakes for his quixotic campaign.

"It's hard not to feel like Republican operatives are using a mentally ill, very famous rapper who is not going to be president because they think for some reason that it's going to take Black votes away from Joe Biden," said Jesse Lehrich, a Democratic strategist who worked for Hillary Clinton's campaign in 2016.

"To the extent that people are using him for their own political gain, it's pretty gross and I hope he gets whatever help he needs."

Last month, West sent a series of tweets that included a claim his family was trying to "lock me up."

His wife, Kim Kardashian West, said last month in an Instagram post that West has bipolar disorder and said that "his words sometimes do not align with his intentions."

West’s recent political history had, up until his presidential bid, been defined by his relationship with Trump. He heaped praise on Trump during a 2018 Oval Office visit where he donned a “Make America Great Again” hat, and his wife has repeatedly lobbied the administration on criminal justice reform, successfully pushing for Trump to commute the sentence of a woman jailed on nonviolent drug charges.

West addressed a potential bid during a June interview with Forbes where he criticized Democrats and former Vice President Joe Biden, while also floating conspiracy theories about vaccines and laying out his opposition to abortion rights.

"I'm not saying Trump's in my way, he may be a part of my way. And Joe Biden? Like come on man, please," he told Forbes.

So far, West has only officially qualified for the ballot in Oklahoma, a state that simply required West to cut a check for $35,000 in lieu of gathering signatures.

West's lawyers dropped their effort to make the New Jersey ballot after a local lawyer challenged the veracity of his petition signatures.

In Wisconsin, after local media captured video of a woman delivering West's signatures Tuesday, Vice identified her as Lane Ruhland, a veteran elections lawyer in the state who has represented the Republican National Committee and advised the state Republican Party.

Ruhland is currently representing Trump in a lawsuit against an NBC News-affiliated local station for defamation after it ran an anti-Trump ad, as first reported by New York Magazine.

When asked to identify Ruhland in the video, Alesha Guenther, the communications director for the Wisconsin GOP, said: "It appears that the Kanye West campaign made a smart decision by hiring an experienced election attorney," adding the party looks forward to "delivering Wisconsin's 10 electoral votes to President Trump."

An analysis of West’s Wisconsin electors show that two donated to Trump’s re-election campaign in June of this year.

Other Republicans are involved in West's efforts in other states.

Republican operative Gregg Keller was listed on West's paperwork in Arkansas as a point-of-contact. Keller previously worked for prominent GOP groups like the American Conservatives Union and has worked for a slew of Republican politicians.

One of West's designated Missouri electors, Jane Drummond, is a member of the Republican National Lawyers Association. Keller nor Drummond responded to immediate requests for comment.

West is also enlisting those with experience getting Republicans on the ballot to help him gather signatures. One of the canvassers collecting signatures for West said that Mark Jacoby, an executive at the petitioning firm Let the Voters Decide, had been recruiting people to canvas for West in Illinois. Jacoby was arrested in 2008 and later pleaded guilty to charges of voter fraud after dozens of California voters said they were tricked into registering to vote as Republicans.

Let the Voters Decide declined to comment on Jacoby's work for West's campaign. Jacoby could not be reached for comment.

The links between Republicans and West have prompted frustration among some Democrats.

"Just a Republican operative trying to get Kanye West on the ballot. What a disgusting dirty trick that shows no respect for voters or whatever Kanye is going through," Ben Rhodes, former President Obama's deputy national security adviser, and an MSNBC analyst, tweeted Tuesday.

In the past, there have been examples of political operatives from both parties trying to boost a rival candidate’s fortunes in order to bolster their bids. This year, a group with ties to Democrats spent millions of dollars in a failed effort to help a controversial GOP Senate candidate win his primary despite Republican concerns his victory could make it easier for Democrats to win in the fall.

West's recent criticism of Biden on racial issues echoes the Trump campaign's attempt to attack the Democrat's standing with a core constituency.

In July, Trump retweeted an article that said Kanye could be trying to siphon Black votes from Biden, writing that it "shouldn't be hard" for West to do. And his campaign has spent at least $1.1 million to run an ad that argues that "Joe Biden's policies destroyed millions of Black lives," pointing to his support for the 1992 criminal justice reform bill, according to data from Advertising Analytics.

Biden has admitted portions of the crime bill didn't work as intended, and his criminal justice plan rolls back a handful of reforms enacted at the time. He told MSNBC in May that criminal justice reform will be an "enormous" emphasis for his administration, and that prisons "lock up too many Black and brown individuals."

If West does make the ballot, Lehrich said he was skeptical that West would be a net-negative for Biden over Trump, noting that many of Trump's 2016 supporters backed him due to his outsider status. And he added that West's history of controversial comments — he apologized in 2018 after calling slavery a "choice" and attacked abolitionist hero Harriet Tubman during his first campaign event in South Carolina last month — may repel Black voters too.

"It's honestly an insult to Black voters' intelligence to assume that they are going to vote for Kanye West because he's a black rapper," he said.