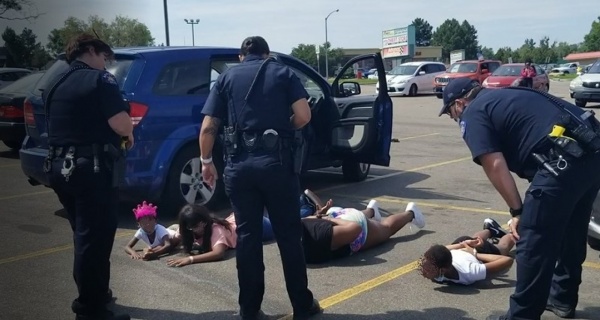 A Black mother and four children had guns drawn on them by police, who were supposed to be searching for a stolen motorcycle from another state.

Police officers in Aurora, Colorado wrongly handcuffed and detained a Black mother and four children on Sunday (Aug. 2) after mistaking their SUV for a stolen motorcycle. Brittney Gilliam was with her 6-year-old daughter, 12-year-old sister, and teenage nieces when police pulled up behind them, drew their guns and ordered them out of the car.

“That was terrifying. As a parent, it was heartbreaking,” Gilliam told ABC News affiliate Denver 7.

Video of the arrest captured by witnesses showed a group of officers forcing the kids to lay face-down on the concrete while they questioned Gilliam about her car. The car was not stolen. Instead, police were supposed to be looking for a stolen motorcycle from another state, which had the same license plate number as the SUV.

Interim police chief Vanessa Williams, who was recently recommended by the city council to fulfill the position permanently, apologized to the family and said it was an error by the department’s license plate reader that caused the mistake.

“We first want to offer our apologies to the family involved in the traumatic incident involving a police stop of their vehicle yesterday,” Williams said in a statement.

“We have been training our officers that when they contact a suspected stolen car, they should do what is called a high-risk stop. This involves drawing their weapons and ordering all occupants to exit the car and lie prone on the ground. But we must allow our officers to have discretion and to deviate from this process when different scenarios present themselves. I have already directed my team to look at new practices and training.”

Gilliam said the incident left her daughter traumatized and with a new perception of police.

In her statement, Williams added that the city will cover “age-appropriate therapy” for the kids.

“I have called the family to apologize and to offer any help we can provide, especially for the children who may have been traumatized by yesterday’s events. I have reached out to our victim advocates so we can offer age-appropriate therapy that the city will cover.”

According to Williams, an internal investigation has already been launched into the incident.