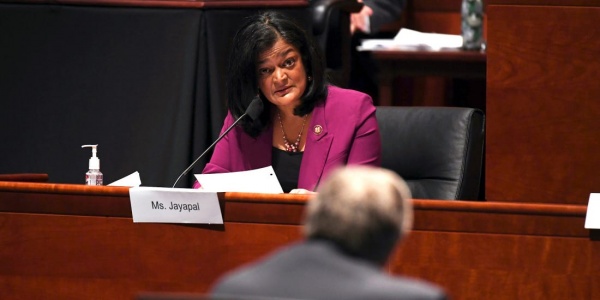 “I’m starting to lose my temper,” Jayapal said as the attorney general tried to interrupt her

Attorney General William Barr appeared before the House Judiciary Committee on Tuesday to answer for the Trump administration’s move to invade cities like Portland, Oregon, where federal agents have recently been brutalizing demonstrators. He ran into questioning from committee Democrats, particularly Rep. Pramila Jayapal (D-Wash.). The Democrat took the attorney general to task for sending troops to quell Black Lives Matter demonstrations but doing nothing when armed militias swarmed government buildings in Michigan and elsewhere to demand the economy reopen during the coronavirus pandemic.

Jayapal began by asking Barr whether he felt it was appropriate to order federal officers to “tear gas, pepper spray, and beat protesters” in Lafayette Park, in Washington, D.C., so that President Trump could walk to St. John’s Church to brandish a Bible for a photo op, Barr ignored the question to dispute whether tear gas was used. Jayapal rightly pointed out that this is a semantic distinction that has been widely debunked. Tear gas-like chemical agents were indeed used on peaceful demonstrators, according to U.S. Park Police.

“I don’t accept your characterization of what happened,” Barr said.

“I’m starting to lose my temper,” Jayapal shot back as Barr began to interrupt her next question.

Jayapal then brought up comments Trump made to governors about the need to “dominate” Black Lives Matter demonstrators, noting that he was going to “activate” Barr “strongly” to handle the issue. But as Jayapal notes, Barr was in no way activated to tamp down protests against stay-at-home orders during the pandemic, because those protesters were pushing Trump’s agenda to get the economy up and running. Never mind that many of those protesters were armed, sporting Swastikas, Confederate flags, and, in Michigan, calling for Governor Gretchen Whitmer to be lynched.

“The point I’m trying to make,” Jayapal continued, “is that there is a real discrepancy between how you react as the attorney general. When white men with Swastikas storm a government building with guns there is no need for the president to ‘activate’ you because they’re getting the president’s personal agenda done. But when black people and people of color protest police brutality, systemic racism, and the president’s very own lack of response to those critical issues, then you forcibly remove them with armed federal officers and pepper bombs, because they are considered terrorists by the president.”

Barr tried to interrupt by arguing that he has a responsibility to the federal government and shouldn’t be involved in demonstrations in Michigan, conveniently ignoring Trump’s quote to governors that he would “activate” Barr to deal with protesters, or the fact that federal officers have been sent to Portland, which *checks notes* is not federally controlled territory. Jayapal wasn’t having it.

“You are supposed to represent the people of the United States of America, not violate people’s First Amendment rights,” she concluded. “You are supposed to uphold democracy and secure equal justice under the law, not violently dismantle certain protesters based on the president’s personal agenda.”