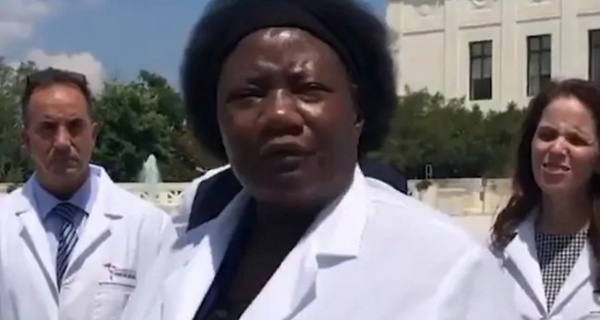 Monday night, Trump retweeted a video from Houston-based “doctor” Stella Immanuel promoting hydroxychloroquine as a coronavirus cure. It’s no accident I put “doctor” in quotes. In that same video, Immanuel claimed you don’t need to wear a mask to protect others from this virus. For this and other reasons, it has been spiked on all major social media platforms.

Will Sommer of The Daily Beast and Right Richter did a deep dive into the good “doctor.” What he found was someone who is a disgrace to the medical profession in every possible sense. What Sommer found is so bonkers that I figured we need to turn the hot lights on her even higher.

Immanuel, a pediatrician, and a religious minister has a history of making bizarre claims about medical topics and other issues. She has often claimed that gynecological problems like cysts and endometriosis are in fact caused by people having sex in their dreams with demons and witches.

She alleges alien DNA is currently used in medical treatments, and that scientists are cooking up a vaccine to prevent people from being religious. And, despite appearing in Washington, D.C. to lobby Congress on Monday, she has said that the government is run in part not by humans but by “reptilians” and other aliens.

Immanuel, a native of Cameroon, runs her medical practice out of a Houston strip mall next door to her church, Firepower Ministries. Sommer managed to get an archive of her Website before it and others connected to her got slashdotted (they’re returning 500 errors as of Tuesday afternoon). Among other things, she believes that a host of medical issues are caused by intercourse with “spirit husbands” and “spirit wives.” In other words, if you have sex with witches and demons in your dreams, you’re opening yourself up to disease.

She is also a full-blown conspiracy theorist. For instance, in 2015, she claimed that the Illuminati slipped alien DNA into some of our medicines. In another 2015 sermon, she claimed that there’s a gene that makes you religious—and scientists developed a vaccine to suppress it. Although she holds herself out as a pediatrician, she loudly champions corporal punishment.

Apparently Tea Party Patriots, which organized the gathering at which Immanuel spoke, must not have had any idea what they were getting. At the tail end of the video, people are seen trying to pull her away from the microphone.

Not surprisingly, Immanuel was not happy to find out that the video had been ixnayed. She actually threatened to pray for a DoS attack on Facebook if it didn’t restore the video.

This, ladies and gentlemen, is who Trump saw fit to endorse earlier.