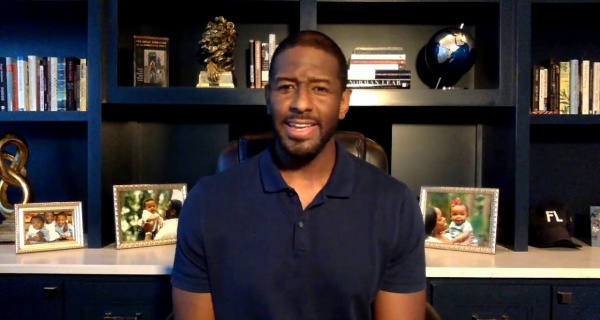 It was Gillum's first public statement in months.

Andrew Gillum made a surprise return to public life on Monday by releasing a video testimonial to provide what he called a “personal update” on his life since he entered rehab months ago. The former Florida gubernatorial candidate offered a candid testimonial of the trials and tribulations he’s faced since that fateful night in March when he was involved in an incident in a Miami hotel that he said prompted him to take a good look at himself.

Specifically addressing alcoholism and depression since losing the 2018 midterm election, Gillum spoke openly and honestly about the personal demons he said he was forced to confront while in rehab.

However, when it came to addressing what exactly led him to enter rehab, Gillum was light on details and instead lamented how ashamed he was.

“While my stuff had to be public and cause great embarrassment, lots of rumors, false, some true — the shame that I felt from all of that, from the harm that I had caused was tearing me up,” he said. “I needed real help to try to unpack that.

Gillum did not go into specifics about what happened that early morning of March 13 when Gillum was found inebriated and unresponsive in a compromising position with two other men in a hotel room where a police report indicated there was suspected drug use. A series of graphic photos purportedly of Gillum from inside the hotel room showed drugs. Gillum quickly released a brief public statement apologizing and saying he had too much to drink before he voluntarily entered rehab day later.

He said that while in rehab he was able to begin therapy and confessed that the loss in the governor’s race affected him deeper than he let on.

“The impact that losing the race for governor had on my life and on the way those impacts started to show up in every aspect of my life,” Gillum said. “It was a constant reminder of failure; a reminder that I had let so many people down.”

He said he used alcohol “to suppress and numb” his depression from losing the election, which also forced him out of public office for the first time in more than a dozen years, leaving him unsure of how to proceed.

“The thing I knew how to do well … all of that was all of a sudden gone and it really did cause me to think about my own purpose and my own value,” he said. “I tried to suppress, I tried to ignore” while “suffering in silence because I simply could not bring myself to deal square on with what was happening more deeply inside of me.”

If there was any doubt about the state of his marriage, Gillum set the record straight.

He called R. Jai Gillum “my life partner” and said “she knows everything that I am and everything that I am not. She chooses to love me anyhow.” Gillum said she stood by him, encouraged him and told him that even though the future may seem uncertain, she believes that “this is the beginning and the best is yet to come.”

Perhaps what has affected Gillum most is him not being able to participate in the protests that have arisen since the police killing of George Floyd in Minneapolis. Gillum had already entered rehab when Floyd was killed, preventing him from being with the people. He needed to help himself before he could work to help anyone else, he said.

“This is a tough moment not to be out in the world and contributing. I have found it particularly difficult,” he said.

Watch his video below.