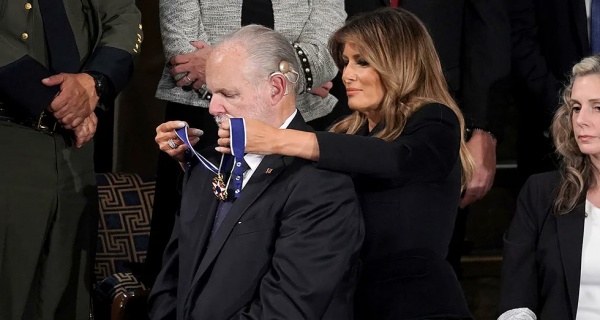 Rush Limbaugh, who's currently undergoing chemotherapy treatment for advanced lung cancer, lauded Trump for bringing up the conspiracy that MSNBC anchor Joe Scarborough killed his 28-year-old then-congressional aide Lori Klausutis, even though the medical examiner determined her death was accidental.

Trump promotes conspiracies "in a really clever way, and this is where people don't get the subtlety of Trump because they don't think he has the ability to be subtle," Limbaugh said. "Trump never says that he believes these conspiracy theories that he touts. He simply passes them on. ... He spreads them ... under the guise of people need to know about this."

He said: "You think Trump cares whether Scarborough murdered anybody or not? No! Of course he doesn't care. So why is he tweeting it? Well, because it's out there. He didn't make it up. It's long been out there that this death has something suspicious about it. So, Trump is just throwing gasoline on a fire, and he's having fun watching the flames."

Trump has frequently taken to social media in recent weeks to question whether Klausutis died of natural causes, alleging that the MSNBC host could have “got[ten] away with murder."

The president has disregarded Klausutis's widower's pleas for him and others to stop spreading "bile and misinformation" regarding his wife's death.

Klausutis passed out while she was alone in Scarborough's congressional office. When she fell, she hit her head on a desk and died as a "result of an acute subdural hematoma."